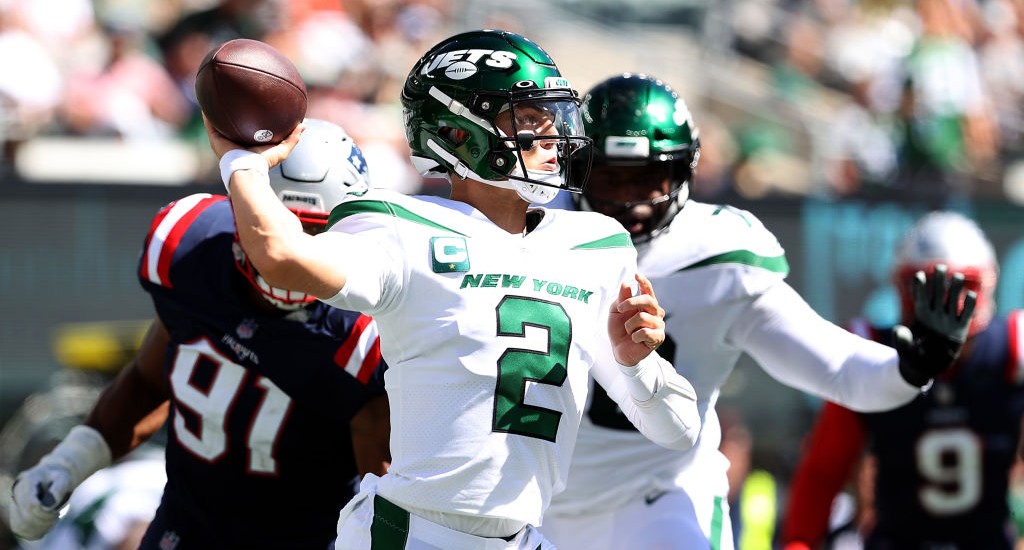 The New York Jets are a very bad football team and have been for quite some time. Taking a quarterback No. 2 overall wasn’t going to magically fix that overnight, but the Jets did hope that Zach Wilson out of BYU would provide them some promise and stability at that position that they haven’t had since, really, Chad Pennington.

However, things have not gotten off to a great start for Wilson in the NFL, as he has looked the part of a young quarterback playing on a team that is less talented than the rest of the league. However, while his first performance against Carolina was your run of the mill uneven young quarterbacking, his second game against the Patriots was downright awful. In the first 35 minutes of play, Wilson managed to throw not one, not two, not three, but FOUR interceptions, each getting progressively worse.

The first was a ball he forced into traffic under pressure that bounced in the air and got picked. It happens.

The second was a high throw that bounced off Corey Davis’ hands and was, again, picked off the tip. Not a perfect throw but, the old adage in the NFL is if it hits the receivers hands, it’s supposed to be a catch. Alright, that’s one bad luck pick and one unfortunate luck (but forced) one. Just gotta move on.

This is where things go from unfortunate to outright dreadful. This is a pass that is an underthrown duck with no chance to a receiver who is not open. Bad combination.

Somehow, though, that wasn’t the worst of them. That honor belongs to interception No. 4 in which Wilson either overthrows an underneath receiver or underthrows the deep receiver, fluttering a flat-footed ball directly to the DB despite having a clean pocket in front of him.

The last two picks are the most concerning if you’re a Jets fan, as Wilson’s footwork can get very sloppy even when not under pressure and those throws that maybe fell harmlessly at BYU end up getting picked off in the NFL. The good news is he’s not alone in the world of rookie quarterbacks struggling to start the season, as Trevor Lawrence is also piling up the interceptions (albeit with more flashes of great throws sprinkled in between). That said, if, like Sam Darnold famously said early in his time with the Jets, Wilson is seeing ghosts now, that can be hard to shake and it might be a long season in New York for Wilson and the Jets faithful (again).