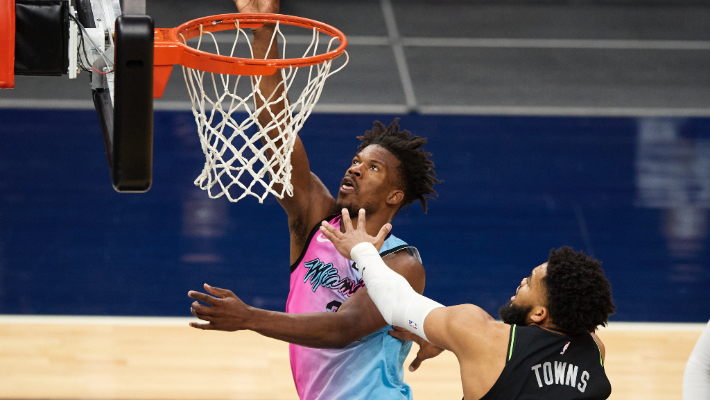 The Miami Heat and Minnesota Timberwolves played on Friday night in a game that has some seeding implications for the former and another chance for the latter’s young core to build chemistry with one another. It also included Jimmy Butler going up against one of his old teams, which gave him the opportunity to go at one of his former teammates.

The on-court mics caught some of the jawing that went back and forth between Butler and Karl-Anthony Towns before Bam Adebayo took a free throw — it got to the point that a pair of Timberwolves, Juancho Hernangomez and Jarred Vanderbilt, stepped in between the two of them to keep things from really boiling over. Some of the back-and-forth is muddled, but two lines from Butler were clear: “You’re a loser, I already punked you once.”

As a refresher, Butler’s time in Minnesota came to an end after, among other things, a practice in which he famously played with the third-stringers and took it to the starters, led by Towns. One report of the practice indicated that Butler made it a point to go at Towns relentlessly, which rendered the big man “distraught and speechless.” Butler was eventually dealt to the Philadelphia 76ers, and while a few years has passed since all of this, it’s evident that he has a pretty long memory.