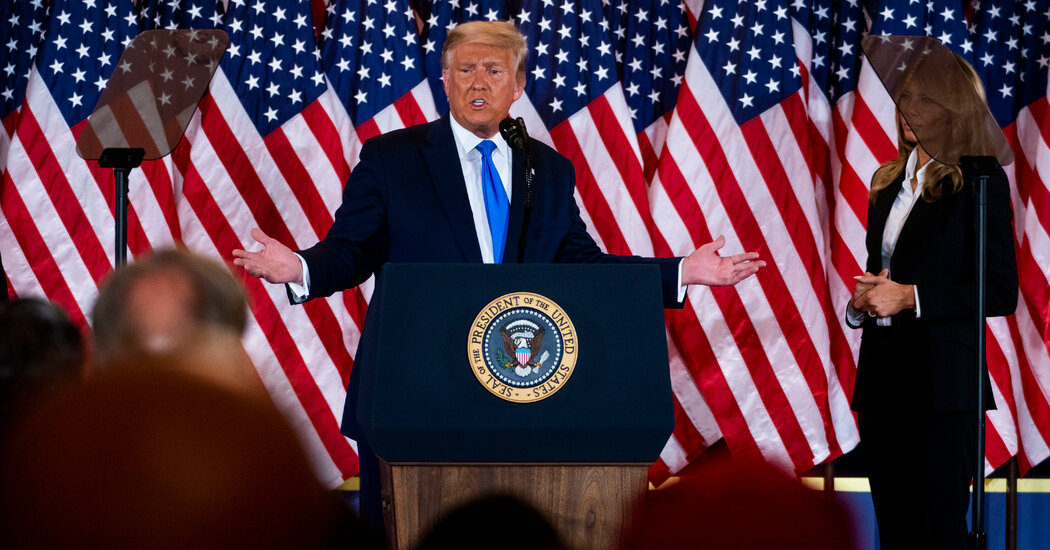 When President Aleksandr Lukashenko of Belarus declared an implausible landslide victory in an election in August, the United States and other Western nations denounced what they said was brazen defiance of the voters’ will.

But just months later, President Trump and various of his supporters are borrowing from Mr. Lukashenko’s playbook in declaring Mr. Trump the winner of an election — despite all evidence to the contrary. The Times called officials in every state, representing both political parties. None reported any major voting issues, in a forceful rejection of Mr. Trump’s narrative.

Mr. Trump’s actions place him among other such anti-democratic leaders as Robert Mugabe of Zimbabwe, Nicolás Maduro of Venezuela and Slobodan Milosevic of Serbia. Experts warn he risks “creating a new model” for like-minded populists in Europe and elsewhere.

Biden’s policy agenda: President-elect Joe Biden’s transition team is preparing multiple sets of policy proposals, including the ambitious agenda laid out in his winning campaign, while acknowledging it may have to be pared back in recognition of divided government.

Call me, maybe: Along with the leaders of France and Germany, Prime Minister Boris Johnson of Britain was included in Mr. Biden’s first round of calls — closely followed by Prime Minister Micheal Martin, in a clear nod to the president-elect’s ties to Ireland.

Six years ago, at the start of his presidency, President Abdel Fattah el-Sisi of Egypt vowed to put improved health care “at the heart” of his agenda. But it hasn’t worked out like that, in a country where the military’s needs always come first.

The pandemic has exposed chronic weaknesses in Egypt’s underfunded public health system and in Mr. el-Sisi’s rule, where a tiered system of privilege rewards a powerful military — often at the expense of an increasingly poor citizenry. Early on, hospitals struggled, doctors went on strike and Egypt soon had one of the highest fatality rates in the Arab world.

“Weapons purchases and vanity megaprojects have been his priorities, even during the pandemic,” said one Egypt scholar. “And that has diverted scarce government resources from the critical needs of the Egyptian people.”

By the numbers: In the region, Egypt’s testing rate, at 953 tests per 100,000 people, exceeds only the figures of countries in crisis like Yemen and Syria, and is far behind the rate in Iraq, Jordan and even war-torn Libya.

Quotable: “People tend to believe the pandemic is over,” Dr. Pierre Nabeth of the World Health Organization said. “This is an alarming situation because in fact the winter season is starting.”

On Tuesday, Chancellor Sebastian Kurz of Austria and President Emmanuel Macron of France met in Paris to discuss antiterrorism measures in the wake of attacks in their countries. The meeting, analysts said, was as much about the two leaders’ domestic political concerns — Mr. Macron is hoping to stave off the far right leader Marine Le Pen in an upcoming election — as it was about curbing terror.

Mr. Kurtz yesterday announced sweeping new legislative proposals as part of a wider crackdown on Islamist terror, including allowing courts to extend the sentences of convicted terrorists and establishing a new criminal offense for people who “create the breeding ground” for terrorism.

France’s concerns continue. An explosion wounded at least two people at a non-Muslim cemetery in Jeddah, Saudi Arabia, during a ceremony organized by the French consulate on Wednesday. The attack came at a time of heightened tensions between France and a number of Muslim countries.

Mozambique: The United Nations called for an investigation into reports of many people beheaded in nor thern Mozambique

Advertisement
, where Islamist insurgents have stepped up a brutal campaign against civilians.

When President-elect Joe Biden thanked Black voters in his victory speech for rescuing his campaign and promised to return the favor, not everyone was cheering. Above, a bar in Atlanta during the speech.

Over two dozen interviews, African-American voters said they expected the administration to prove its sincerity by addressing racial inequality. The pressure on Mr. Biden may be even greater because of the recent summer of protests over police brutality and systemic racism.

Princess Diana: A quarter-century after the princess admitted infidelity in a landmark interview with Martin Bashir, the journalist faces renewed accusations of behaving unethically to secure the scoop. The BBC announced that it would open an independent investigation into the allegations.

Myanmar elections: The party of Daw Aung San Suu Kyi secured even more seats in Parliament than in 2015, when the government began a power-sharing agreement with the military. Many voters from ethnic minorities were prevented from casting their ballots.

Snapshot: Above, couriers in Beijing getting ready to make deliveries. In the weeks before China’s Singles’ Day, the online shopping mega-event, mail couriers have joined strikes and protests to draw greater attention to their low wages and grueling working conditions.

Fig tree’s reprieve: In Kenya, a cherished 100-year-old tree, slated for removal to make room for a new expressway, will survive to see another day after a backlash from environmentalists in Nairobi.

Lives Lived: Natan Zach, an Israeli poet who helped revolutionize Hebrew poetry by spurning his more established contemporaries’ formality in favor of plain-spoken, even blunt verse, died at 89 last week. Here are two of his poems in translation.

Cook: This carrot cake is warmly spiced with cinnamon, packed with coconut, raisins and nuts and finished with a tangy cream cheese dressing.

Listen: Discover and enjoy the soaring voices of Maria Callas, Jessye Norman, Leontyne Price, Renée Fleming and others with five minutes that will make you love sopranos.

Do: A new study has found that exercise may help to fight cancer by changing the inner workings of certain immune cells.

Bake a pie, fly a kite, try some yoga. Whatever it is, our At Home collection will show you how.

How U.S. pollsters got it wrong

Lisa Lehrer, who writes the newsletter On Politics, spoke to Charles Franklin, the director of Wisconsin’s best-known political survey, about why polls got it wrong, again. This transcript has been excerpted from the original.

Why did pollsters have so much trouble finding Trump supporters?

I don’t think this is the “shy Trump” voter in the way we’ve understood it, as people not wanting to admit they’re voting for him.

I’m more inclined to think we’re seeing a phenomenon of some fairly small segment who systematically decline to do surveys altogether, who are pretty anti-press, anti-polls and in a lot of ways anti-conventional political engagement. They may also be people who are not, in fact, strongly identified with the Republican Party.

The Times conducted a large number of polls this cycle that had many of the same problems. We’re not blameless either. Is there a better way that media organizations should be using polling?

It may be that we were looking for hints of problems different from the ones we actually experienced. To quote a former defense secretary, it’s always the unknown unknowns rather than the known unknowns. Despite trying to find sources of error, we failed to do it.

Are you worried about the reputation of polling, especially in an environment where the president has politicized the polls?

The obvious and not wrong impression is that the polling had a really bad year. That means that for the next four years at least, we’ll be talking just like we are today about what went wrong with polling.

I don’t have a happy ending to this story except, you know, wait for 2024 and let’s hope we do a lot better.

That’s it for this briefing. Join me for more on Friday.

Thank you
Theodore Kim and Jahaan Singh wrote the break from the news. You can reach the team at [email protected].

P.S.
• We’re listening to “The Daily.” Our latest episode is about the battle for the Senate in Georgia.
• Here’s our Mini Crossword, and a clue: Flex (four letters). You can find all our puzzles here.
• The word “hipsterizer” first appeared in The Times this week, in this ursine story that bears reading, according to the Twitter account @NYT_first_said.
• Reprints of the Nov. 8 edition of the paper, with the front-page headline “Biden Beats Trump,” are available now on The Times’s online store.