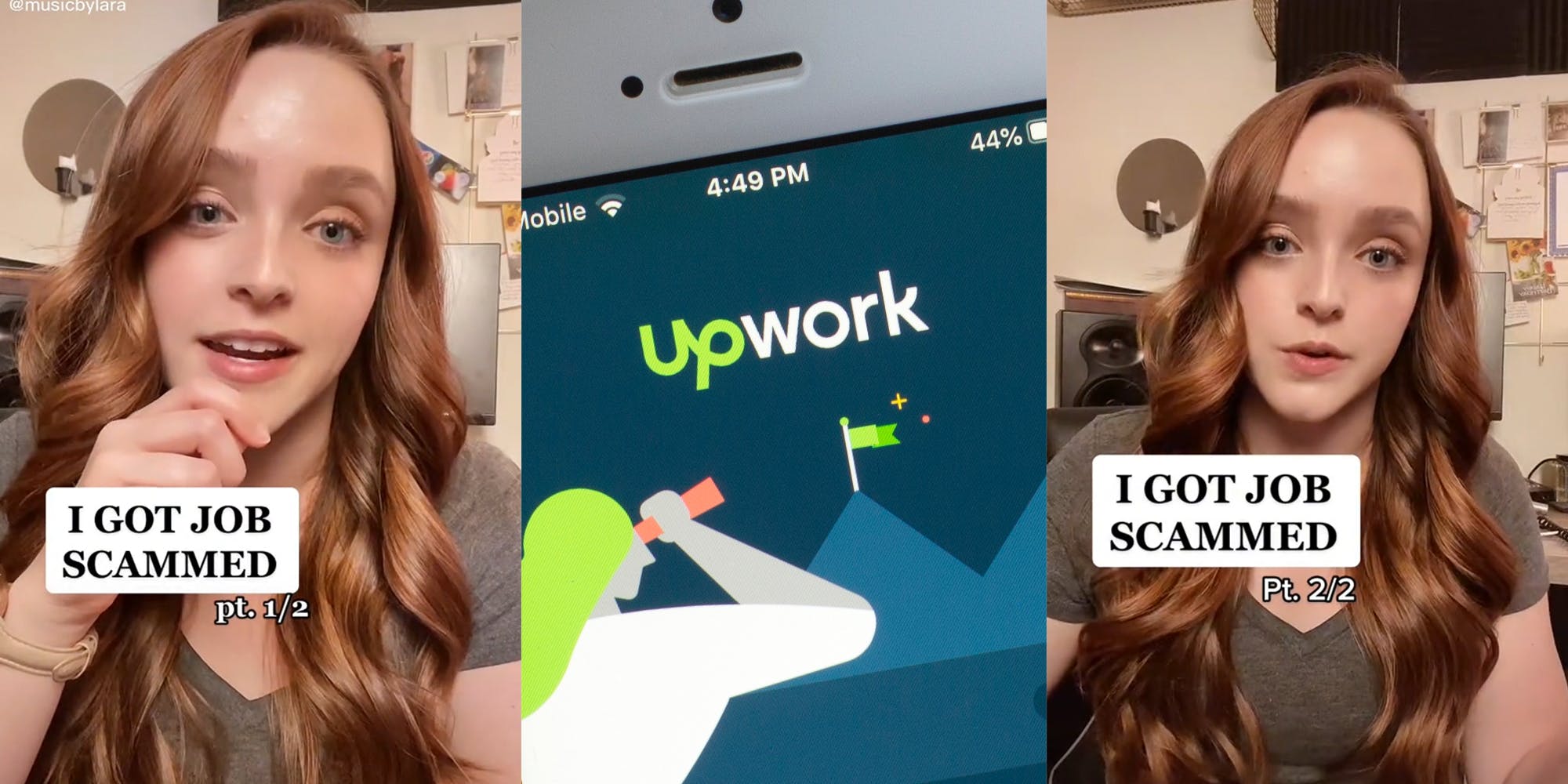 A TikToker says she was almost scammed out of $2,000 after she applied for a freelance position on Upwork, and she is sharing her story in the hopes that it will prevent another freelancer from being taken advantage of.

Lara @musicbylara told viewers she thought she was hired for a part-time proofreader position with a food website, Delish, and then grew suspicious when she was sent an invoice for a $2,000 computer.

“Hi, I just got scammed so bad, and I need to talk about it,” she says in a video that’s been viewed more than 138,000 times. “I was looking for an extra part-time job for some additional income, and I’m a freelancer on Upwork. So I’m looking on Upwork for some positions, and, to my surprised, I find a position at Delish on Upwork for a proofreader. I love food; I love Delish. Super flexible opportunity, I was super stoked.”

@musicbylara said there were some initially odd things about the job posting and hiring process, but they didn’t ultimately raise any red flags for her.

“And I’m kind of doubtful because why would they be posting this on Upwork?” she says. “But maybe they just need a freelancer for this job. So I applied, and they immediately contacted me for an interview. So they told me to message the person that would be interviewing me on Skype. Again, I’m like this is kind of weird, people don’t really use Skype anymore, do they?”

After the supposed interviewers reached out to her saying that they would be sending her a $2,000 invoice for a company computer that would be followed by a reimbursement check, @musicbylara says she began to get suspicious of the job offer and reached out to the people she thought she had been speaking with at Delish directly via emails listed on the website. As it turns out, Lara says the actual company confirmed the whole thing was a scam.

“Literally the most legit scam I have ever seen, and I was heartbroken when I figured out it was fake,” she says.

In the comments section, Delish said it is aware of the scam.

“So sorry this happened to you. We are aware of this scam and have reported it multiple times with no action from UpWork,” it wrote.

Commenters shared similar experiences of encountering scam job listings, some of which were also found on Upwork.

“I’ve been scammed on Upwork as well and all they do is just shrug they’re shoulders saying ‘Welp, that’s not on us. We’re just a platform that hosts jobs, not the job police,’” a commenter wrote.

“I don’t trust Upwork. I feel like so many of their jobs feel like scams,” another commenter wrote. “I had one that turned out to be legit but they wanted a picture of my bank card (front and back) and a picture of my PayPal settings. Turned out it was the company because I emailed them but still… was like that’s too weird.”

“What did Upwork say?” another asked. “I’ve had a lot of scam offers and ghosting through it. When I report it to them, they don’t respond.”

The Daily Dot has reached out to @musicbylara via Instagram direct message as well as to Delish and Upwork via email regarding this story.

Brooke Sjoberg is a freelance writer for the Daily Dot. She graduated with her Bachelors in Journalism from the University of Texas at Austin in 2020.