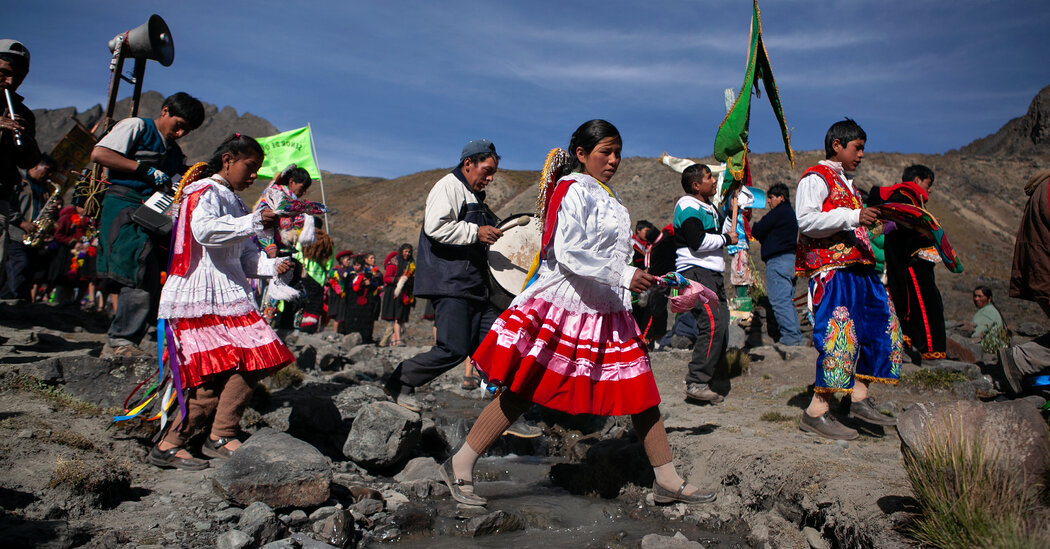 At the onset of the coronavirus pandemic, with travel restrictions in place worldwide, we launched a new series — The World Through a Lens — in which photojournalists help transport you, virtually, to some of our planet’s most beautiful and intriguing places. This week, Danielle Villasana shares a collection of images from southeastern Peru.

Stubbornly unfazed by warnings of “soroche,” or altitude sickness, I swung my legs up onto a donkey and began to ascend the steep trails. After trekking for a few dizzying hours alongside hundreds of others, I approached a glacial basin. The scene began to unfold before us: an immense valley flooded with so many pilgrims that it seemed to be covered in confetti, each tiny speck representing a huddled collection of tents and people.

The altitude sickness began to overtake every inch of my body. Even my eyeballs ached. But, undeterred, I slowly navigated through the throngs of people trying to take in every sight and sound.

Each year in late May or early June, thousands of pilgrims trek for hours on foot and horseback through Peru’s Andean highlands — slowly snaking their way up the mountainous terrain — for the religious celebrations of Qoyllur Rit’i, held some 50 miles east of Cusco, once the capital of the Incan empire.

Practiced annually for hundreds of years, the celebrations mark the start of the harvest season, when the Pleiades, a prominent cluster of stars, return to the night sky in the Southern Hemisphere. The syncretic festival, which is on UNESCO’s Representative List of the Intangible Cultural Heritage of Humanity, interweaves Indigenous and Incan customs with Catholic traditions introduced by Spanish colonizers, who sought to undermine Andean cosmology.

Celebrations were suspended this year because of the coronavirus pandemic, with the route to the valley completely blocked off. But when I attended in 2013, the crowds were remarkably dense.

The festival takes place in the Sinakara Valley, a glacial basin that sits around 16,000 feet above sea level. Celebrants swarm in colorful droves with costumes, enormous flags, instruments and provisions in tow.

The festivities begin with the arrival of a statue of the Lord of Qoyllur Rit’i, transported from the nearby town of Mahuayani, to the valley’s small chapel. For three days, from morning until night, amid the nonstop sounds of drums, flutes, whistles, accordions, cymbals and electric keyboards, the air is filled with billowing clouds of dust kicked up from twirling dancers; it settles on the sequins, neon scarves, ribbons, tassels and feathers that adorn people’s traditional costumes and attire.

Pilgrims here are divided into “nations,” which correspond to their place of origin. Most belong to the Quechua-speaking agricultural regions to the northwest, or to the Aymara-speaking regions to the southeast. The delegation from Paucartambo has been making the pilgrimage for longer than any other.

“It’s important to maintain this tradition, because we have a lot of faith,” said a young Paucartambo pilgrim dressed as an ukuku, a mythical half-man and half-bear creature. Costumed in red, white and black alpaca robes, the ukukus are responsible for ensuring the safety of the pilgrims; they act as intermediaries between the Lord of Qoyllur Rit’i and the people.

Hundreds of ceremonies are held throughout the three-day festival. But the long-awaited main event is carried out by the ukukus in the early morning hours of the last day. Carrying towering crosses and candles, ukukus from each nation ascend the Qullqipunku mountain toward a nearby glacier, regarded as alive and sentient. (The snow-capped mountains circling the valley are also believed to be mountain gods, or Apus, that provide protection.)

According to oral traditions, the ukukus, after scaling the icy slopes, once partook in ritualistic battles that were eventually prohibited by the Catholic Church.

Another tradition was also recently put to rest, this time by Mother Nature.

Up until only a few years ago, ukukus would carve slabs of ice from the glacier, whose melted water is revered as medicinal. Pilgrims would eagerly await the ukukus, backs bent from the weight of the ice, who would place the blocks along the pathway to the temple, to be used as holy water. Sometimes the ice was even transported to Cusco’s main square where, as Qoyllur Rit’i draws to a close, Corpus Christi celebrations kick off with comparable religious zeal.

Many believed that carrying the ice was a penance for sins, and that fulfilling this ritual meant the Apus would offer blessings.

But because much of the glacier has melted, significantly reducing its size, the tradition of carrying chunks of sacred ice down the mountain has been banned.

Climate scientists say that glaciers in the tropical Andes have been reduced by nearly a quarter in the last 40 years. Some scientists predict that such glaciers could disappear entirely by 2070.

These changes have not only affected agricultural practices in the Andes, but also, as witnessed by Qoyllur Rit’i pilgrims, cultural ones, too.

Although the ukukus now carry only wooden crosses back down the mountain, they’re still met with great jubilation — a testament to human resilience in the face of destruction caused by climate change.