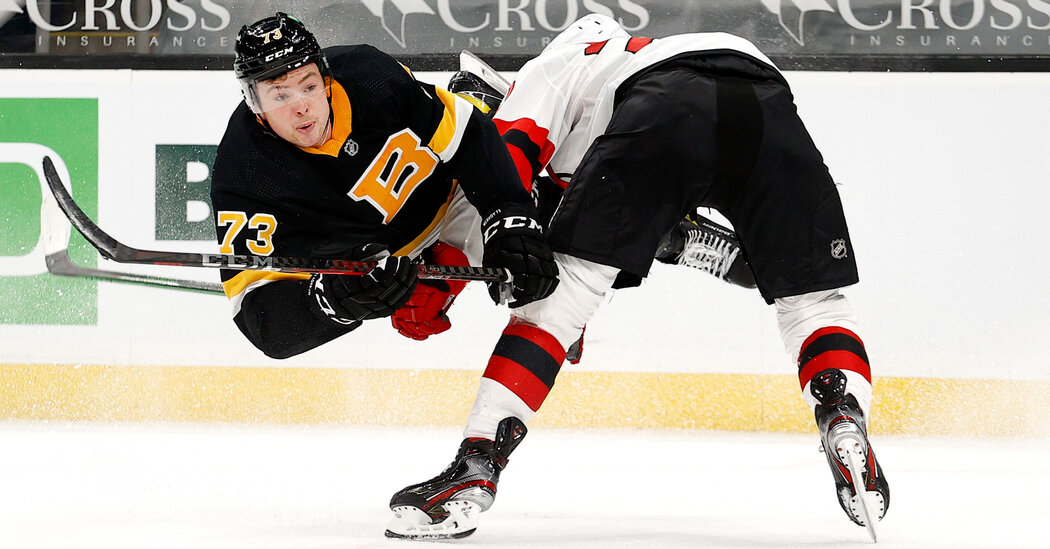 In one short off-season, the Boston Bruins lost Zdeno Chara, their 14-year captain and shutdown defenseman, and Torey Krug, the quarterback of their perennially potent power play.

Retooling the back line of a team with aspirations of winning the Stanley Cup without going outside the organization required a higher level of play from holdover defenders, none more so than Charlie McAvoy.

Though he was barely 23 years old when this season started, McAvoy had already played 238 regular season and playoff games, all with Chara on the roster as his defense partner and mentor. But Chara signed a one-year contract with Washington four days before camp opened and two months after Krug, who led all N.H.L. defensemen in power-play points last year, signed a seven-year contract with St. Louis.

While handling added responsibilities and elevated expectations, McAvoy has delivered. He is third on the team in points and tied for first in assists, and is on track to establish career highs in both categories.

Entering Sunday’s game against the Philadelphia Flyers, the Bruins (10-3-2) sit atop the East Division, their lone regulation losses to the Islanders at the end of road trips and to the Devils on Thursday. The game against Philadelphia is one of the league’s two outdoor games at Lake Tahoe. The first, between Colorado and Vegas, started Saturday afternoon but the final two periods were postponed to midnight Eastern because of “poor ice conditions resulting from extreme sun,” the league said.

Pierre McGuire, an analyst for NBC Sports, has followed McAvoy since his days at Boston University. McAvoy made a quick jump from the N.C.A.A. Tournament to the Stanley Cup playoffs in 2017.

“If you didn’t think he was going to be good, you didn’t know what you were watching,” McGuire said in a phone interview, referring to McAvoy’s college career.

McAvoy already has figured prominently in key moments this year. In Washington on Jan. 30, his aggressive pinch along the boards off a face-off play and subsequent goal-mouth pass to Brad Marchand brought Boston within a goal, then he tied the game with 58 seconds left to help the Bruins salvage a point in a game in which they had trailed 3-0.

In overtime against the Rangers on Feb. 10, he broke up a midair pass with the shaft of his stick as two Rangers converged on the net, and in virtually the same motion banked a pass behind the Rangers’ defense to Marchand, who skated in alone for the game-winner.

As instrumental as Chara was in McAvoy’s development, his departure may have accelerated it. Ever since McAvoy has been in the league, “he’s been an elite puck mover,” Bruins Coach Bruce Cassidy said in a video call. When the Bruins gathered for training camp, Cassidy encouraged McAvoy to shoot more and through 15 games McAvoy has landed 29 on net, the best pace of his career.

“I’ve always been a pass-first guy, but I’m trying to change that to shoot when the play is there,” McAvoy said in a video call. With Chara and Krug gone and Matt Grzelcyk having missed nine of the last 11 games because of injuries, McAvoy’s importance to the Bruins has only grown.

“Whenever you’re asked to have more responsibility and given more opportunity, you want to take it and run with it,” he said.

McAvoy’s impact isn’t limited to offense. With the Bruins leading a first-round series 2-1 against Carolina last year but trailing by a goal in the third period of Game 4, McAvoy lined up Jordan Staal as he was wheeling out of his zone and knocked Staal, four inches taller and 12 pounds heavier, off his feet and out of the game with a clean hit.

“Boy, did that change the tenor of the game,” Cassidy said.

Boston tied the score 14 seconds later, won Game 4 and ended the first-round series in five games. McGuire cited it as an example of McAvoy’s ability to know which of his skills are most needed at any particular moment in a game.

“He can influence a game in a lot of ways,” McGuire said. “With his size, his strength, his skill level and his aggressiveness.”

McAvoy is among a handful of emerging defensemen in the league: the 2020 rookie of the year Cale Makar, 22, of Colorado; Dallas’s Miro Heiskanen, 21; Vancouver’s Quinn Hughes, 21; and the Rangers’ Adam Fox, 23.

But unlike those defensemen, McAvoy is now the veteran on his pairing. His partner this year is Jeremy Lauzon, who is also 23 years old but entered this year having played just 41 N.H.L. games.

“Charlie learned from one of the best,” Cassidy said. “Now the student becomes the teacher, so to speak.”

“But we want don’t want him to try to carry the whole defensive corps,” he said. “Just play your game and support your partner. That’s the ask right now.”

And as McAvoy has demonstrated through his career, whatever is asked, he answers.

“He’s just scratching the surface of how good he can be,” McGuire said.