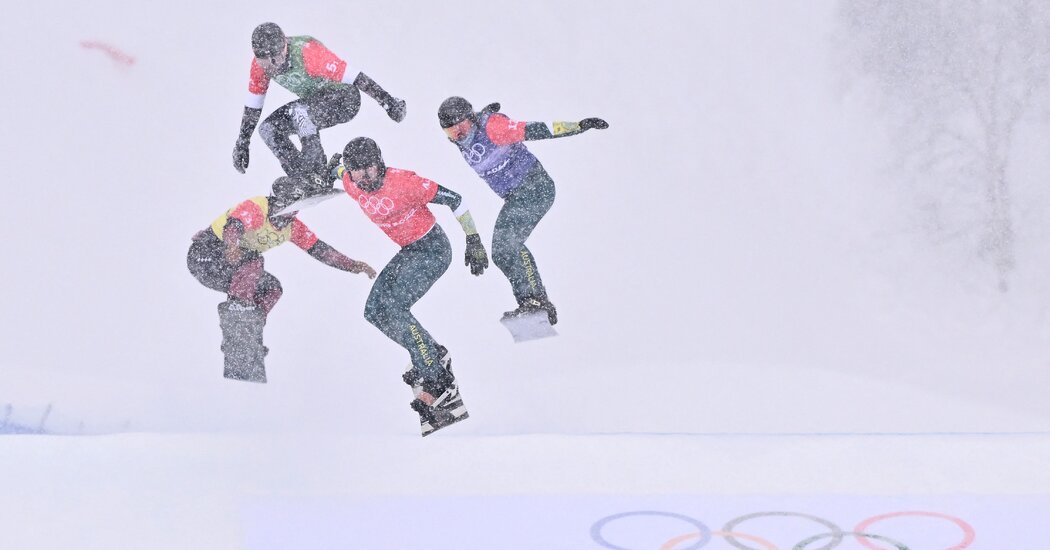 Lindsey Jacobellis had gone 16 years in search of the Olympic gold medal that she squandered back in 2006, when she fell just before the finish line.

Now she has two.

The second came in mixed team snowboard cross, an event that made its Olympic debut on Saturday. The veteran American pairing of Jacobellis, 36, and Nick Baumgartner, 40, showed the younger athletes that they are not being slowed by age.

Jacobellis and Baumgartner, longtime friends and the two leading veterans of the sport for the United States, embraced after Jacobellis crossed the line.

In snowboard cross, four snowboarders at a time race through an obstacle course with a series of jumps, berms and sharp turns. In the team event, one man and one woman per team compete relay style. The men dash down the course first; the women follow, their start times staggered depending on the finishing times of the men.

In the final, the first woman to the finish wins. In earlier rounds, two teams in each heat advance.

Jacobellis and Baumgartner cruised through their quarterfinal and semifinal heats on a snowy day at Genting Snow Park in Zhangjiakou, China. Each navigated the tricky, technical start, built momentum and stayed away from the kinds of collisions and wipeouts that end most medal dreams.

In the final, Baumgartner won the first leg, edging Omar Visintin of Italy by 0.03 seconds. The other men finished within a second of Baumgartner, too, not giving Jacobellis much of a cushion.

Jacobellis quickly fell into third place in a final that featured two Italian teams. She passed one rider on a small jump, then pursued Italy’s Michela Moioli down the course. Jacobellis cut past her on the inside of a tight corner, held the lead and won by 0.2 seconds.

Faye Gulini, 29, and Jake Vedder, 23, a second U.S. team competing in the team event, were eliminated in the quarterfinals.

Jacobellis became the oldest American woman to win an Olympic medal when she took gold in the women’s snowboard cross this week. Her win was a story of quiet perseverance. A premature celebration cost her a sure victory at the 2006 Olympics, when Jacobellis was 20.

Despite being the best racer of her generation, she was haunted by her Olympic performances. In 2010, she swerved off course in a semifinal heat and missed the final; in 2014, she stumbled and missed the final again; and in 2018, she finished fourth.

Baumgartner, a four-time Olympian, hopes his age-defying Olympic run “inspires people to never give up on their dreams,” he wrote on Instagram before competing in Beijing. “You’re never too old to fight for what you want!” He builds a practice track around his house every year to stay in the game.

A member of the U.S. team since 2005, Baumgartner finished fourth in snowboard cross at Pyeongchang in 2018. And despite his elimination from the Olympic event this week, he has made it to two World Cup podiums in the past three months. He began snowboarding when he was 15, but it wasn’t until college that he found snowboard cross, an event he once described as the perfect mix of his two favorite sports: football and snowboarding.

“I’m 40 years old, I’m running out of chances,” Baumgartner said near tears after his elimination from the quarterfinals on Thursday. “This one stings. This one hurts.”

“I ain’t stopping on this, I have to do something better to end with,” he said.