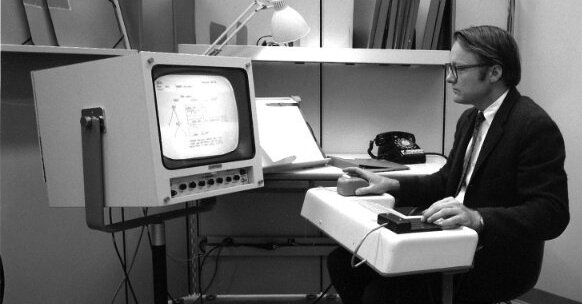 William English, the engineer and researcher who helped build the first computer mouse and, in 1968, orchestrated an elaborate demonstration of the technology that foretold the computers, tablets and smartphones of today, died on July 26 in San Rafael, Calif. He was 91.

His death, at a medical facility, was confirmed by his wife, Roberta English, who said the cause was respiratory failure.

In the late 1950s, after leaving a career in the Navy, Mr. English joined a Northern California research lab called the Stanford Research Institute, or S.R.I. (now known as SRI International). There he met Douglas Engelbart, a fellow engineer who hoped to build a new kind of computer.

At a time when only specialists used computers, entering and retrieving information through punched cards, typewriters and printouts, Mr. Engelbart envisioned a machine that anyone could use simply by manipulating images on a screen. It was a concept that would come to define the information age, but by his own admission Mr. Engelbart had struggled to explain his vision to others.

Mr. English, known to everyone as Bill, was one of the few who understood these ideas and who had the engineering talent, patience and social skills needed to realize them. “He was the guy who made everything happen,” said Bill Duvall, who worked alongside Mr. English during those years. “If you told him something needed to be done, he figured out how to do it.”

Among other things, Mr. Engelbart, who died in 2013 at 88, envisioned a mechanical device that could move a cursor across a screen and perform discrete tasks by selecting particular symbols or images. Mr. English made this a reality, building the first computer mouse and, through a series of tests, showing that it could navigate a screen faster than any other device developed at S.R.I.

Their multifaceted experimental computer was called oNLine System, or NLS, and on Dec. 9, 1968, they unveiled it at an event in San Francisco that became known as “The Mother of All Demos.”

As Mr. Engelbart demonstrated the machine onstage at the Civic Auditorium, a live video appeared on the wall behind him showing the seamless interaction between his mouse and the computer screen. Mr. English directed this elaborate production from the back of the auditorium, relying on cameras and microphones both there and at the lab that housed the computer in Menlo Park, Calif., more than 30 miles away.

This Mother of All Demos — showing early forms of online text editing, video conferencing and “hypertext,” the links now used to navigate web pages on the internet — presaged not only the desktop and laptop computers that rose to the fore in the 1980s and ’90s, but also the smartphones and tablets that would come to suffuse everyday life.

“It showed what a computer interface could — and should — look like,” said Doug Fairbairn, a director of the Computer History Museum in Mountain View, Calif. He worked alongside Mr. English and many other computing pioneers in the 1970s.

William Kirk English was born on Jan. 27, 1929, in Lexington, Ky., the only son of Harry and Caroline (Gray) English. His father was an electrical engineer who managed coal mines in eastern Kentucky and West Virginia; his mother was a homemaker. His father had two other sons, John and Robert, from a previous marriage.

In the early 1940s, after the outbreak of the Second World War, Mr. English left for Arizona to attend a boarding school — what was called a “ranch school,” where he learned to ride horses as well — near Tucson. After returning home, he studied electrical engineering at the University of Kentucky.

His time in the Navy included postings in Northern California and Japan. He then took his research position at the Stanford Research Institute, at first working on a new kind of computer memory — a rotating metal drum the size of a desk that could store as many as three pages of text — before embracing the project that became NLS.

After Mr. Engelbart had envisaged the computer mouse and drawn a rough sketch of it on a notepad, Mr. English built it in the mid-1960s. Housed inside a small pinewood case, the device consisted of two electrical mechanisms, called potentiometers, that tracked the movement of two small wheels as they moved across a desktop. They called it a mouse because of the way the computer’s on-screen cursor, called a CAT, seemed to chase the device’s path.

As they were developing the system, both Mr. English and Mr. Engelbart were part of the government-funded L.S.D. tests conducted by a nearby lab called the International Foundation of Advanced Study. Both took the psychedelic as part of a sweeping effort to determine whether it could “open the mind” and foster creativity.

Though Mr. Engelbart oversaw the NLS project, the 1968 demonstration in San Francisco was led by Mr. English, who brought both engineering and theater skills to the task. In the mid-1950s he had volunteered as a stage manager for a Bay Area theater troupe called The Actor’s Workshop.

For the San Francisco event, he used a video projector the size of a Volkswagen Beetle (borrowed it from a nearby NASA lab) to arrange and project the live images behind Mr. Engelbart as he demonstrated NLS from the stage. He had been able to set up the wireless link that sent video between the Menlo Park computer lab and the auditorium after befriending a telephone company technician.

Three years after the demonstration, Mr. English left S.R.I. and joined a new Xerox lab called the Palo Alto Research Center, or PARC. There he helped adapt many of the NLS ideas for a new machine called the Alto, which became a template for the Apple Macintosh, the first Microsoft Windows personal computers and other internet-connected devices.

“The whole aim was to implement the ideas behind NLS” across a network of personal computers, said Alan Kay, a key researcher behind the Alto.

Mr. English’s first marriage, to Patricia Dickson, ended in divorce. He had met his future second wife, Roberta Mercer, while they were both working at S.R.I. In addition to her, he is survived by two sons from his first marriage, Aaron and John; a stepdaughter, Patricia; and a granddaughter.

This week, when asked if he remembered that Mr. English had arranged the wireless video feed for the Mother of All Demos through a chance meeting with a telephone technician in Silicon Valley, Mr. Kay said he did not.

“But it doesn’t surprise me,” he added. “That sounds like Bill.”