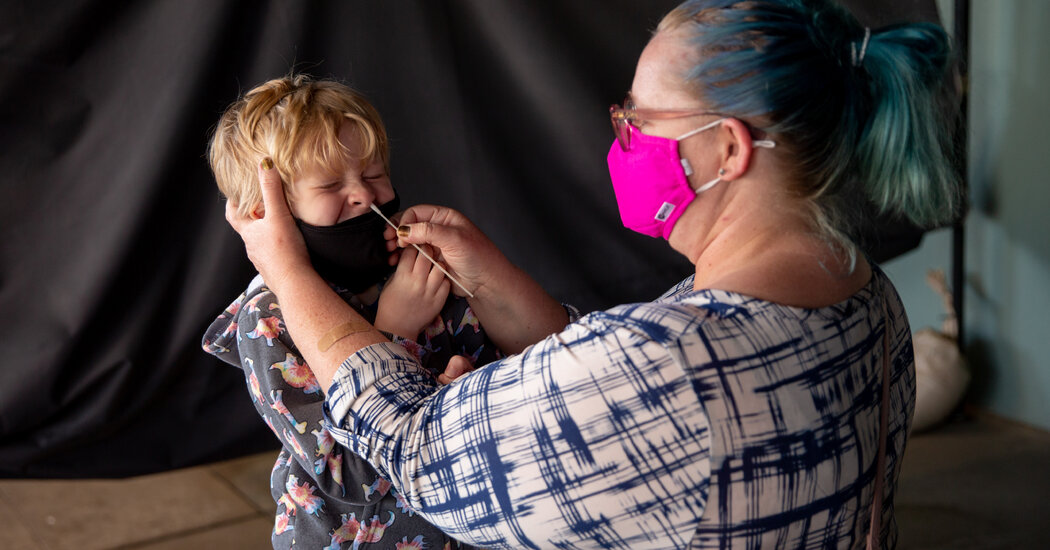 In California, storms over the winter break destroyed a million coronavirus test kits that were meant to help schools screen returning students. In Seattle schools, children waited for hours for virus testing, some in a driving rain. In Florida this month, an attempt to supply tests to teachers in Broward County turned up expired kits. And in Chicago, a labor dispute, partly over testing, kept students out of school for a week.

As millions of American students head back to their desks — Los Angeles, the nation’s second-largest school district, started classes on Tuesday — the Covid-19 testing that was supposed to help keep classrooms open safely is itself being tested. In much of the country, things are not going well.

Slammed by the ultra-contagious Omicron variant, pressured by political factions, baffled by conflicting federal guidance and hamstrung by a national shortage of rapid-test kits, many districts have struggled to ramp up or effectively implement testing programs. In many areas, schools have already had to close in recent weeks because flawed screenings have allowed infected children and teachers to return to class, putting others at risk.

A vast majority of schools nationally have managed so far to continue in-person instruction, and in many areas, transmission in classrooms has been kept lower than in the broader community. But parents’ anxiety and confrontations with teachers’ unions partly over the availability of tests are jeopardizing the Biden administration’s efforts to prevent a return to remote instruction. And even for districts that have working testing programs, high costs are raising questions about their sustainability.

Data from Burbio, a company that audits how schools have operated through the pandemic, shows that more than 5,400 schools have reverted to virtual learning since Jan. 3. The issue, epidemiologists say, is not that testing does not work — particularly in combination with vaccination, face masks and other precautions. Rather, they say, many districts are bungling the execution or failing to muster the resources necessary to test properly.

“A lot of schools are just testing parts of their population once a week, or not using the tests strategically, or confusing surveillance with testing to suppress outbreaks,” said Dr. Michael J. Mina, a former Harvard University epidemiologist and a leading expert on rapid testing who is now the chief science officer for eMed, which authenticates at-home test results.

The result, he said, has been the equivalent of an army going to battle without knowing how to use its weapons or understanding its objectives.

“You can throw all the guns and military personnel you want into a war zone, but if you don’t go in with strategy you’re never going to win,” Dr. Mina said.

Throughout the pandemic, testing — subsidized with billions of dollars in federal funding — has been viewed as a key to keeping children in classrooms and easing the toll of remote learning on emotional health and academic progress. But public health experts say few districts are testing enough, and strategically enough, particularly in the wake of Omicron.

Screenings meant to detect and isolate outbreaks require broad participation, but many districts have resisted requiring students to take part, fearing political backlash. Many schools also screen with P.C.R. testing, which is sensitive but can take days while results are shipped back from processing labs.

Newer test-to-stay programs — which let exposed students remain in class as long as they test negative and don’t have symptoms — also require intensive testing, but rely on rapid antigen tests, which are in short supply nationally as soaring Omicron infections have spiked demand.

The lack of clear federal guidance on rapid tests also has been an issue, forcing “every school system to recreate the wheel,” said Dr. Mina.

The result at many schools, health experts say, has been a hodgepodge of half-measures.

“Asking if school testing works is like asking if a dishwasher works — yes, it works, but only if you load the dishes,” said Meagan Fitzpatrick, an assistant professor at the University of Maryland School of Medicine who specializes in infectious disease modeling.

In Seattle, for instance, schools canceled classes at the start of last week and held pop-up testing events for staff and students, hoping that preventing infectious people from entering schools after the holiday break would limit the spread in classrooms and stave off remote learning. But only about 14,000 of the district’s 50,000 students and 7,800 employees showed up — with about one in 25 testing positive.

By Monday, two schools were closed from staff shortages and infections, and the district was contemplating a return to remote classes. David Giugliani, a parent of two, said he was grateful for the effort schools were making to protect schools and the community, but also anxious about in-person learning and the uncertainty of it all. Among other snafus, he said, he and his children had to endure a four-hour wait, largely indoors, to be tested.

“I’d like greater confidence in what’s going to come next, but who has that?” he said.

In Portland, Ore., where Covid-related staff shortages had shut down two of 12 high schools by the end of the first week back to classes, only 27 percent of students have opted in to regular screenings, said Brenda Martinek, chief of student support services. Vaccinated teachers were not offered school-based tests until last week, when staffers in the district office, from secretaries to people in the I.T. department, were trained to administer P.C.R. tests to employees.

Some Republican-led states have de-emphasized school testing or lagged in distributing stockpiles. In Florida, Gov. Ron DeSantis said last week that unless their parents want it, children “do not need to be doing any crazy mitigation” such as wearing masks or testing. In Broward County, school employees that had taken advantage of a giveaway of 75,000 tests by the school district discovered that some were past their expiration date.

Even in some large urban districts in heavily Democratic parts of the country, where leaders have vowed to keep schools open, effective testing has been hobbled. New York’s schools announced last week that they were doubling participation in their regular surveillance testing. But union officials noted that even at the expanded level, the optional screenings cover only 20 percent of the district’s students, at most.

In Chicago schools, fewer than a third of 150,000 re-entry home-test kits mailed out over the winter break were returned by families, and among those that were returned, a majority of the results were invalid. The district, which serves more than 300,000 students, shut down last week as teachers’ unions demanded more aggressive testing.

And in California, weather disrupted an effort over the winter break by Gov. Gavin Newsom to supply the state’s 1,000-plus districts statewide with enough rapid tests to screen all six million-plus K-12 students for re-entry. Of the 10 million rapid tests sent to districts, state health authorities said, a million were destroyed in the rain.

Still, some districts are leaning in.

In Washington, D.C., which serves some 50,000 students, school officials required negative coronavirus tests for every person returning to campus. On Monday, district officials said they also would provide weekly rapid tests to students too young to be vaccinated and add unspecified “test-to-stay” provisions. Most district schools were in-person this week.

And in Los Angeles, which since 2020 has had one of the nation’s most ambitious testing programs, masked parents with masked children in tow lined up for blocks at school sites for much of last week to undergo another free test, this one required from every student and teacher for re-entry to campus.

“I do the swabs by myself now — it just feels like something is tickling my nose with a feather,” said Matthew Prado, 9, standing in line with his mother and little brother outside a school testing clinic in the working class community of Wilmington near the Port of Los Angeles. “It’s just normal.”

But the Los Angeles program also underscores the resource intensiveness of effective testing. Los Angeles Unified School District was among the first in the nation to initiate widespread school-based testing. Launched by then-superintendent Austin Beutner, the initiative — which encompasses more than 600,000 students and staffers — relies on P.C.R. tests provided for about $12 apiece to the district by a Bay Area start-up, SummerBio. The company, which has devised an automated system to cut costs and speed processing, is contractually obligated to provide overnight results.

As classrooms reopened for the fall earlier this year, the district required all returning students and staff to take a baseline test, then to retest weekly regardless of vaccination status as a condition of in-person instruction. The strategy caught thousands of potential outbreaks and mollified labor concerns over workplace safety.

But even at its relatively low cost — the district’s cost per test is about half what the state negotiated for its tests with another vendor — Los Angeles Unified is spending about $5 million per week on coronavirus testing, said Nick Melvoin, the vice president of the school board.

“We were getting ready in November to pull back on testing because of the cost — then Omicron hit,” Mr. Melvoin said, noting that the arrival of vaccines had significantly reduced the number of cases and the risk of severe illness.

With more than 400,000 tests logged in the Los Angeles schools by Monday, the Omicron challenge, at least for the short term, was apparent: Nearly 15 percent were positive.