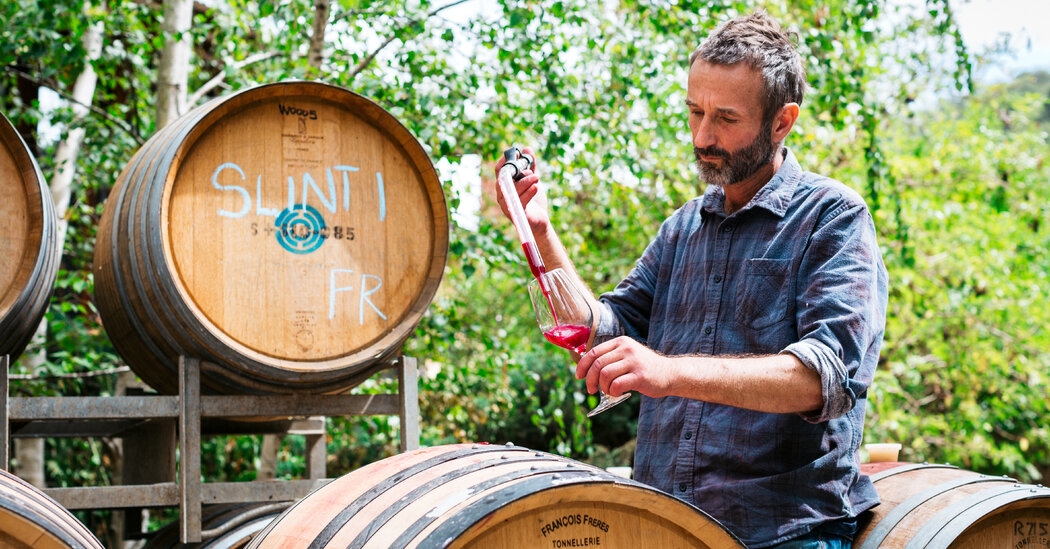 It was a quick trip to Charleston, S.C., after my husband and I were married in coastal North Carolina, a few months before our son’s second birthday. Because Felix was so young and our babysitting options limited, we made the most of one night, eating and drinking wine at more than a few restaurants. The evening ended at the Peninsula Grill with a bottle of wine that was well out of our price range: a Nicolas Joly Savennières.

It was one of those watershed moments in the life of any wine drinker, transforming one’s understanding of what wine can be and do and conjure. These moments are rare and wonderful, and years later it happened to me again with Mr. Ochota.

At the Peninsula Grill, I offered tastes of the Joly wine to those around us, exclaiming, “You have to try this!” Thus began a longstanding, sentimental obsession with Savennières — a small town in the Loire Valley surrounded by chenin blanc vineyards — and particularly the winemaker Nicolas Joly, a pioneer of biodynamic viniculture in France. Mr. Joly’s wines vary by year, but always retain the elements that hooked me in the first place: a touch of honey, the intense minerality of the slatey soil, an edge of nuttiness (in both senses of the word).

Nine years after our wedding, our family took a trip to France, one that we’d been saving for since well before our son was born. Most of it was spent in Paris, but we carved out two days to visit Savennières.

Before our trip, I got an email from a friend of a friend in the wine business. He wondered if we might be interested in spending the day with Mr. Joly and his family.

As we drove up to the Coulée de Serrant vineyard, originally planted in 1130 by Cistercian monks, we were giddily nervous. We knew we were in over our heads, being wine lovers but not experts. What would we talk about with Mr. Joly all day? Would our ignorance show?

We need not have worried. In the soaring library of his chateau, the 70-year-old Mr. Joly questioned us about our lives and told us about his. We talked about politics and religion and winemaking and love. On the grounds, he pointed to cows in a field and declared that he always thought cows were closer to God, because their horns pointed to the heavens.

Lunch with Mr. Joly’s wife and adult son and daughter was slightly more strained. I could tell that the rest of his family had the same question I did: What were we doing there?

In his office, where he chose from a collection of antique pipes, we resumed our flowing conversation as Mr. Joly smoked.

“France is dead,” he declared, gesturing to the ancient building around us. “Look at this. Beautiful, but crumbling. And America is dying.” (He often spoke like an oracle.)

“You should go to Australia,” he said. “There is new life there.”

Three years later, we did.

Our meeting with Mr. Joly taught me something thrilling about wine: Sometimes you can taste the soul of the maker in the bottle. This is not always the case. So much wine is made purely as a product, or as a result of longstanding tradition, or as an act of hubris. But there was a reason we’d connected with that particular wine on the night of our honeymoon, a reason it stirred something deeper than pure enjoyment. It was as mystical and weird and complex as the man who made it.

Which brings me to Taras Ochota.

I moved back to Australia in 2017 not knowing nearly enough about my home country’s wines. There is a deficit of great Australian bottles that make it to the United States, and a glut of terrible ones. Traditional Australian winemaking has long favored hot sun, big reds and fruity, oaky whites — all things I struggle to love.

But a new breed of winemaker is emerging here. Many of them have been seduced by the natural wine movement

Advertisement
. This produces some truly exciting and delicious things, but also many wines that taste like sweaty must.

It wasn’t until I came across Mr. Ochota that I felt the same kind of connection that had drawn me to Mr. Joly, his philosophy and the personality of his wines.

I met Mr. Ochota on a trip to the Adelaide Hills, the mountainous region to the north of Adelaide, while working on an article about South Australia. We met at an old church that he and his friends had converted into a restaurant, Lost in a Forest, with a huge stone pizza oven on what had been the altar. The name is a reference to an early song by the Cure.

We ate very good pizza and drank extremely strong mezcal Bloody Marys, and Mr. Ochota told me about his background as a surfer, musician and winemaker.

He grew up in South Australia drinking the wines made by his Ukranian-born grandfather, and he studied oenology at the University of Adelaide. He played in punk bands, and worked as a winemaker in California, Italy and Sweden, but he always returned to South Australia. Eventually, he and his wife, Amber, started their own label, Ochota Barrels.

He poured me a glass of his Slint chardonnay. “Slint, as in the band?” I asked, not knowing that Mr. Ochota named all his wines after bands or songs. The chardonnay was startling: textured but steely, full of tightly wound energy. It was unlike the Australian chardonnay I’ve come to avoid, but it also wasn’t trying to imitate France or Spain or anywhere else.

We drove up into the hills of the Basket Range to his house, which he shared with his wife, two young children and a gaggle of animals. The lush landscape reminded me of the hollers of West Virginia, the hills intimate and folded in on themselves. The winery is barely more than a shed. On the steep hill above his home, he’d planted riesling vines, and inside he showed me where Mick Jagger played piano when he’d visited late one night.

Mr. Ochota picked grapes much earlier than is traditional in this region. “I felt as though the grapes had something to say, and the overripeness was taking that away from them,” he said. He used grapes from his own vineyards, but also farmed odd stretches of organic and biodynamic vines around the hills and McLaren Vale. In his wines I tasted something thrilling and unique to this part of the world.

Mr. Ochota was a wild man and a gentle soul, and that combination attracted people to him. Eric Asimov, The Times’s wine critic, wrote to me about him:

“He was such a lovely, vital guy, full of life force. It’s tempting to think of Taras as kind of a mad man, given his rock star background and general devil-may-care affect. But what really struck me about him is that, as a winemaker, he was professionally trained and pragmatic. He was most interested in expressing the purity of the vineyards, and would not countenance flaws that might dilute that expression. He also seemed to have his priorities in order. ‘We’re just making a drink, not solving world peace,’ he said.”

It’s spring here in Australia, and Ochota Barrels’ latest wines were released just a few weeks back. I drank the latest vintage of their rosé, Surfer Rosa, on one of Melbourne’s first sunny, warm days. I’ve worn out my love of rosé, growing tired of its easy fruit and often predictable acid. But, like so much of what Mr. Ochota produced, this was different: complex, grassy, herbal. I could taste the thoughtfulness and wit and odd brilliance of the man who made it.

Two days later I woke to the news that Mr. Ochota had died at 49, of complications related to a long-term autoimmune condition.

Wine is just a drink. But for those of us who obsess over it and love it and attach part of our identities to it, it can be more. It can be a way to express the soul of a piece of land, a marriage, a person. I’m not sure there was anyone in Australia who achieved that better than Taras Ochota.