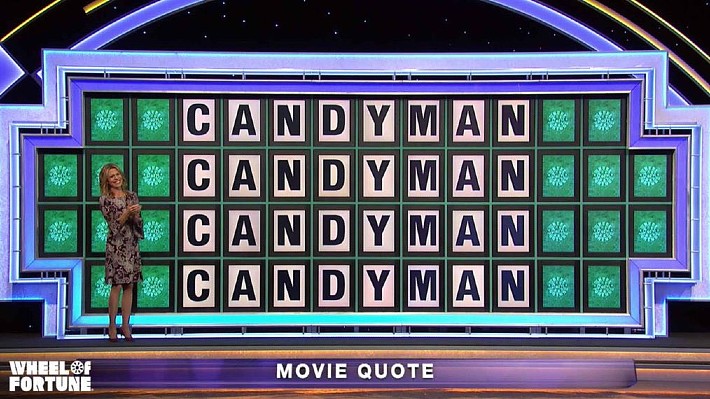 Wheel of Fortune‘s bread and butter is usually in making its viewers feel good about how well they can fill in the blanks on phrases and names, but ahead of Halloween, the show decided to freak out some horror fans by getting very close to summoning a horror legend.

Wednesday’s episode of the long-running program featured a very repetitive puzzle, a rarity on a show that usually makes things tough on its contestants. But the puzzle, labeled with the “Movie Quote” category, was just the word “Candyman” four times in a row.

The horror standout, which was reimagined by Jordan Peele earlier this year, was clearly the reference for Wednesday’s puzzle.

Of course, Candyman only is said to arrive if you say his name five times in a row. So the puzzle stopped just short of actually tempting fate. Wheel of Fortune demands accuracy on saying the puzzles out loud, but it was certainly rife for an accident if a player got a bit overzealous. Which maybe is why so many people reacted to the puzzle on social media.

Wheel of Fortune knew not to put Candyman 5 times in this puzzle. And Black folks not solving this one. We know a set up when we see one. pic.twitter.com/V183cSu9il

Thankfully we’ve seen subsequent episodes air by this point, so it doesn’t seem like anyone actually was haunted on the soundstage. But it was a nice puzzle to mix things up with, and maybe gave a screenwriter or two out there a few good ideas for a game show-themed horror flick.