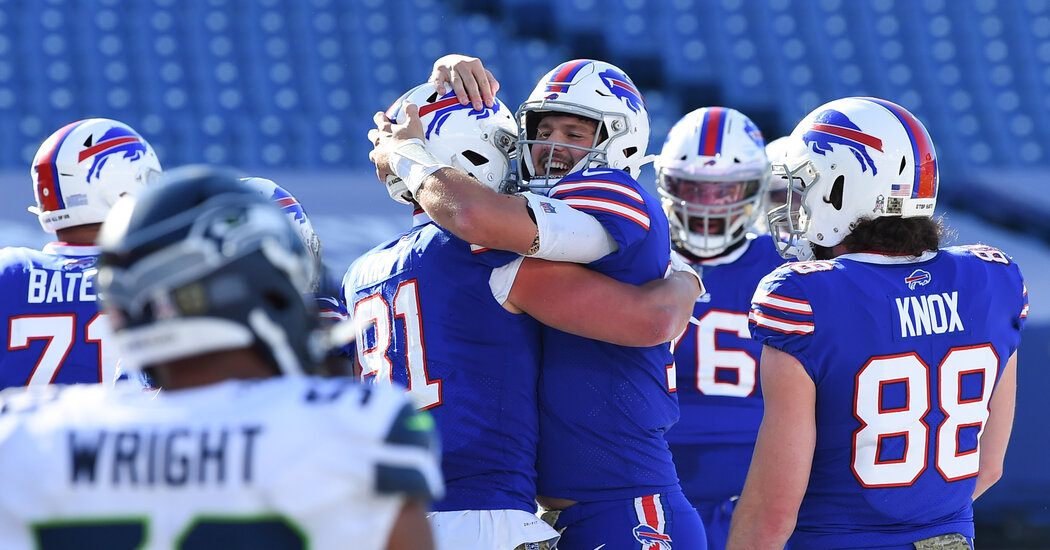 Pittsburgh came back from an early deficit against Dallas to improve to 8-0, Kansas City had to sweat a little against Carolina, Buffalo throttled Seattle and Baltimore’s defense carried the team against Indianapolis. Sunday didn’t have any huge upsets, but there was plenty of excitement.

Here’s what we learned:

One* Sentence About Sunday’s Games

*Except when it takes more.

Bills 44, Seahawks 34 Want an idea of how bad Seattle’s defense has been this season? Despite giving up 44 points — the most the team has allowed in Coach Pete Carroll’s 11 seasons with the team — the Seahawks actually performed better than they typically do in multiple measures. The 420 total yards they gave up were 40 fewer than they were allowing per game coming into the day and the seven sacks they had were a season-high.

Ravens 24, Colts 10 It was a quiet day for Baltimore’s offense, with just 266 total yards, but Lamar Jackson’s 9-yard touchdown run in the fourth quarter put the Ravens over 20 points for a 31st consecutive game. The Ravens broke the previous record of 30 that they had shared with Denver, which had its streak stretch over the 2012, 2013 and 2014 seasons.

Steelers 24, Cowboys 19 Pittsburgh did not score until there was one minute and 10 seconds left in the second quarter, and was trailing until there was just 2:19 left in the game, but the Steelers scraped by with yet another win and Dallas, despite a great deal of improvement from last week, fell to 2-7.

Chiefs 33, Panthers 31 It got way too close for Kansas City’s comfort toward the end of the game, with Carolina’s offense firing on all cylinders thanks to the return of running back Christian McCaffrey who, along with quarterback Teddy Bridgewater and the do-everything receiver Curtis Samuel, makes Carolina a threat to score in bunches for the rest of the season.

Titans 24, Bears 17 After six games, Chicago was 5-1 and it started to look almost inevitable that the Bears would be a playoff team. After all, 83 percent of teams to start that well over the previous 10 seasons qualified for postseason play, and the Bears would benefit from this season’s expanded playoff format. After three consecutive losses, however, Chicago is 5-4 and such a record over the last 10 seasons has led to a playoff appearance just 26.5 percent of the time.

Raiders 31, Chargers 26 Isaiah Johnson should have teammates buying him dinner all week as the Las Vegas cornerback broke up two passes in the end zone in the game’s final five seconds, either of which would have won the game for Los Angeles.

Dolphins 34, Cardinals 31 In a matchup of 2018 finalists for the Heisman Trophy, Arizona’s Kyler Murray had a more exciting game, but Miami’s Tua Tagovailoa walked away with the win. Tagovailoa looked much improved from last week’s start, throwing for 248 yards and two touchdowns that combined with plenty of help from his rapidly ascending team to hold off Murray, who passed for 283 yards and three touchdowns while running for 106 yards and another score.

Vikings 34, Lions 20 It was a hard day for Detroit, as Matthew Stafford was intercepted on consecutive possessions in the third quarter and left the game for concussion evaluation in the fourth while his team’s defense was humiliated by Minnesota’s offense.

Falcons 34, Broncos 27 Atlanta got a solid win at home, and Matt Ryan had one of the prettier 51-yard bombs for a touchdown you’ll ever see, but it’s worth noting that Denver quarterback Drew Lock once against inspired some fourth-quarter magic, leading the team to 21 points a week after putting up 21 in the fourth in a come-from-behind win over the Chargers. If only Lock could play like that in the other three quarters.

Texans 27, Jaguars 25 Houston is a deeply flawed team, but given a chance to exploit Jacksonville’s porous secondary, Deshaun Watson did not disappoint, throwing a 57-yard catch-and-run touchdown to Brandin Cooks on his team’s first possession and a 77-yard score to Will Fuller V in the third quarter.

Giants 23, Footballers 20 Daniel Jones did not commit a turnover in a game for just the second time in his 22-game career and improved to 4-0 against Washington — he’s 1-16 against all other teams in his 21 career starts.

Colin Kaepernick Is Working Out For The Raiders On Wednesday

Dallas Mavericks Save Season With Win Over Golden State