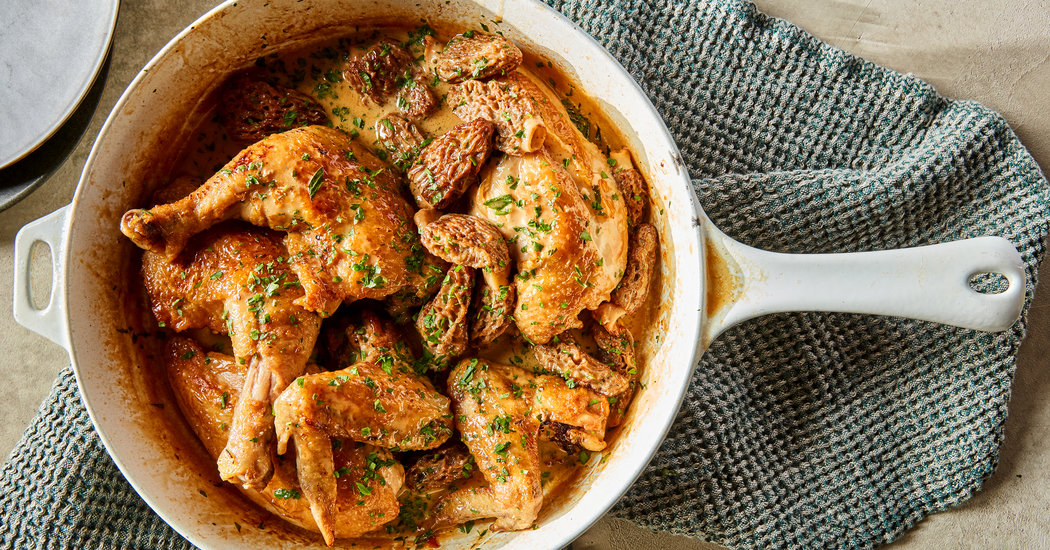 Good morning. I flushed a ruffed grouse out of a snow-covered field in the Maine woods a while back, and the image of it flying — exploding into the sky, then banking toward a stand of aspen — has stuck with me since. You may know the ruffed grouse as a partridge, may have eaten one in the home of a hunter (mild, sweet meat), may even have seen a Meissen-style porcelain depiction sitting on a starched white tablecloth at a fancy dinner party.

Have you ever cooked one? They’re available online if your butcher can’t get them, or if you don’t have a butcher. We have an old recipe for the bird on New York Times Cooking, but I think your best bet is to take this awesome recipe for pan-roasted chicken in cream sauce (above), from the game-mad chef Angie Mar, and use partridge in place of the chicken. It’s a straight swap, though the partridge will cook much more quickly — watch it closely once the skin has browned.

(“This was absolutely fantastic,” one of our subscribers said of the chicken version. “The sauce was beyond divine. I was out of chicken so I used a ham hock and … Just kidding! Followed the recipe exactly and adored the results.”)

Game may not be your game, of course. Yotam Ottolenghi’s new recipe for grilled portobellos with chile sauce, sour cream and corn nuts

Advertisement
could suit instead, a riot of textures and big flavor. Or maybe caramelized shallot pasta? Sopa de fideo, that comforting Mexican classic? If none of those intrigue, there’s swordfish piccata, always and forever.

Now, it’s nothing to do with baby kale or triple-cream Brie, but I want to alert you to “The Trojan Horse Affair,” a Times audio collaboration with Serial Productions, reported by Brian Reed and Hamza Syed. It’s about an investigation into a national panic in Britain that arose after an anonymous letter appeared on the desk of a city councilor in Birmingham, alleging a plot by Islamic extremists to infiltrate the city’s schools. Riveting.

Speaking of extremists, supporters of the Dominican friar Girolamo Savonarola set off the first so-called “bonfire of the vanities” on this day in 1497, burning piles of cosmetics, books and art in the public square of Florence, Italy. Seems like a good day to dive back into Tom Wolfe’s 1990 novel of the same name or to read it for the first time. Those sentences crackle!

Finally, let’s have Debbie Harry and Iggy Pop play us into the kitchen with their 1990 rendition of Cole Porter’s “Well, Did You Evah!” It’s a swellegant, elegant video, for sure. I’ll be back on Wednesday.