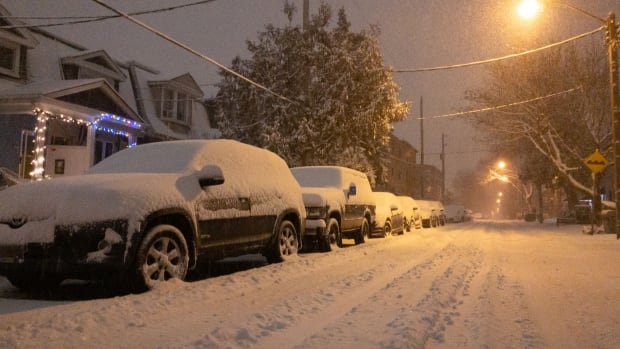 Students in Ontario are expected back in classrooms this morning after a period of remote learning — but after a blast of winter weather, some will be learning remotely for at least another day.

Environment Canada published weather alerts for a broad swath of southern Ontario, from snowfall warnings for the Barrie area to winter storm warnings for Hamilton and Ottawa.

In Toronto, Environment Canada posted a winter storm warning, with a total snowfall of between 25 and 35 centimetres expected.

“Snow, at times heavy, with peak snowfall rates of four to six cm per hour possible this morning, which will significantly reduce visibilities,” an alert posted early Monday morning said.

In Toronto, city officials on Sunday urged people to “expect hazardous conditions and poor visibility,” and to plan accordingly.

The Toronto District School Board said on Twitter on Monday that “all schools will be moving to remote learning” because of the weather conditions.

The Toronto Catholic District School Board made a similar move, saying: “Due to the weather, all school bus transportation has been cancelled & schools are closed for in-person learning today. Staff & students will continue to remain engaged in remote learning at home.”

The city of Hamilton is also under a winter storm warning, prompting Environment Canada to urge people in the Toronto and Hamilton areas to consider postponing non-essential travel until conditions improve.

“Surfaces such as highways, roads, walkways and parking lots may become difficult to navigate due to accumulating snow,” the warnings say.

The Hamilton-Wentworth District School Board announced early Monday that there would be no in-person or remote learning.

ALERT: All remote, eLearning, child care, and in-person learning is cancelled today, Jan 17 due to inclement weather and as a result of cancelled transportation. Buses are not running. All admin buildings are closed. <a href=”https://t.co/0LApqjpAZb”>pic.twitter.com/0LApqjpAZb</a>

For students in the Hamilton-Wentworth Catholic District School Board, in-school classes were called off, but some remote learning continued.

“Transportation is cancelled and HWCDSB schools are closed for in-person learning today, Monday, Jan. 17, due to inclement weather,” the Catholic board in Hamilton said in a tweet. “The elementary virtual school remains open. In-person students can expect to have some asynchronous work posted by 10 a.m.”

In the Halton-Peel area, Environment Canada said early Monday that a snowfall warning is still in effect for the Caledon area.

In the Niagara region, at least one school board was closing classrooms.

Well friends, it’s a SNOW DAY! Schools are closed. This includes remote learning.<br> <br>2022 is off to a strange start. We know lots of you were ready to go to school today, but it’s officially a long weekend, so we really hope you enjoy it! <a href=”https://t.co/tBA0oj6kBU”>pic.twitter.com/tBA0oj6kBU</a>

In Ottawa, Environment Canada forecasted a total snowfall of between 25 and 40 centimetres, with as much as 50 centimetres in some areas.

“Snow, at times heavy, with peak snowfall rates of four to seven cm per hour possible Monday morning, which could significantly reduce visibilities,” the alert published Sunday night for the Ottawa area said.

Schools were to reopen this week

The snowfall in southern Ontario added a wrinkle to the province’s already contentious school reopening plan.

The province shifted to online learning after the winter break, so schools not shuttered by snow will be reopening for the first time in nearly a month.

The Ontario Provincial Police Highway Safety Division reminded drivers to make sure to clean cars completely if they do need to hit the road.

Ontario isn’t the only province feeling the fallout from winter weather. In Quebec, some school boards were closing because of weather conditions.