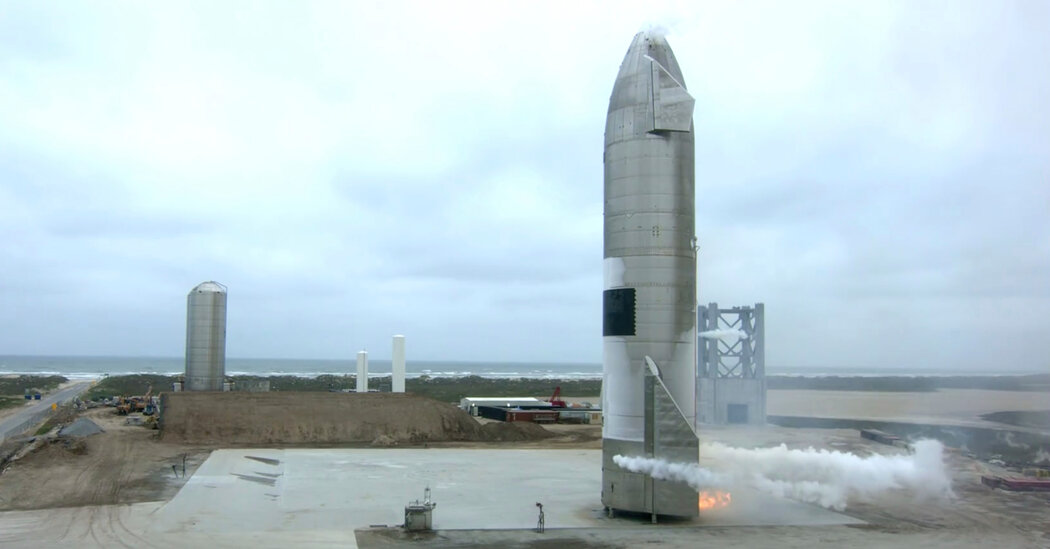 A few weeks ago, NASA awarded a contract to SpaceX for $2.9 billion to use Starship to take astronauts from lunar orbit to the surface of the moon. The contract is part of the Artemis program, and NASA had been expected to choose more than one company to build a moon lander, mirroring the approach the space agency has used for hiring companies to take cargo and now astronauts to the International Space Station.

After the announcement, NASA’s decision was challenged by the two other companies that were competing for the contract: Blue Origin, the private company founded by Jeff Bezos, the chief executive of Amazon; and Dynetics, a defense contractor in Huntsville, Ala. NASA has now instructed SpaceX to halt work on the lunar Starship until the Government Accountability Office makes a decision on the protests. The challenge does not affect SpaceX’s work on the Starship models currently being tested in Texas.

Mr. Musk’s company has become successful in the launch business, and it is now one of the world’s most valuable privately held companies. Its Falcon 9 rockets have become a dominant workhorse for sending satellites into orbit. It routinely transports cargo and astronauts to the International Space Station. In the last month, it has launched four astronauts to the space station for NASA, and later brought home another crew in a nighttime splashdown on Saturday.

However, many are skeptical of Mr. Musk’s assertion that the company is just a few years from sending a Starship to Mars, noting that he has repeatedly set timelines for SpaceX that proved far too optimistic.

In 2019, when he provided an update on the development of Starship, he said that a high-altitude test would occur within months and that orbital flights could occur early in 2020.

Instead, several catastrophic failures happened because of faulty welding. When the propellant tanks stopped rupturing, two of the prototypes made short successful flights last year. Those earlier Starship prototypes resembled spray paint cans with their labels removed, rising nearly 500 feet using a single rocket engine before setting back down at the Texas test site.

Although it has lifted off the ground many times, Starship is a long way from being ready for a trip to orbit. But SpaceX already has its eyes on future tests that will send subsequent Starship prototypes to much greater altitudes. In March, Mr. Musk shared a picture of a prototype of the large booster stage that will be needed for a trip to space. It is over 200 feet tall.