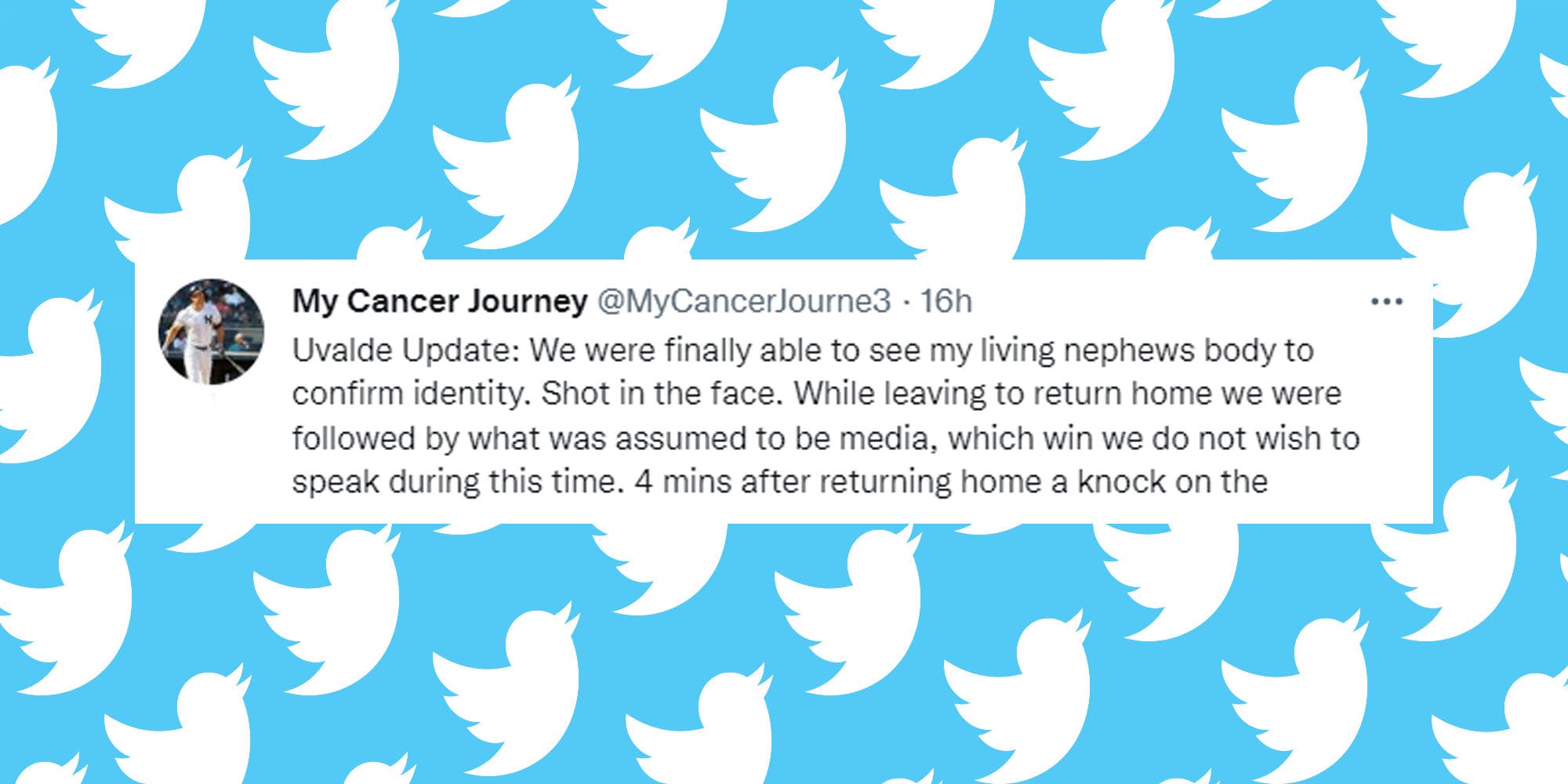 Update 2:18pm CT: In response to numerous inquiries, the Twitter user has since deleted their tweets. The original story appears below.

A Twitter user claiming to be the uncle of a student killed in Uvalde, Texas is fake, according to a number of debunks by Twitter users who found widespread discrepancies and unbelievable claims in the account’s past.

The account, @MyCancerJourne3, tweeted yesterday that he identified his nephew who was killed in the shooting. He then said he was followed home, worried the media was hounding him. But according to the account, it was actually staffers of Texas Gov. Greg Abbott (R) who came to their house and attempted to bribe them to speak out against gun control.

The shocking claim that Abbott would attempt to bribe families of Uvalde victims to stand with him brought about widespread ire from Twitter users, given the lack of urgency on gun control from a number of prominent Texas politicians after the massacre.

The tweet has over 30,000 retweets and over 90,000 likes. It even attracted the attention of Rep. Joaquin Castro (D-Texas), who replied to the tweet offering assistance to the user.

But as soon as the story began to go viral, others called out what appear to be fake stories from the account.

It appears the tale was entirely untrue.

“listen, wilder things have happened but this account loves to claim a dead nephew occurred after a tragedy,” wrote one user

The user has claimed to have received a Purple Heart after he was allegedly a 9/11 first responder (something someone wouldn’t be given a Purple Heart for) and said they did three tours in Iraq and Afghanistan. The account also claimed he was a prisoner of war for 31 days and has a separate nephew who was killed in Washington by a sheriff.

Other Twitter users found his CashApp, which he posted under his viral tweets, and were able to track him down.

Abbott’s staff denied ever reaching out to the man, calling the claims “completely false.” The user, in an interview with the Daily Beast, also claimed his account was hacked and that he has no relatives in Uvalde.

The claim is just one of many false theories and stories that have circulated after the horrific Uvalde, Texas shooting which left 19 children and two adults dead and a community reeling. Local and state politicians have begun to call for an investigation into the shooting and the police response, which has come under scrutiny in recent days.