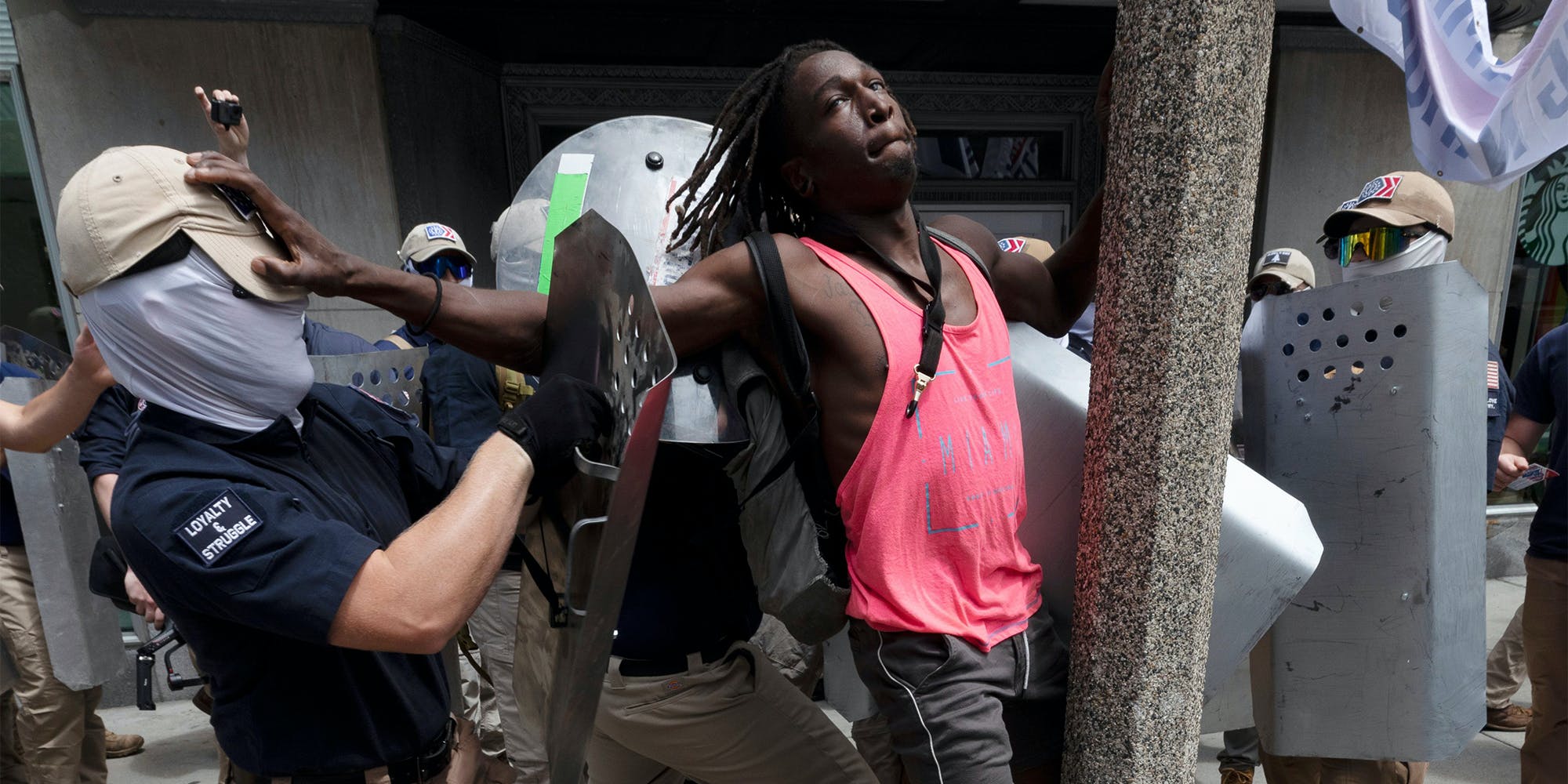 A nonprofit veterans group is pressuring prosecutors to file serious charges against members of the white supremacist group Patriot Front. The veterans’ group, Task Force Butler, has published a report that meticulously explains how members of Patriot Front can be prosecuted for a variety of state and federal crimes.

Patriot Front is a far-right white supremacist group founded after the racist Unite the Right rally in 2017. Though largely known for vandalism and marches, its activities have become increasingly aggressive and veered towards violence. In June, 31 members were arrested outside a Pride event and charged with conspiracy to riot. Authorities say they were armed with shields, helmets, spears, and at least one smoke grenade. The cases are still pending.

Task Force Butler’s report, “Project Blacklisted,” identifies members of the group and details how they can be held accountable for allegedly violating dozens of state and federal statutes in Idaho, Massachusetts, and Pennsylvania.

It specifically focuses on claims that multiple members of Patriot Front committed racist assaults on unarmed Black men in Philadelphia, Pennsylvania and Boston, Massachusetts and references the Pride event arrests in Coeur d’Alene, Idaho. It says that members from at least 28 states participated in these “coordinated attacks.”

“Patriot Front meets the statutory definition of engaging in terrorism as a street gang and criminal racketeering organization; and their activity constitutes conspiracies to commit hate crimes by both state and federal statutory definitions,” Task Force Butler writes in the summary of the report.

It claims that Patriot Front knowingly exploits weaknesses in the law to its benefit, as evidenced by members participating in a march in Boston mere weeks after their arrests in Idaho. It says they know that local prosecutors are more likely to charge them with low-level misdemeanors, which emboldens them to commit potentially criminal acts in other jurisdictions, as they’re unlikely to face felony or federal charges.

Because the group is hierarchical and organized, Task Force Butler believes that members of Patriot Front can be charged with conspiracy in addition to the underlying criminal charge for each act.

“Every single criminal act that a Patriot Front gang member engages in on behalf of the organization is the result of a conspiracy by, with, and through the organization’s strictly hierarchical leadership structure, and should be treated as such by law enforcement.”

The report uses the framework from a successful civil suit over the deadly Unite the Right rally as a template. Some defendants in the case, Sine v. Kessler, were found accountable for criminal conspiracy and race-based harassment or violence for their roles in organizing the rally.

Task Force Butler sent its 238-page report to state and federal prosecutors in an attempt to assist and convince them to file charges against members of Patriot Front. Thus far none have made public statements about the report.

“After years of looking at this, I have been more than convinced that the FBI, state attorneys general, and these local jurisdictions all have more than enough evidence to make moves on this neo-Nazi terrorist gang,” Goldsmith reportedly said.

“We as veterans are tired of watching fascists run around, hurt people, and not be brought to justice. So if someone needs to do the homework to make sure that justice is found, we’re willing to do the homework.”