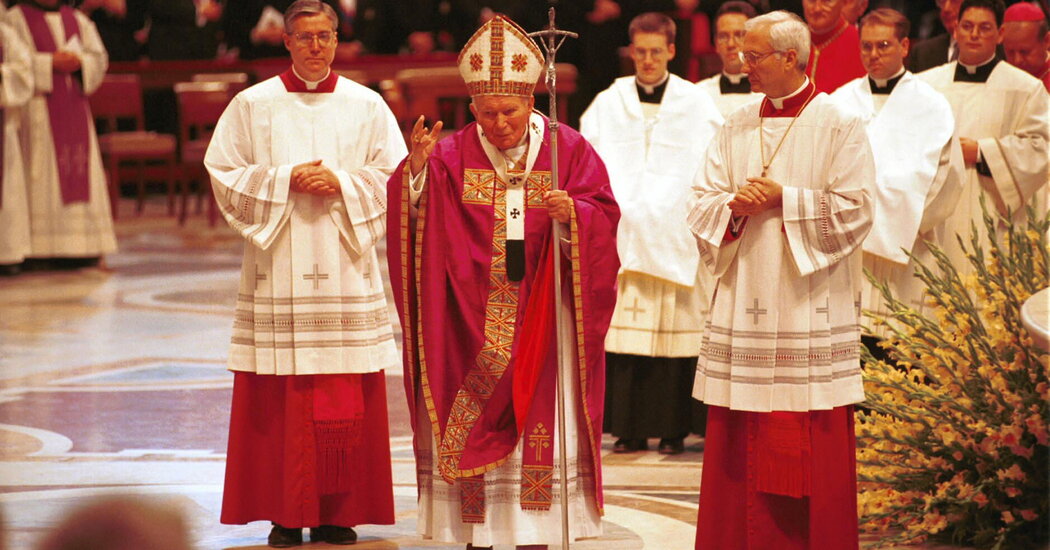 ROME — At the funeral of Pope John Paul II at St. Peter’s Square, banners rose from the sea of mourners reading “Santo Subito,” or “Saint at Once.” He was a giant of the church in the 20th century, spanning the globe, inspiring generations of believers with his youthful magnetism, then aged infirmity, and, as the Polish pope, he helped bring down Communism over his more than 26-year reign.

Days after his death in 2005, cardinals eager to uphold his conservative policies had already begun discussing putting him on a fast track to sainthood while devotees in Rome and beyond clamored for his immediate canonization, drowning out notes of caution from survivors of sexual abuse and historians that John Paul had persistently turned a blind eye to the crimes in his church.

Now, after more than a decade of doubts, his reputation has fallen under its darkest cloud yet, after the very Vatican that rushed to canonize him released an extraordinary report this week that laid at the saint’s feet the blame for the advancement of the disgraced former prelate Theodore E. McCarrick.

The investigation, commissioned by Pope Francis, who canonized John Paul in 2014, revealed how John Paul chose not to believe longstanding accusations of sexual abuse against Mr. McCarrick, including pedophilia, allowing him to climb the hierarchy’s ladder.

The findings detailed decades of bureaucratic obfuscation and lack of accountability by a host of top prelates and threatened to sully the white robes of three popes. But most of all, critics say, it provides searing proof that the church moved with reckless speed to canonize John Paul and now it is caught in its own wreckage.

“He was canonized too fast,” said Kathleen Cummings, author of “A Saint of Our Own” and the head of a center on U.S. Catholicism at the University of Notre Dame. She said that given the “really damning evidence,” in the report, had the church waited at least five years, and not mere days, to begin the canonization process “it would probably not begin for John Paul II because of his complicity in the clergy sex abuse scandal.”

A reversal of the canonization, which historians struggle to recall ever happening, is implausible. Some historians say the McCarrick report is more likely to put back some brakes on a process that John Paul II himself sped up. But the report may complicate the canonization chances of others at the top of the church hierarchy during the late 20th century and early 21st century, when the scourge of sex abuse exploded in the church.

The Vatican report shows that Pope Benedict XVI told Mr. McCarrick to keep a low profile when more allegations of abuse emerged in 2005. Pope Francis, despite hearing rumors of the abuse from his top lieutenants, trusted that his predecessors had properly vetted the case and left it alone, the report found.

Francis has acknowledged his own failures in believing bishops over victims. He removed Mr. McCarrick from the priesthood and has in recent years instituted new church policies to increase accountability.

Many church experts consider those new rules corrections to the abuses and almost willful ignorance of church leaders that occurred under John Paul II.

John Paul II’s defenders say the report only demonstrated that Mr. McCarrick deceived the pope, as he did many others over his half-century rise to the highest ranks of the Catholic Church, and that it has no bearing on the heroic Christian virtue that made the pontiff a saint.

John Paul had been “cynically deceived” by Mr. McCarrick and other American bishops, Stanislaw Gadecki, the head of the Polish bishops conference said in a statement.

“Saints make errors of judgment, this was clearly an error of judgment,” said George Weigel, a biographer of Pope John Paul II and an official witness during his beatification process. “McCarrick was a pathological liar. And pathological liars fool people including saints.”

Mr. Weigel said that if perfection were a prerequisite for sainthood, St. Peter himself would not have made the cut. Indeed, infallibility, which is sometimes attributed to popes, is not a necessary saintly attribute, and history is full of saints who were not exactly saints during their lifetimes.

There has been a satanic priest, prostitutes, thieves and much else on the road to redemption and sainthood. In 1969, Pope Paul VI removed 93 saints from the church’s universal liturgical calendar, but mostly because they might not have existed, such as St. Christopher, who carried on his shoulders an infant who with each step grew heavier with the weight of the world.

But much is known about John Paul II, and some critics are arguing that it is enough cause not to celebrate him.

Citing John Paul’s “calamitous, callous decision-making,” which it said put children around the world at risk, an editorial Friday in the National Catholic Reporter urged American bishops meeting next week for their annual conference to “discuss requesting that the Vatican formally suppress John Paul’s cult,” or cease celebrating him. “Abuse victims deserve no less.”

Advertisement
. John Paul knocked down the criteria for beatification from two miracles to one, and did the same for canonization. In 1983, he reduced the amount of time required between a person’s death and the start of their canonization process to five years from 50.
Advertisement
Advertisement

He produced more than 480 saints, and put enough into the pipeline that Benedict XVI was able to canonize scores more. Pope Francis has followed suit, but has chosen to canonize people closer to his more pastoral, and less doctrinaire, vision of the church, such as Pope Paul VI and the martyred Salvadoran Archbishop Óscar Romero.

All three of the popes embraced the canonization process as a tool to fortify the faithful with the notion that saints are still among us, but also as mission statements for who merits emulation. Given the ideological divisions in the church, that approach puts a premium on speed.

“A process normally begins after five years of the death of the Servant of God and not later than 30 years after his death,” the Rev. Pascual Cebollada, the postulator, or person who presents a case for canonization, for the Jesuit order, explained. “For the last condition there are, of course, many exceptions that must be justified. For the first,” he added, “there have been less exceptions.”

John Paul was one of them. Benedict XVI waived the five-year requirement, allowing his canonization case to begin only days after his death. Even before the McCarrick report’s release on Tuesday, there was a growing sense that might have been a mistake.

In May, reporters asked Msgr. Slawomir Oder, the promoter of the cause for John Paul’s sainthood, whether it would have been wiser to hold off on the canonization. Already by that time, a cloud had grown over John Paul’s relationship with Mr. McCarrick and his close ties to the Rev. Marcial Maciel Degollado, the Mexican founder of the wealthy and powerful religious order Legionaries of Christ, who was later found to have fathered several children and been a serial abuser.

“All questions were faced, even the ones you are talking about” concerning abuse, Monsignor Oder said. He added that “John Paul II did not cover up any pedophile.”

But Monsignor Oder, who did not return a request for comment after the report’s publication, also said at the time that the Vatican did not grant direct access to the archives to those investigating the case for John Paul’s canonization, and that the Secretariat of State researched their questions and provided answers.

Archbishop Carlo Maria Viganò, a former official in the Secretariat of State who became the Vatican’s ambassador to the United States, in part prompted the report by publishing a remarkable letter in 2018 that accused Pope Francis of having covered up Mr. McCarrick’s abuse.

To shield John Paul II, who was actually in power at the time of Mr. McCarrick’s promotions, Archbishop Viganò argued that the ailing pontiff was too sick with Parkinson’s in 2000 to be held accountable.

But the Vatican investigation, which Archbishop Viganò said did not interview him, says that John Paul was of sound mind when he personally made the decision to reject the accusations and appoint Mr. McCarrick.

“The record unequivocally shows that Pope John Paul II made the decision personally,” the report says, and quotes the testimony of the former prefect of the papal household, James Harvey, saying John Paul was “fully capable to make all of his own decisions in 2000.”

The more frequent defense of John Paul, expressed also in the report, is that his experience facing Communism in Poland led him to believe that false accusations against priests and bishops were a political weapon against the faith.

But the reports give a rare glimpse at other, less noble, factors that led the pope to believe Mr. McCarrick, namely that the Vatican operated like an old boys network where bishops always got the benefit of the doubt.

John Paul first met Mr. McCarrick in 1976. Mr. McCarrick, the report says, “was on a fishing trip in the Bahamas with teenagers from some of the Catholic families” when a telegram told him to come back immediately to help translate for Pope John Paul II, then known as Karol Jozef Wojtyla, a rising star in the church. Mr. McCarrick joked that Cardinal Wojtyła had ruined his vacation and they struck up a friendship.

A quarter of a century later, Mr. McCarrick urged John Paul in a letter not to believe the accusations against him.

Pope John Paul II became “convinced of the truth” of McCarrick’s denial, the report notes, adding that Stanislaw Dziwisz, now a Cardinal, recalled that Pope John Paul II also believed it would be “useful to nominate McCarrick to Washington because he has a good relationship with the White House.”

Those events, as well as others in the report, have led some historians to suggest that the church redirect its canonization energies away from the top of the hierarchy.

“You are pope,” Professor Cummings said. “That should be good enough.”