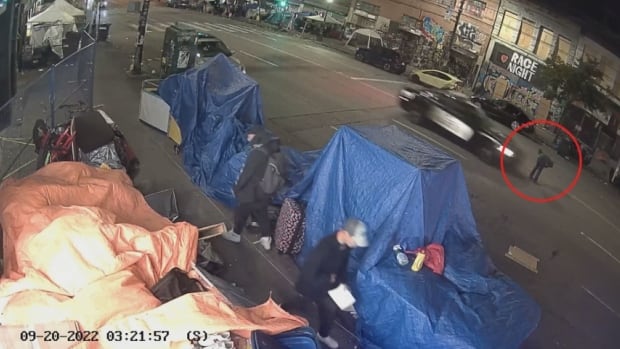 WARNING: This story contains a portion of a video showing the moments before a man is struck in Vancouver’s Downtown Eastside, which some viewers may find disturbing.

B.C.’s police watchdog is investigating after a police car struck a pedestrian in Vancouver’s Downtown Eastside, leaving him with serious injuries.

The Independent Investigations Office of B.C. (IIO), the province’s civilian-led police oversight agency, says a Vancouver police vehicle struck a male pedestrian in the 100 block of East Hastings Street on Tuesday at around 3:20 a.m.

The man was transported to the hospital with serious injuries. The IIO said Wednesday afternoon that the man is still alive.

Footage from the scene shows a man standing still in the middle of an empty street when a cruiser hits him.

An investigation is underway after a Vancouver police cruiser struck a pedestrian on East Hastings Street on the morning of Sept. 20, 2022.

“We trust this investigation will shed light [on] what factors led to the collision, including the reason why the pedestrian was standing motionless in the middle of the road, why the officers did not see the person, the speed of the police vehicle, and other contributing factors,” the statement said.

The Downtown Eastside has long been dangerous for pedestrians, but the fact that the collision involved a police car was troubling to community advocate Dave Hamm with the Vancouver Area Network of Drug Users.

“Police are supposed to be vigilant and aware of what’s going on in the neighbourhood,” Hamm told CBC’s On The Coast.

The pedestrian was wearing dark clothes and standing stationary on the street, but police should be more aware of their surroundings, he says.

“For them to be involved in this incident, it’s it’s kind of appalling and kind of worrisome,” he said.

Hamm believes the car may have been travelling too fast. More than a decade ago, speed limits along a stretch of the DTES were reduced to 30 km/h, following a study prepared for the City of Vancouver.

He says there needs to be better enforcement of traffic rules, especially with so many police already in the neighbourhood.

One of most dangerous intersections in B.C.

The Downtown Eastside is home to some of the most dangerous intersections in the province for pedestrians, according to data from the Insurance Corp. of British Columbia (ICBC), B.C.’s public auto insurance provider.

The most dangerous intersection is East Hastings and Main Streets, just blocks from the location of Tuesday’s collision.

The neighbourhood is a densely packed area with arterial routes into downtown Vancouver, where streets are shared by commuting and commercial drivers, as well as unpredictable pedestrian behaviour in a community experiencing high rates of addiction and mental illness.

The IIO says video footage is among the evidence collected so far. Anyone with footage or information related to the collision is asked to contact IIO at 1-855-446-8477.