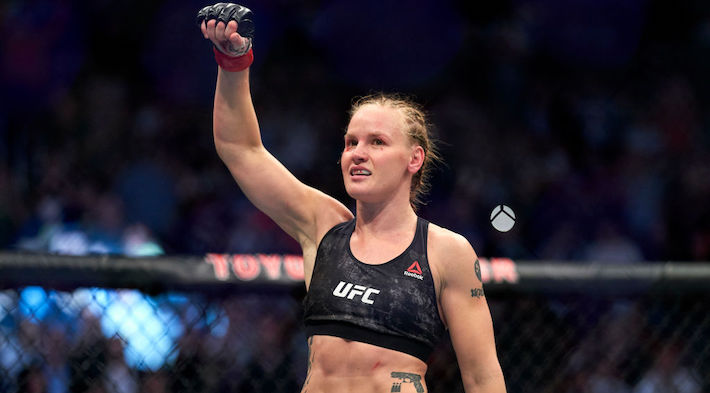 Shevchenko opened the first round strong, attacking Maia out of the gate before taking her to the ground. Maia maintained guard from the bottom, holding Shevchenko close, but really not making any progress from underneath for the final four minutes or so of the first.

About 15 seconds into the second and Shevchenko yet again took Maia to the ground, but the challenger was able to explode back to her feet and maintain control in the clinch against the cage. Maia reversed the takedown attempt from Shevchenko, landing on top on the ground and controlling her position flush against the cage with a body lock. Shevchenko nearly escaped with a triangle choke, but Maia slipped her head out in the last moment before closing out the round.

Shevchenko landed a few more heavy shots early in the third, but Maia was again able to control the champ against the Octagon wall. Back in the center of the mat, Shevchenko started to let her shots fly, landing a head kick and unloading a few combinations. She stunned Maia with a huge left hand, caught her around the waist and took her to the ground, where she held side control. Maia utilized the underhook and made her way to her feet, again pushing the champ back against the cage. Shevchenko succeeded into yet another key takedown as the round expired.

In the fourth, Shevchenko connected on another huge straight left, but Maia stayed in to exchange. Shevchenko followed her left hand into the body lock, and again, scored points with a big takedown.

Maia opened the final round needing a finish to overcome Shevchenko’s likely two-round lead and immediately went for a takedown. Shevechenko fought her off and continued to work with her back against the cage. The champ and challenger traded shots for the final minutes of the round, sending the bout to the judges and keeping the belt with Shevchenko.

Who knows what’s next for Shevchenko, but it shouldn’t be ruled out for a potential return bout with the bantamweight and featherweight champion Amanda Nunes.

Maia earned a title shot after submitting Joanne Calderwood in August. She came into Saturday night’s bout with Shevchenko a +2000 underdog.

Is Euro 2022 the Payoff for England’s Women’s Soccer Play?