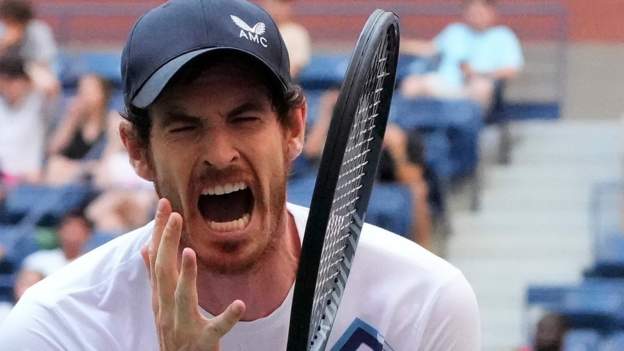 Andy Murray produced his finest display in four injury-disrupted years but fell agonisingly short of beating Greek world number three Stefanos Tsitsipas in a thrilling start to the US Open.

The British former world number one played in a manner reminiscent of his best as he led by two sets to one.

Dan Evans is the only Briton through after defeats for Heather Watson, Harriet Dart and Cameron Norrie.

Johanna Konta withdrew from her first-round match with a thigh injury, meaning teenager Emma Raducanu and Katie Boulter – who both play on Tuesday – are the nation’s last remaining hopes in the women’s singles.

Murray, like so often in the past, was the British player who stole most of the attention on the opening day of the final Grand Slam of the 2021 season – even in defeat.

Now ranked 112th in the world, the Scot was aiming for his biggest win by ranking since his career was derailed by a serious hip injury that left him facing retirement.

Fired up throughout and relishing the magnitude of the occasion, 34-year-old Murray moved freely and hurt Tsitsipas with his quality from all over the court.

A seismic shock beckoned before 23-year-old Tsitsipas – one of the favourites for the men’s singles title – maintained his focus and bided his time to win in four hours and 49 minutes.

“It did not come easy to turn the match around, I had to make a lot of sacrifices,” Tsitsipas said.

After being irritated by the Greek’s eight-minute bathroom break before the deciding set, Murray exchanged a terse handshake with his opponent before continuing to loudly chunter “it’s a joke” while he gathered his belongings.

Even the affectionate and rousing reception which accompanied the 2012 champion off the court could not hide his annoyance.

Murray reminds us why he will never give up

Defying the odds is something Murray has managed to do on several occasions in recent years, but beating an opponent of Tsitsipas’ standing over five sets at a Grand Slam would have been a new benchmark.

Niggling injuries since major hip surgery have continued to hamper his progress and, having played just 12 matches this year going into the US Open, doubts remained about the Scot’s chances of ever competing again with the world’s very best.

While Murray arrived in New York speaking positively about his physical state, he said it was his game that needed to be “in a better place”.

Against Tsitsipas, it certainly was. And at a level where it has rarely been – if at all – since Murray first developed the hip problem at the 2017 French Open.

Playing with freedom of movement and plenty of power, Murray’s quality drew numerous errors from Tsitsipas as he dominated the opening set and then threatened to take a two-set lead.

A deft lob from Murray – a trademark backhand flick reminiscent of the one with which he clinched victory for Great Britain in the 2015 Davis Cup final – put him 5-3 ahead in the second-set tie-break, before a slip on a patch of his own sweat may have bizarrely contributed to him not taking a two-set lead.

Soaked from head to toe in the humid New York conditions, Murray became irritated by his sodden footwear and, after seeing two set points slip away, produced a double fault that helped Tsitsipas level.

Strangely, Murray did not have another pair of trainers with him – meaning he even tried to dry his drenched ones with the air conditioning unit next to his chair.

A two-set lead might have been too greater deficit for Tsitsipas to overturn, although Murray did lead again after regaining his focus as temperatures dropped.

After so few matches in 2021, his level understandably dropped at the start of the fourth as Tsitsipas raced 5-0 ahead before ensuring the match would go into a decider.

More drama came when Tsitsipas spent almost eight minutes off the court before the fifth set, leaving Murray furious and immediately a break down from which he could not recover.

“It’s never taken me that long to go to the bathroom ever,” Murray complained to US Open match supervisor Gerry Armstrong.

The 31-year-old was the first British player on court and ensured he started the nation’s singles challenge on a positive note.

After missing the Olympics because he contracted Covid-19, Evans had lost four of his five matches since Wimbledon and looked to be waning physically as Monteiro levelled at one set all.

During the second set Evans needed ice packs and then also had treatment on his foot after winning the third set.

Former British number one Tim Henman, working at Flushing Meadows as a television commentator, described playing in the heat and humidity as “brutal”.

But Evans dug deep physically and raced to 4-0 up in the fourth set before completing victory.

The Briton will play American world number 64 Marcos Giron in the second round.

Watson and Dart go out

Dart, 25, played excellently in the first set but trailed by a break in the second set when she had to go off court for further treatment on what appeared to be a left leg injury.

After a long delay, she was unable to regain the upper hand against former world number four Garcia and missed out on a place in the second round for the first time.

Norrie had reached the third round in the past four Grand Slams but the 26th seed also lost to cap a largely miserable day for the British contingent.