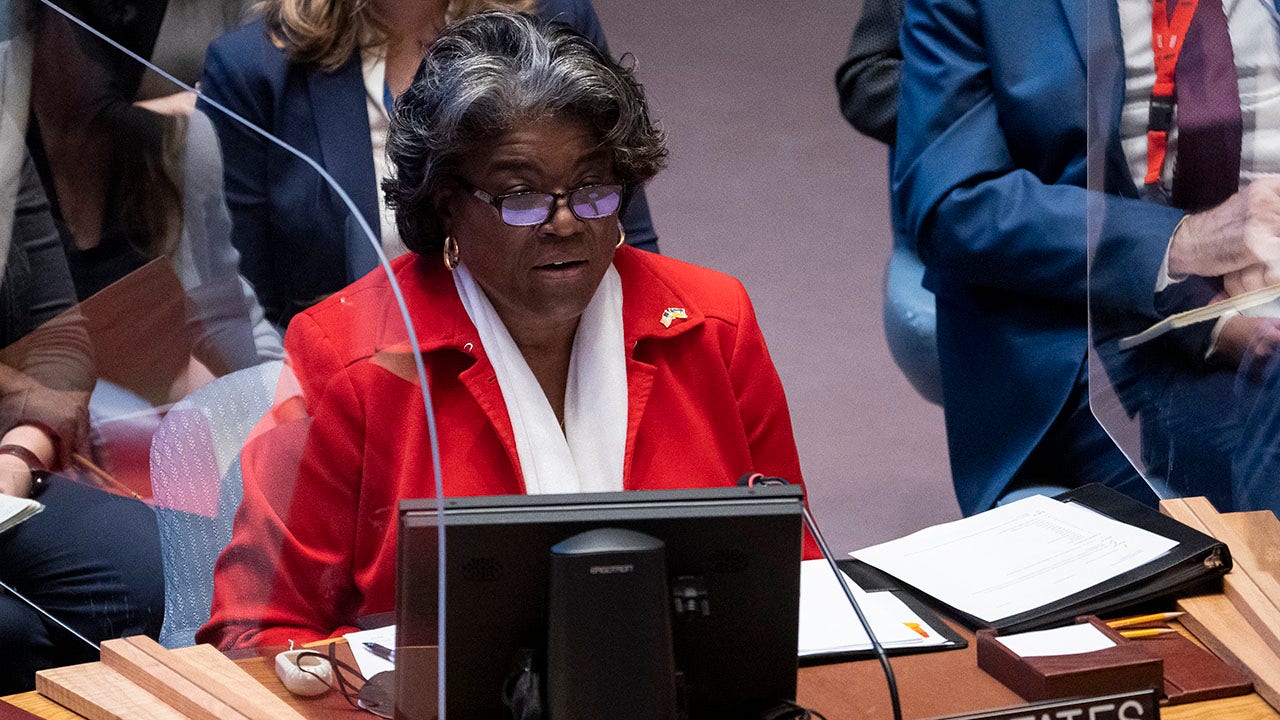 The U.S. ambassador to the United Nations highlighted Tuesday what she deemed as “credible reports” about Russian forces abducting tens of thousands of Ukrainian civilians, confiscating passports and interrogating people in so-called “filtration camps” and then forcibly relocating them to Russia.

The remarks from U.S. Ambassador to the United Nations Linda Thomas-Greenfield came after Ukrainian President Volodymyr Zelenskyy, speaking remotely from Ukraine, addressed the U.N. Security Council. He called for Russian troops to be brought up on war crime charges for atrocities uncovered in Bucha and around Kyiv before a tribunal similar to the one set up at Nuremberg after World War II

“We’ve all seen the gruesome photos, lifeless bodies lying in the streets, apparently summarily executed, their hands tied behind their backs,” Thomas-Greenfield said, referring to images surfacing from the Bucha massacre after Russian forces pulled back from the capital region in recent days.

“As we work to independently confirm the events depicted in these images, I would remind this council that based on the currently available information, the United States has assessed that members of Russia’s forces have committed war crimes in Ukraine,” the ambassador declared.

Recognizing how Zelenskyy has claimed children were being abducted by Russian troops, Thomas-Greenfield also acknowledged how Ukrainian mayors, doctors, religious leaders, journalists and “all who dared defy” Russia’s aggression” have too been kidnapped since the onset of the war on Feb. 24.

“Some of them, according to credible reports, including by the Mariupol City Council, have been taken to so-called filtration camps, where Russian forces are reportedly making tens of thousands of Ukrainian citizens relocate to Russia,” the ambassador said. “Reports indicate that Russian federal security agents are confiscating passports and IDs, taking away cellphones and separating families from one another.”

“I do not need to spell out what these so-called filtration camps are reminiscent of. It’s chilling, and we cannot look away,” she said, appearing to reference Nazi-era concentration camps without evoking the regime’s name. “Every day we see more and more how little Russia respects human rights. And that is why I announced yesterday that the United States, in coordination with Ukraine and many other U.N. member states, will seek Russia’s suspension from the U.N. Human Rights Council.”

Last week, Lyudmyla Denisova, Ukraine’s ombudsperson, claimed that 402,000 people, including 84,000 children, has been relocated against their will to Russia. The Kremlin gave a near exact count of people but claimed that those individuals from the badly bombarded Mariupol and Moscow-allegiant breakaway regions of eastern Ukraine elected to go to Russia to escape the fighting, according to Time

Her remarks echoed what U.S. Secretary of State Antony Blinken said Tuesday about how Russia is running a “deliberate campaign to kill, to torture, to rape, to commit atrocities.”

Zelenskyy, who previously said more than 300 people were tortured and killed in Bucha alone, spelled out Tuesday how “civilians were crushed by tanks while sitting in their cars in the middle of the road,” “women were raped and killed in front of their children,” and equated Russian aggressors to “terrorists” occupying other territories for cutting out the tongues of Ukrainian civilians who opposed them.

On Monday, Ukrainian Deputy Prime Minister Iryna Vereshchuk said the mayor of Motyzhyn, a village outside of Kyiv, Olga Sukhenko, was killed by Russian captors alongside her husband and son. Their bodies were reportedly found in a shallow grave in a forest near homes used as makeshift Russian barracks. Vereshchuk said 11 other Ukrainian mayors and community heads are in Russian captivity.

Ukrainian MP Lesia Vasylenko on Tuesday highlighted how the United Nations declared that Ukraine is the most mine-infested country in the world as over a million people live around land rigged with explosives. Reports said Russian soldiers had rigged at least some of the bodies of Ukrainian civilians they killed with explosives to evoke more tragedy as people recover the dead from shallow graves.

Thomas-Greenfield, who returned Monday from a trip visiting Ukrainian refugees in Moldova and Romania, shared three stories of the more than 10 million people – six million who’ve been internally displaced, and four million who’ve fled Ukraine – during the conflict spanning for over 40 days.

The ambassador shared the story of one young woman who fled with her 6-year-old brother who has autism and is sick with cancer, remarking how “Russia’s war has interrupted the care her brother desperately needs.” Another woman, Thomas-Greenfield said, fled with her 8-year-old child from Odessa, leaving behind the child’s father, who told them shelling later struck next to their apartment. A third woman told the ambassador she loved to travel but never thought her next trip would be to “flee for her life,” breaking down in tears as she wondered if she would be able to return home to Kyiv.

The U.S. recently announced another $1 billion in new funding toward humanitarian assistance as neighboring countries, including Moldova, Romania, Poland, Slovakia and Hungary, “are bearing the brunt of Europe’s most significant refugee crisis since the Second World War,” the ambassador said. The U.S. has committed to taking in up to 100,000 Ukrainian refugees and others displaced by Russia’s war.