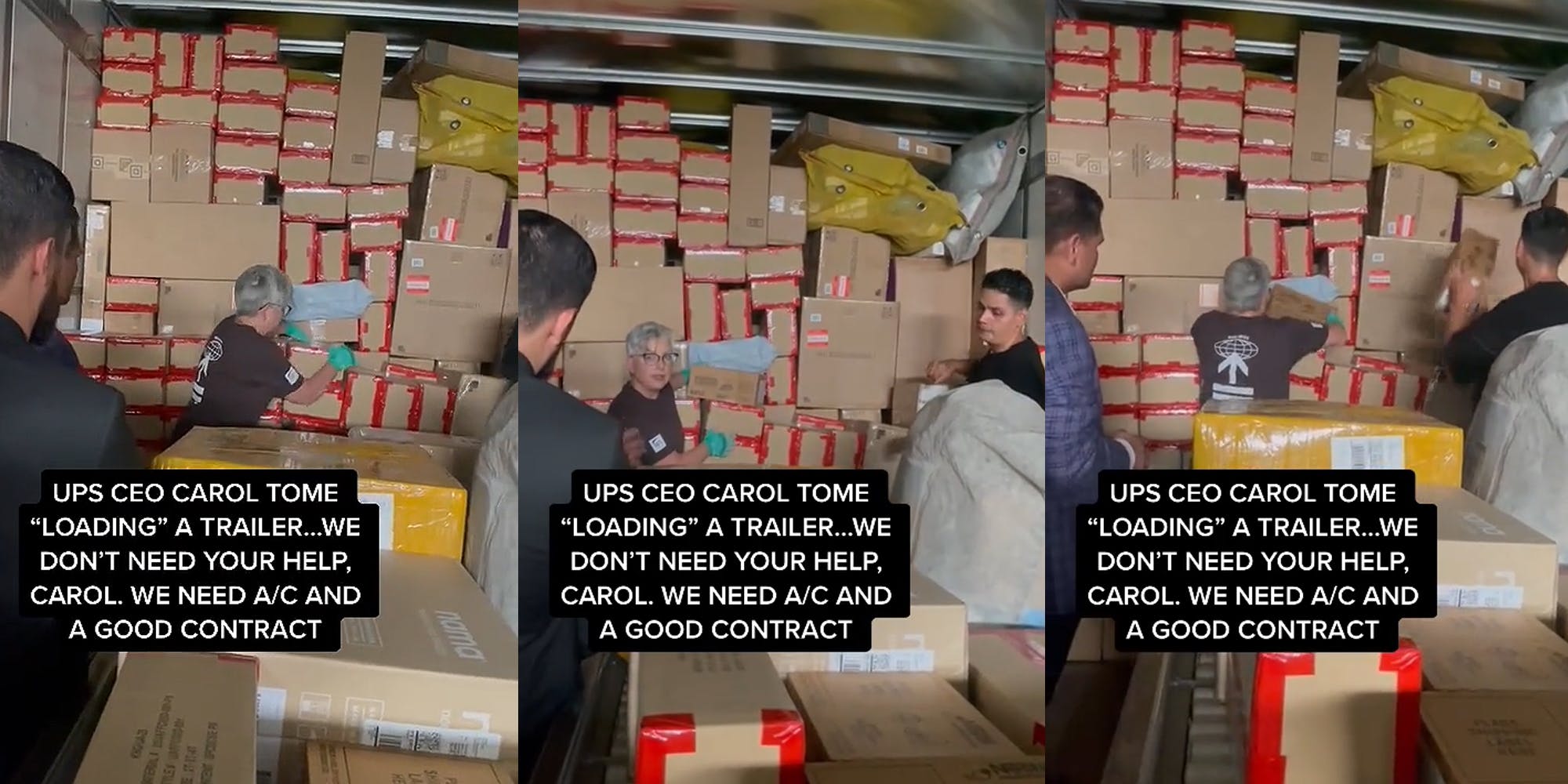 Earlier this week on TikTok, an account supporting the International Brotherhood of Teamsters, also known as the Teamsters, posted a video of UPS CEO Carol Tomé loading packages into the back of a delivery truck.

@teamstersrnf Check out UPS CEO Carol Tome “loading” a trailer in Ontario, CA. It sure doesn’t look like it’s 130 degrees where she works. This PR stunt is a slap in the face to every Teamster. Save your phony down-home act. We’re coming for what we deserve in 2023. #ups #teamsters #upsteamsters #union #safetynotsurveillance #foryou #foryoupage
Advertisement
#fyp ♬ original sound – Teamsters 4 A Democratic Union

The video was captioned “It sure doesn’t look like it’s 130 degrees where she works,” and mocked the CEO for the “PR stunt.” In their post, the Teamsters member told Tomé that she should “Save your phony down-home act. We’re coming for what we deserve in 2023.”

The comment was in reference to what the Teamsters are calling their push for “the strongest possible contract” for UPS workers. Earlier this month, according to their website, the Teamsters kicked off the mobilization of UPS workers across the U.S. and Canada to revamp their labor contract, which is set to expire in summer 2023.

Should any problems arise with the ability to update the contract, the Teamsters said in a video that “We’ll be ready to strike if we need to.”

On Aug. 1, UPS workers across the country began to rally, kicking off a year-long mobilization effort for better working conditions. According to the Teamsters’ website, the rally coincides with the 25th anniversary of a UPS Teamsters strike in 1997, where over 180,000 workers went on stike.

However, the video of Tomé, and a member of the Teamsters calling it out, is causing a bit of controversy.

One commenter said “Getting the CEO out of the office and into the field is step 1 to getting them to understand the problem though,” in what seems to be a rebuttal to the specific Teamsters’ lack of enthusiasm about Tomé’s attempt.

Others are all for it, as they flooded the comment section with disdain for Tomé, saying things like “notice, only loading the small packages,” and “going so slow she would get fired.”

This video came just several days after the Teamsters posted a compilation video of various workers showing pictures of thermometers measuring the extreme heat in the back of their delivery truck.

One truck had a temperature of almost 150 degrees.

Addressing the obscene heat of the trucks is included in part of the Teamster’s demand, as well as updated grievance procedures and maternity and paternity leave.

“The numbers don’t lie,” proclaimed the Teamsters in their video revealing the scorching temperatures inside the van.