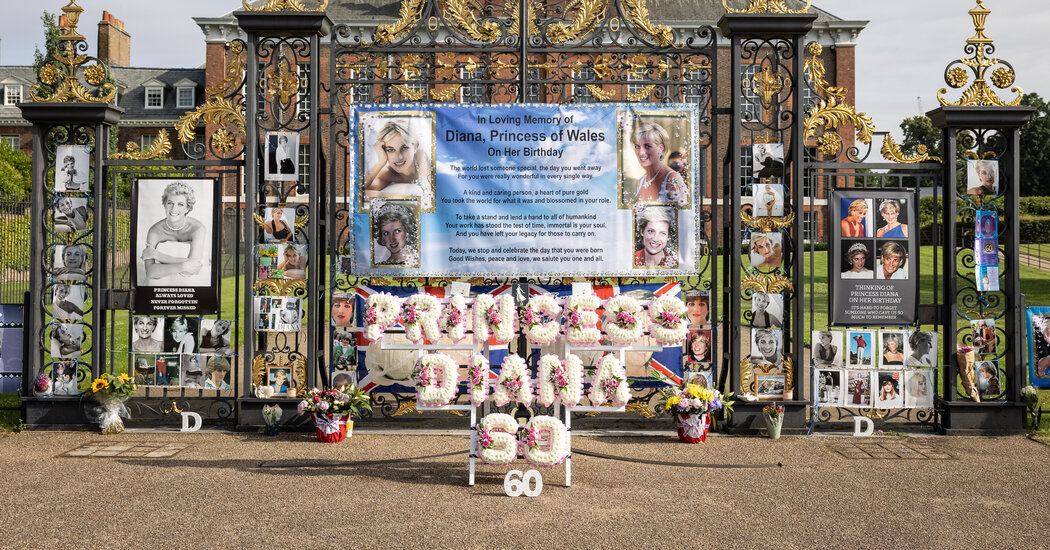 LONDON — Bonded by childhood grief, sundered by adult quarrels, Prince William and Prince Harry are coming together briefly on Thursday to unveil a statue of their mother, Diana, Princess of Wales, on what would have been her 60th birthday.

For a few fleeting minutes in the Sunken Garden at Kensington Palace, the two brothers will in all likelihood set aside a season of acrimony — the anguished charges, and angry denials, of racism and callous treatment — to pay tribute to a woman whose sudden death 24 years ago ended her own turbulent history in the royal family.

But this is no cathartic reconciliation: William and Harry, by all accounts, are still barely on speaking terms.

The elder brother, William, royal watchers say, is still deeply aggrieved at his younger brother, Harry, for a series of interviews in which he and his wife, Meghan, depicted royal life as a kind of gilded prison and said family members held retrograde views on mental health and racial issues.

“It’s going to take a lot for this rift to be healed,” said Penny Junor, the author of several books about the royal family. “The initiative has to come from Harry, and it doesn’t seem to me that he is in any mood to do so.”

Still, on Thursday, the brothers will labor to present a united front as they take part in an intimate ceremony to dedicate the statue, which evokes Diana in a more carefree time, as well as the redesigned garden, planted with a riot of forget-me-nots, sweet peas, tulips, roses and other flowers that she loved.

The Sunken Garden, below the royal apartment where she lived, was a refuge for Diana, according to officials at Buckingham Palace. She often played there with William and Harry, who later had their own quarters in Kensington Palace, before Harry abruptly announced in 2020 that he and Meghan, a biracial American former actress, would withdraw from official duties and move away from Britain.

The couple settled in Montecito, Calif., where Meghan recently gave birth to their second child, Lilibet Diana, whose name pays tribute both to Harry’s mother and to his grandmother, Queen Elizabeth II (her childhood nickname was Lilibet). Meghan did not fly to London for the unveiling, and Harry was not scheduled to stay around long after the 30-minute ceremony.

Harry and William were last reunited in April at the funeral of the queen’s husband, Prince Philip, walking behind their grandfather’s coffin much as they had walked together as young boys behind their mother’s funeral cortege. This time, one of their cousins walked conspicuously between them.

As William and Harry departed the service in St. George’s Chapel at Windsor Castle, the British press scrutinized their body language for evidence that they had broken the ice. Aside from a few cursory words and glances there were few signs of a thaw, and Harry quickly flew back to California.

The brothers managed to stay on the same page in excoriating the BBC last month after it published the results of an internal investigation into a sensational 1995 interview given by Diana to the journalist, Martin Bashir. It concluded that Mr. Bashir had used deceitful means to obtain the interview, in which Diana spoke about the adultery that destroyed her marriage to Prince Charles.

William accused the BBC of making “lurid and false claims about the royal family, which played on her fears and fueled paranoia.” Harry, referring to a “culture of exploitation and unethical practices” by the news media, said, “our mother lost her life because of this, and nothing has changed.”

Even then, though, their statements spoke to their lives apart and different worldviews. While William condemned what he called “fake news,” he reaffirmed the importance of a free press and public service broadcasting. Harry put the BBC interview in the context of a systemically broken press and drew a direct link from it to his mother’s death in a car crash in Paris in 1997.

Days earlier, Harry said on a podcast that he thought the First Amendment of the United States Constitution, which protects a free press, was “bonkers.” He added that he did not know much about it, given his recent arrival in the country. Some royal watchers interpreted William’s statement as a subtle dig at Harry for his much-criticized comments.

The rift between the brothers, which opened around the time Harry and Meghan were married, deepened after the couple’s interview with Oprah Winfrey in March. They claimed that before the birth of their first child, Archie, a member or members of the family had expressed anxiety about the skin color of Meghan’s unborn baby.

“We’re very much not a racist family,” William said, when asked about his brother’s allegations.

The social distancing restrictions imposed by the pandemic are expected to keep the ceremony extremely small, which royal watchers said was a blessing because it would reduce scrutiny of William and Harry. Neither the queen, Charles nor William’s wife, Kate, are slated to take part. But Diana’s brother, Charles Spencer, and her two sisters, Sarah McCorquodale and Jane Fellowes, will be on hand.

The statue was designed by the sculptor Ian Rank-Broadley, whose likeness of the queen has been stamped on coins in Britain and the Commonwealth since 1998. The Sunken Garden, conceived by King Edward VII in 1908, was remodeled for the occasion by Pip Morrison, a landscape architect who specializes in historic gardens.

In a statement, Mr. Morrison said he aimed to create “a calming place for people to visit Kensington Palace to remember the princess.”