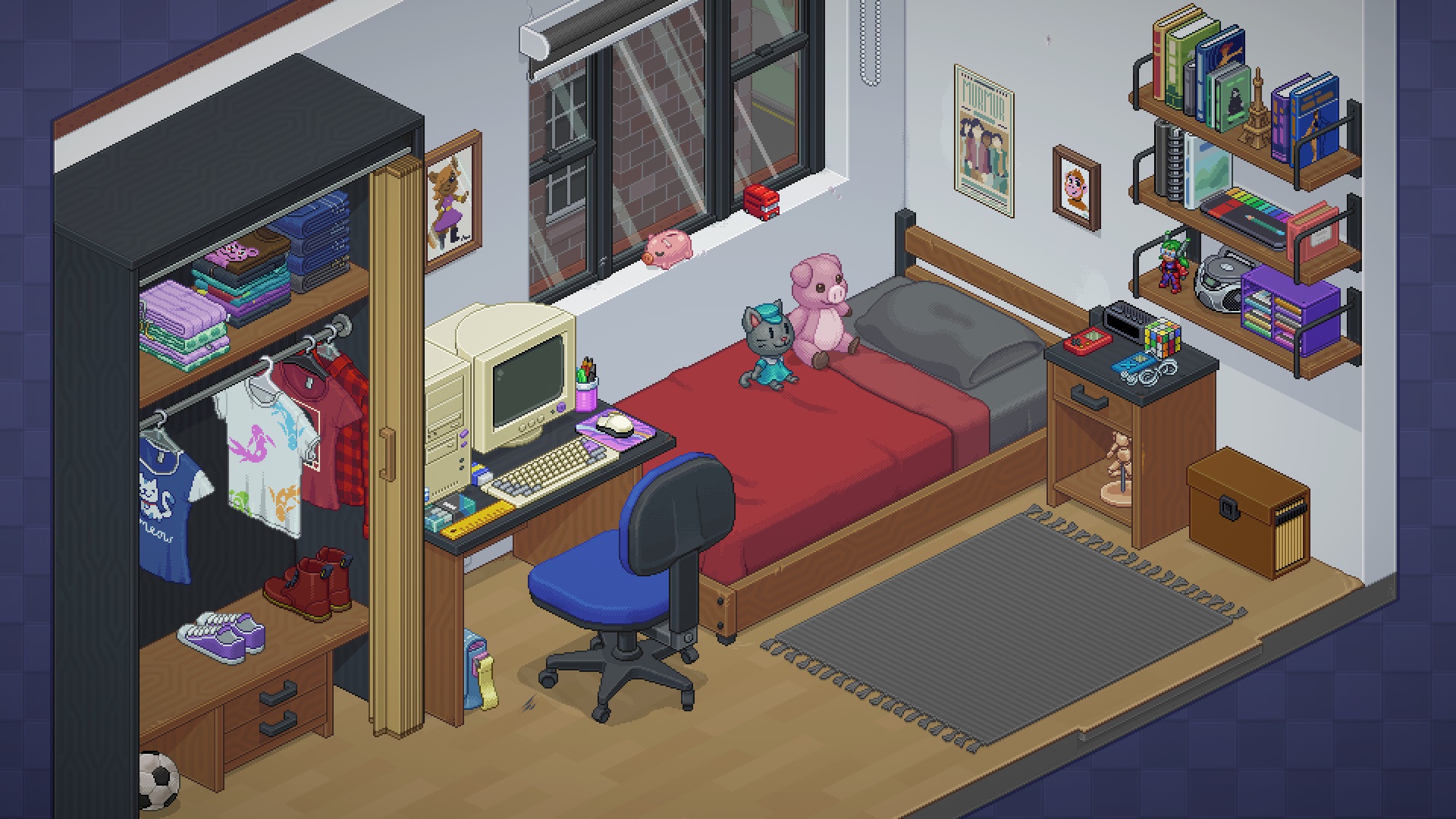 Unpacking is a game that portrays the journey of a teenage girl through her twenties and into her late thirties. The game is often played almost instinctively, and you will need some patience at times. The great soundtrack immerses about the experience, and it is calming from the stress associated with moving in real life, and the game offers you a chance to glimpse into someone’s life. As you learn more and more about the character, the game helps you develop a greater sense of empathy towards someone.

I’m not talking about the idea of moving to a cooler, nicer (possibly cheaper) house, but the actual process of packing and unpacking stuff. Sure you don’t. Unless you’re Marie Kondo.

For me, packing and unpacking stuff is a daunting experience. You open a box full of stuff that needs to go somewhere in your new bedroom, bathroom, kitchen, and living room, and you have to figure out where to put it. The placement must be wise because you don’t want to shuffle things around a lot later (you will still probably have to, though). That kind of work is extraordinarily time-consuming in real life.

In a made-up world, however, unpacking can actually be a much more fun and even emotional experience. There is no need to be like Marie Kondo and find joy in tidying. You just need a bit of free time, an open heart, and attention to detail.

One life in eight moves

Unpacking is a game that portrays the journey of a teenage girl through her twenties and into her late thirties.

It begins in May 1997 in what looks like a kid’s room. Boxes all over the place imply that there has been a recent move, and there are items inside every box that must go somewhere.

As you remove items from the box, you fill in the space in the room and the gaps in your knowledge of the character. A double-deck bed, soccer ball, cup from a sports competition, plush toys, figures of ponies. Everything feels so familiar and, at the same time, unique and intimate.

Seven years later, the girl moves into a place that looks like a dorm or a small apartment. She has a bathroom and kitchen all to herself now. In fact, there is even a PC at her desk with a screen taking up nearly all of the space.

Another few years pass, and she moves in with her boyfriend. As a matter of fact, she is moving in his place, and it does not look like a place for two or a place where our character would feel comfortable. Gray walls, dumbbells in the living room, and small rooms. It’s a typical guy’s apartment, and it takes our girl a while to organize her things. In fact, the dude is clearly a douchebag because there is no place for her diploma on the walls, which ends up under a bed in the bedroom.

Two years later, she moves back to her parents’ house and her room, which looks a bit different. Why has her life gone so wrong? Where does she go from here?

I suppose one of the reasons Unpacking feels so cozy is the number of familiar items you have to deal with. From towels lined up on oven handles to air fresheners perched on toilet tanks, every object in the game makes you feel a sense of déjà vu. You seem to know exactly where each thing should go. And you do — you’ve done it so many times.

As in real life, you need to make good choices regarding where your stuff belongs. For example, stuffed animals go on the bed, pencils on the desk, and a sound recorder goes on the shelf. If you leave pencils on a bed, you will not be able to advance to the next level.

The game is often played almost instinctively. The situation changes, however, when you have a lot of boxes and stuff and the space fills up quickly. At these moments, you have to re-evaluate some of your earlier decisions in the game and find a more suitable arrangement.

The game can even be frustrating at times, especially when you can’t figure out why some things aren’t going where you want them to. This is perfectly fine, however, as Unpacking is a puzzle game, after all, and you will need some patience at times.

An invitation to open your heart

There is something almost meditation-like about the game, which definitely puts you into a flow state. The great soundtrack immerses you from the get-go. The experience is calming, pleasant, and void of the stress associated with moving in real life.

What’s more important is that Unpacking offers you an opportunity to glimpse into someone’s life and draw from their experiences. As you learn more and more about the character, you realize that there is nothing particularly extraordinary about her life: teenage-hood, college, bad relationships, good relationships, friends, hobbies — an absolutely normal and ordinary life. Yet, it is so special, beautiful, and emotional at the same time. If anything, the game helps you develop a greater sense of empathy towards someone you don’t know.

As such, Unpacking invites us to embrace the uniqueness of others’ lives. We often focus on our own experiences, putting them at the center of our existence. That’s fine since we’re, in a sense, the center of the universe. But we shouldn’t lose sight of the fact that everyone’s life is unique and special.

Perhaps only then will we truly appreciate how beautiful life is. And that includes your life too.