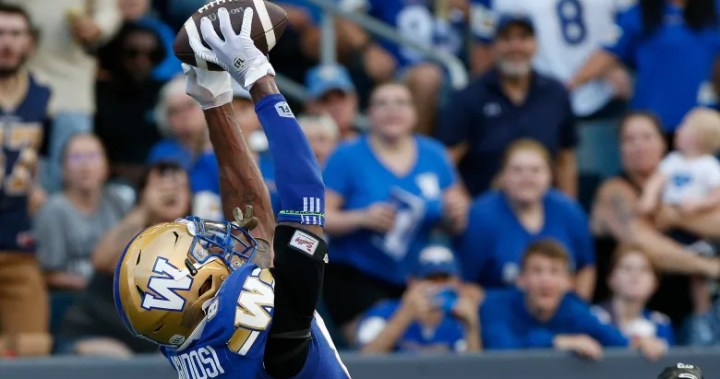 Carlton Agudosi had a CFL debut most receivers can only dream about.

The Blue Bombers slotback caught two touchdown passes to help Winnipeg remain the league’s only unbeaten team after a tense 26-19 victory over the Calgary Stampeders on Friday.

The six-foot-six Agudosi caught a 16-yard TD pass from quarterback Zach Collaros late in the third quarter, and then jumped in the corner of the end zone to haul in a 10-yard touchdown pass with 3:56 remaining in the fourth.

“It was amazing. I’m on Cloud 9,” said the 28-year-old Agudosi, who hails from Somerset, N.J., and spent last season on Winnipeg’s practice roster. “I’m going to enjoy if for tonight and then move on.”

The Bombers improved to 6-0 in the standings in front of a season-high 29,746 fans at IG Field. It’s the first time they’ve opened a season 6-0 since 1960. Their home win streak also bumped up to 13 games (including the playoffs).

The Stampeders missed a number of scoring opportunities and sit at 4-1 after a wild ending.

Calgary started at Winnipeg’s 53-yard line with 1:25 remaining, but Bo Levi Mitchell was sacked right away by defensive end Willie Jefferson. The drive ended with a pass to Calgary receiver

Kamar Jorden bouncing out of his hands in the end zone and into the open palms of Winnipeg defensive back Demerio Houston.

“I saw the ball pop up and said, ‘I gotta get this,”’ Houston said.

Jorden, who only caught one of seven passes thrown his way, vowed to improve when Calgary returns after a bye week.

“The team in general, they got my back and they’re definitely saying it’s not my fault,” Jorden said. “But, you know, I hold myself at a high standard. I expect to make those plays and I will next time.”

Collaros completed 27-of-38 pass attempts for 315 yards with two TDs and no interceptions. Mitchell was 12-for-28 passing for 187 yards with one TD and one pick.

“There’s obviously a reason why you run to the football. If you want to be a good pro football player, you need to run all the time,” O’Shea said. “There’s Demerio running after a crumb and it just happens to pop up and he’s right on the spot to make the play.”

Bombers kicker Marc Liegghio hit his longest field goal of the season from 48 yards out and connected on another from 17 yards. He was good on two of three converts.

Reggie Begelton caught a 19-yard TD pass for Calgary. Rene Paredes made field goals from 50, 39, 14 and 48 yards and added one convert.

Calgary led 7-3 after the first quarter, the score was tied 13-13 at halftime and Winnipeg led 20-16 after the third.

Mitchell said the Stamps hurt themselves.

“They are who they are for a reason because they pull out games,” he said of the two-time defending Grey Cup-champion Bombers. “And they didn’t make those mistakes, we did.”

Liegghio opened the scoring with his 48-yarder at 3:17, but the cheering didn’t last long.

Calgary was forced to punt on its next series, but Bombers returner Janarion Grant fumbled the ball and Stamps linebacker Silas Stewart recovered it. The next play was Mitchell’s 19-yard TD pass to Begelton for a 7-3 lead at 5:28.

After trading field goals early in the second quarter, Winnipeg went up 13-10 when Collaros connected with Agudosi at 13:08.

Calgary tied it 13-13 with Paredes’ 39-yarder as time expired after Liegghio couldn’t get a punt off or run enough to avoid a turnover on downs.

The Stamps rolled out a six-play, 92-yard drive in the third quarter, but it ended with only a 14-yard field goal at 5:33.

Brown’s TD made it 20-16 after a costly Calgary penalty.

The Stamps were called for roughing the kicker after Liegghio went wide left on a 36-yard field-goal attempt. That gave the Bombers a first down at Calgary’s 19-yard line and Brown scored at 11:10.

Calgary got to Winnipeg’s two-yard line, but some miscommunication led to a turnover on downs. As Mitchell threw a pass into the end zone, Begelton and Malik Henry ran into each other trying to catch the ball.

Stamps returner Peyton Logan also had a 63-yard TD on a punt return nixed because of a holding call at 3:07 into the fourth. They settled with Paredes’ 48-yarder at 5:22 to make it 20-19. Liegghio missed the convert after Agudosi’s TD at 11:04.