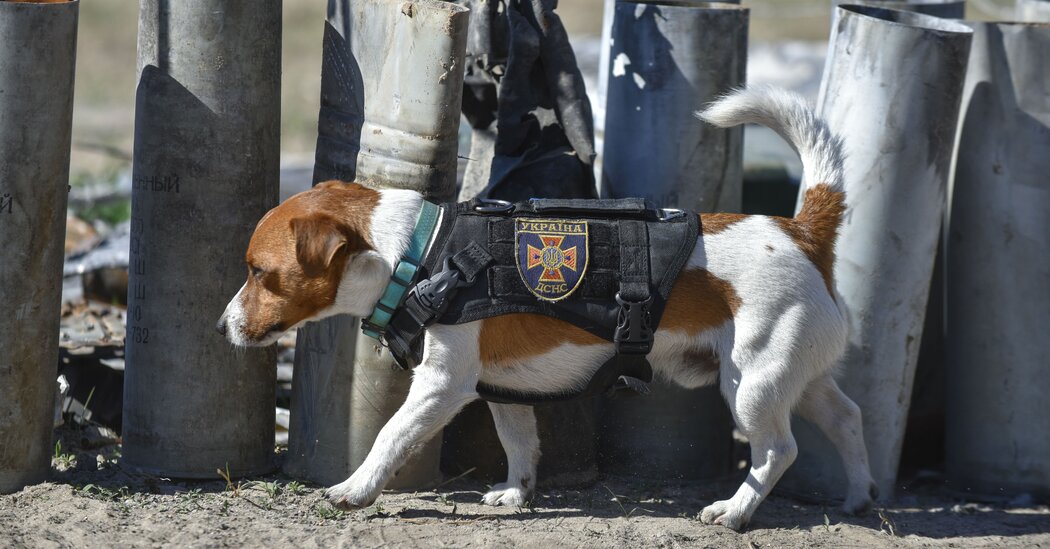 President Volodymyr Zelensky has routinely ended his nightly wartime addresses by announcing state awards for Ukraine’s soldiers. On Sunday, he honored a fighter who is perhaps the country’s smallest — a little dog named Patron.

Patron, whose name means “ammo” in Ukrainian, helps sniff out Russian mines and explosives in the northeastern city of Chernihiv and acts as a mascot of the country’s State Emergency Service.

The dog has found more than 200 explosive devices and was taught pyrotechnic work by his owner, Mykhailo Iliev of the Civil Protection Service, Mr. Zelensky said.

Patron’s rise to fame may be another facet of Ukrainian efforts to control the war’s narrative with viral messaging — experts have said that dramatic wartime tales are critical parts of the country’s information strategy. On the Ukrainian S.E.S.’s Facebook page, where they have been sharing updates on Patron’s work, a video of him putting on his vest and clambering into a serviceman’s lap has been seen hundreds of thousands of times.

A clip of the same footage was shared to Twitter an hour later by Ukraine’s Center for Strategic Communications — a government agency established to counter Russian disinformation that aims to “develop proactive narratives” and “strengthen Ukraine’s image” — and racked up nearly 900,000 views.

Patron is so adored in Ukraine and beyond that he’s inspired various forms of fan art in his honor. He’s beloved by children, and helps them understand safety rules in areas with mine threats, Mr. Zelensky said while presenting the award in Kyiv, the capital. Informing residents of the dangers of mines has been an ongoing effort for officials in Chernihiv and other regions after reports that retreating Russian forces left buried land mines and jury-rigged bombs across large parts of the country.

Along with receiving a state award on Sunday, Patron also met Prime Minister Justin Trudeau of Canada, who was on an unannounced visit to the country and patted his pockets during the ceremony in an apparent attempt to locate treats. The dog was “extremely pleased to meet a true friend of Ukraine,” the S.E.S. reported, “even though Mr. Trudeau did not find a piece of Patron’s favorite cheese.”