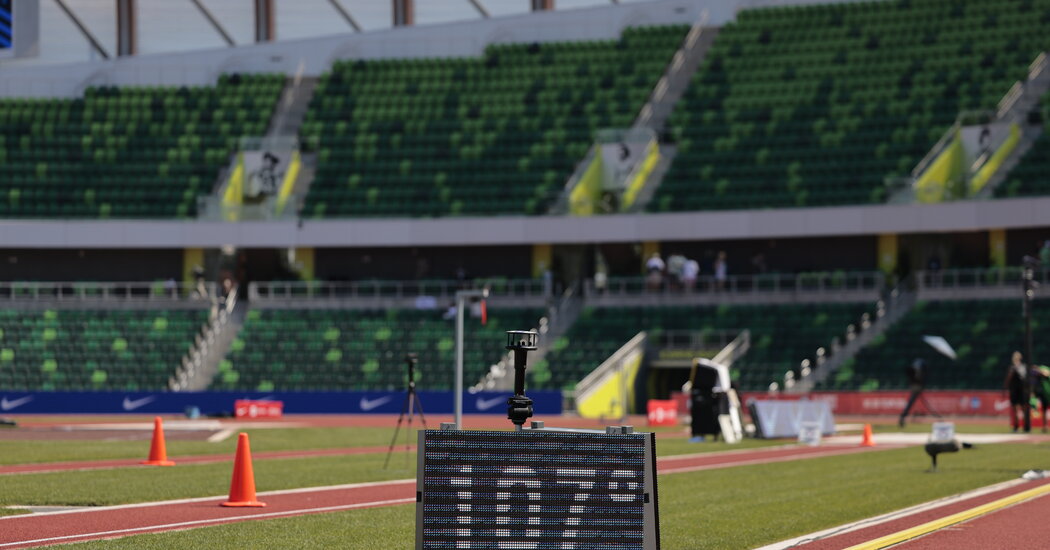 The hot temperatures were nearly unbearable at the U.S. Olympic track and field trials in recent days. But meet officials finally pulled the plug on the races at about 3:30 p.m. Pacific Time on Sunday, announcing in a terse statement that they were delaying the final day of competition until 8:30 p.m. The event will now be televised on NBCSN instead of NBC. The scoreboard at Hayward Field at the University of Oregon in Eugene indicated the temperature was 105 degrees Fahrenheit when the announcement was made.

The delay was announced about 30 minutes before the men’s long jumpers were set to compete — and less than an hour before the runners in the men’s 1,500 meters were set to run their final. The heat should not have come as a surprise to meet officials; temperatures were forecast to approach 110 degrees by midafternoon.

Several marquee finals are scheduled for Sunday — or Sunday night, rather — including the men’s 1,500, the men’s 200 and the women’s 400 hurdles.

The men’s high jump managed to wrap up before the afternoon session was suspended. JuVaughn Harrison won the event, while Darryl Sullivan finished second and Shelby McEwen finished third.

The women’s heptathlon has one event remaining — the 800 — with Kendell Williams holding a slim two-point lead over Annie Kunz. Erica Bougard is in a comfortable third.

As was the case with the men’s 5,000 meters on Sunday, officials moved the women’s 10,000 to Saturday morning in an attempt to beat the afternoon heat. Still, the temperature in Eugene, Ore., was in the mid-80s at the start of the race, and the field thinned as Emily Sisson took firm control after the first few laps.

Sisson, 29, methodically quickened her pace as she lapped many of her competitors, running to a first-place finish in 31:03.82, a U.S. trials record. It was a comeback more than a year in the making: Sisson had been one of the favorites at the marathon trials in February 2020, but dropped out after 22 miles.

Karissa Schweizer, who had already qualified for the Olympics in the 5,000, finished second behind Sisson, while Alicia Monson was third — and wound up in the hospital to receive intravenous fluids. “It’s not every day that you become an Olympian and also get hospitalized from both heat stroke and hypothermia,” she shared.

Because of a heat delay, live coverage has moved to NBCSN beginning at 11:30 p.m. Eastern time. Dalilah Muhammad and Sydney McLaughlin will face off in the women’s 400-meter hurdles, Noah Lyles will attempt to qualify in the men’s 200 meters, and Matthew Centrowitz, the reigning Olympic champion, will lead a deep field in the men’s 1,500 meters.

Worth noting: The top three finishers in each event will punch their tickets for Tokyo, provided they have reached the Olympic qualifying standard.

Gabby Thomas, 24, is a Harvard graduate who is working toward a master’s degree in epidemiology. She is also a first-time Olympian.

On Saturday, she raced away from a deep and talented field to win the women’s 200 meters in 21.61 seconds, which was the third-fastest time in history. Only Florence Griffith-Joyner has ever run faster, and Thomas — who obliterated her own personal best — says she’s primed for Tokyo. She cited the importance of balance in her life.

“Being in school really makes me appreciate what I’m doing on the track,” said Thomas, who now trains and studies in Texas. “It makes you appreciate the time. When I go to the track, this is my time to be on the track and be free.”

Thomas added she had drawn inspiration from the woman who had raced to a fifth-place finish: Allyson Felix

“She was the first person I remember watching on TV, the person who has been in the back of my head,” Thomas said. “To be on the team with her makes me want to cry.”

Felix, one of the most decorated American athletes of all time, had already assured herself a spot in her fifth and final Olympics by finishing second in the 400 meters last week. But while she did not qualify in the 200, she was well aware of the significance of Saturday’s race. It would be her final time competing at the trials.

“Today was just about soaking it in,” she said. “The last time around. I just wanted to take it all in and do the best that I could, and just say thank you to everyone who has supported me along the way. It was really special.”

Thomas was followed by Jenna Prandini in second and Anavia Battle in third. All three broke 22 seconds, a notable mark for 200-meter runners.

EUGENE, Ore. — The 10th and final day of the U.S. Olympic track and field trials started earlier than originally planned on Sunday, and it had everything to do with the one thing that none of the athletes could control: the weather.

Perhaps you’ve heard? It has been hot — so very hot — in the Pacific Northwest in recent days, and temperatures were forecast to approach 110 degrees on Sunday as the trials were set to wind down with seven finals and the conclusion of the women’s heptathlon.

Well, the PDX airport is currently sitting at 110 degrees as of 2:03 PM PDT. This is the hottest temperature ever recorded at the airport since historical records began in 1940. We expect temperatures to continue rising a bit more over the next couple of hours. #PNWHeatwave

One of those finals, the men’s 5,000 meters, was moved from mid-afternoon to mid-morning, when it was expected to be slightly (slightly) cooler. Temperatures were nearing 90 degrees ahead of the start. The broiling conditions seemed to make no difference to Paul Chelimo, who raced to the win in 13 minutes 26.82 seconds — and occasionally wagged his finger at his opponents.

“Go hard or suffer the rest of your life,” Chelimo said in a post-race television interview.

Chelimo, the Olympic silver medalist in 2016, was closely followed by Grant Fisher and Woody Kincaid, both of whom had already qualified for the Olympics in the 10,000 meters.

In winning the men’s 400-meter hurdles on Saturday, Rai Benjamin came tantalizingly close to breaking one of the sport’s most longstanding records. Benjamin finished in 46.83 seconds, just off Kevin Young’s world record of 46.78, which he set when he won gold at the 1992 Olympics.

“I was like, ‘Daaaang!’” Benjamin said of narrowly missing the record. “It hurts a little bit that it was right there and I couldn’t grab it. But it’s just more fuel for the fire.”

For all his pyrotechnics, Benjamin might not have even been the most compelling hurdler at Hayward Field. Competition came in the form of Grant Holloway, who dominated the men’s 110-meter hurdles to secure his Olympic berth. His fastest time came in the semifinals when he ran 12.81 seconds to finish a hundredth of a second off the world record. He won the final in 12.96 seconds.

Even as he left the stadium abuzz, Holloway was oddly matter-of-fact about his day at the office: He did what he expected to do. Onto the next one.

“No emotions at all,” he said. “That’s what happens when you execute at a high level.”

The former Oregon football star Devon Allen (who placed fifth in the event in Rio) finished second behind Benjamin, and Daniel Roberts was third.