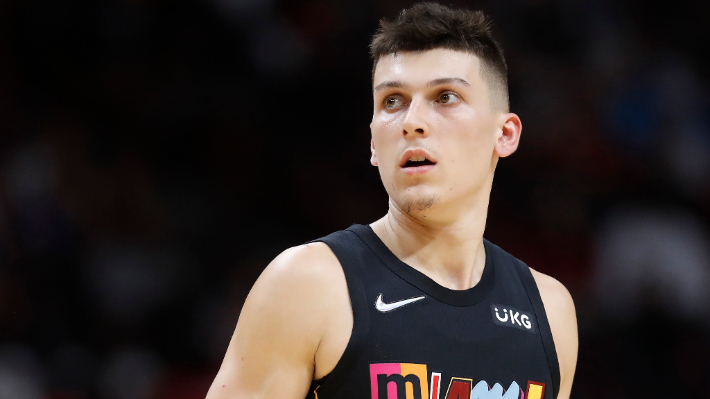 Tyler Herro has gotten off to a terrific start to the 2021-22 season, as he has appeared to take the leap needed for the Heat as their sixth man and much needed microwave off the bench.

Herro came into Wednesday night’s contest with the lowly Pelicans averaging 21.9 points per game on 46.1/38.9/86.8 shooting splits and found himself in the starting lineup to serve as point guard with Kyle Lowry out for the night. Herro, who’s averaging 3.9 assists per game, was looking to do a bit more facilitating in this one, but sometimes the buckets just happen to find young Tyler.

In the third quarter, Herro looked to set up Jimmy Butler on the break with a lob from halfcourt that was nowhere really close to connecting with Butler, but instead went directly into the basket for the most unlikely three-pointer of the year from Herro.

The reaction of Kyle Lowry and the Heat bench is terrific, as they celebrate it as if Herro meant it all along. That bucket was part of an extended 34-18 run in the third quarter for Miami to run away from the Pelicans, on their way to a 113-98 win, with Herro getting a little divine help to keep his early shooting numbers rolling along.