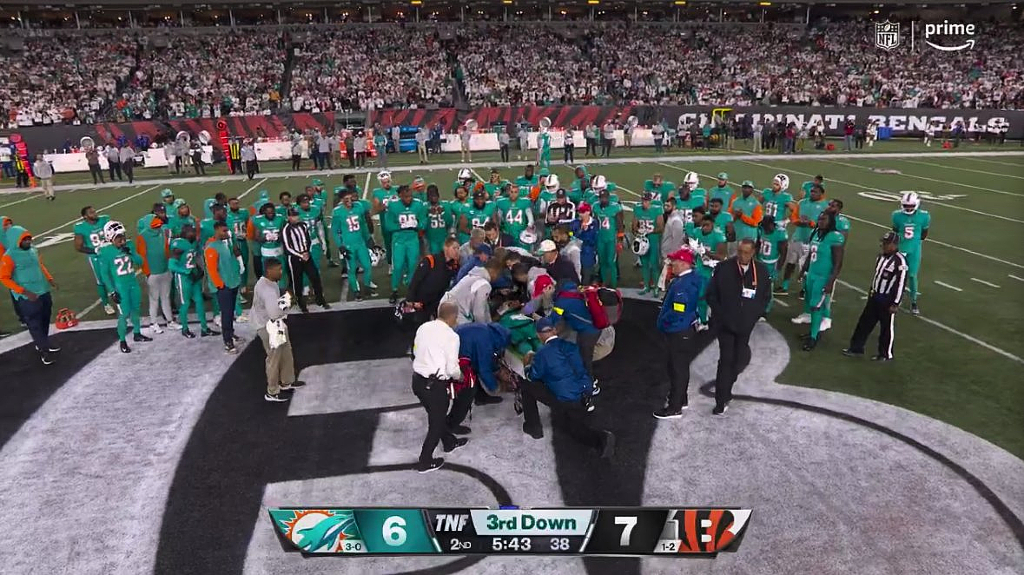 A week ago, Tua Tagovailoa got pushed to the ground late in the second quarter against the Bills and hit the back of his head on the turf, causing him to be extremely wobbly as he got up and was immediately taken to the locker room.

However, the young star QB returned for the second half with the Dolphins claiming it was his back locking up that caused him to struggle to walk off the field, and he led a comeback win over the Bills. On Thursday night, Tagovailoa was back on the field in Cincinnati and was again slung down after a sack against the Bengals in the second quarter, bouncing the back of his head off the turf and immediately went into a scary fencing response.

Tagovailoa would remain on the ground for several minutes as he was tended to by trainers, who removed the facemask from his helmet and brought out a backboard and stretcher to take him off of the field. It was a scary scene in Cincinnati and one could only hope it was the Dolphins taking precautionary measures, but given what happened to Tagovailoa just five days ago, there’s considerable concern that he’s sustained another significant head injury.

The NFLPA had already launched an investigation into Tagovailoa being cleared of concussion protocol on Sunday, and if there’s any findings in that investigation of the Dolphins clearing him too quickly or not following proper protocols this week, allowing him to play this week as he took another vicious hit to the back of the head will look considerably worse.

UPDATE: The first initial update from the team is that Tagovailoa is out with “head and neck” injuries.

Injury Update | Tua Tagovailoa is out of the game with head and neck injuries.

The second update provided a sliver of good news in that Tagovailoa is conscious and has movement in his extremities, and has been taken to a local hospital.

Tua Tagovailoa has been taken to a local hospital for further evaluation. He is conscious and has movement in all his extremities.

Finally, Kaylee Hartung reported on the Amazon broadcast that Tagovailoa was expected to be discharged from the hospital on Thursday night and the team hoped he would fly home with the team back to Miami.