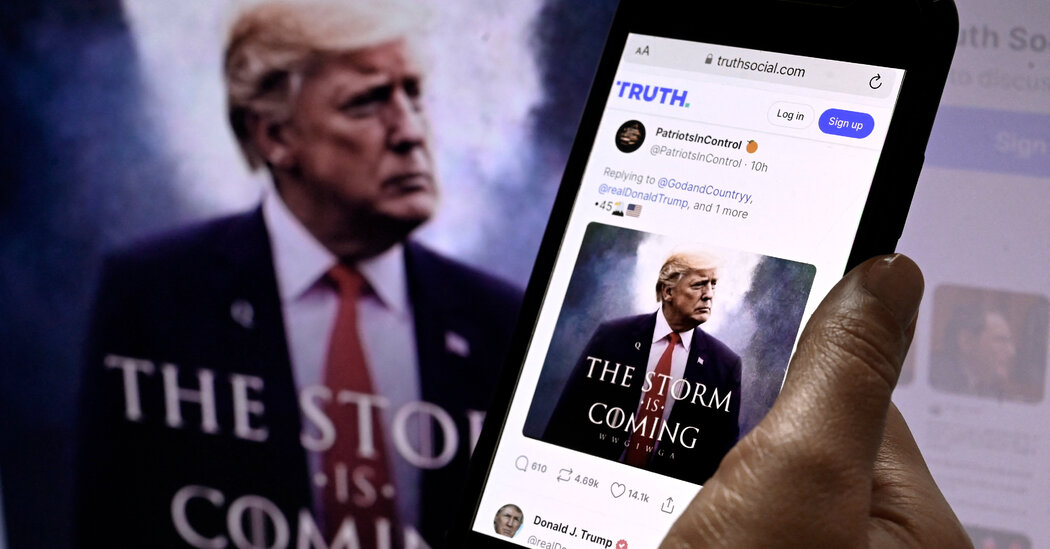 Truth Social, the right-wing social network, has faced one business calamity after the next since it launched in February. Two executives resigned after its app launch was mired with problems. Another executive was fired after filing a whistle-blower complaint, claiming that Truth’s parent company was relying on “fraudulent misrepresentations.” Two federal investigations are putting $1.3 billion in much-needed financing in jeopardy.

Yet users logging into Truth Social each day saw something quite different during that time: a vibrant right-wing ecosystem increasingly brimming with activity.

Truth Social’s long-term future remains in doubt, but experts say the app itself has only grown more influential in conservative circles ahead of the midterm election.

Much of that is owed to former President Donald J. Trump, one of the app’s founders and its star, who now uses Truth Social as his primary megaphone to the world. His posts on the site reach more than four million followers and regularly reverberate across mainstream news and social media sites.

He is now joined on Truth by a coalition of right-wing Americans, including conservative celebrities like Dan Bongino, the radio host and television commentator; political firebrands like Representative Marjorie Taylor Greene of Georgia; and a constellation of conspiracy theory peddlers, far-right influencers and rank-and-file voters.

The website had 1.7 million unique visitors in September, according to estimates from Similar Web, a company that monitors web traffic. That barely registers as competition against mainstream sites like Facebook and Twitter. But it towers over its closest social media rivals, including Gab, Parler, Gettr, MeWe and Minds, which averaged about 360,000 unique visitors that month.

“How many of you are on Truth Social?” Kari Lake, the Republican candidate for governor of Arizona, who has repeatedly sowed doubt about election integrity, said at a recent rally. The crowd erupted in applause. “If you’re not on it, go there and get on it quick.”

The site has become a key organizing platform for election deniers ahead of the midterms, stoking concerns about voter fraud and spreading rumors about problems at the polls. One group used the site to promote stakeouts of ballot drop boxes in a search for illegal voting, posting a picture on Truth that went viral and helped spur similar efforts in at least 10 states.

Mr. Trump has used the site as a public sounding board for his legal defenses as several investigations encircle him. He has continued to shape Republican talking points and boost candidates running in close races. And he has embraced messages and imagery from QAnon, the conspiracy theory movement that also found a new home on Truth Social.

“I definitely see Truth Social as a place where these various factions are coalescing,” said Josephine Lukito, an assistant professor at the University of Texas at Austin’s School of Journalism and Media who studies the relationship between disinformation and violence. “Both the more traditional Republicans who are Trump supporters as well as the more far-right, extremist and conspiratorial.”

The real test for Truth Social may arrive in the coming months, as initial excitement around the app fades and the problems with its financing possibly come to a head. The site shows few signs of courting a wider mix of users from across the political spectrum, which would be necessary to reach lofty targets set by the company before the app launched.

The site’s parent company, the Trump Media and Technology Group, has its hopes pinned on a deal announced a year ago with Digital World Acquisition, a special purpose acquisition company that raised $300 million in an initial public offering of stock. The company later secured commitments from three dozen hedge funds to provide an additional $1 billion in financing upon the completion of the merger.

But the deal and that $1.3 billion are now in doubt as investigations by federal prosecutors and securities regulators could force Digital World to liquidate itself in early December and return to shareholders the money raised in its I.P.O., derailing the merger. Digital World has struggled to get its shareholders to approve a measure that would give it until next September to complete the merger with Trump Media. The SPAC faces another deadline for securing that vote on Thursday.

If the deal with Digital World collapses, Trump Media will need to come up with financing to keep Truth Social running. It has raised roughly $37 million, mainly from Republican political donors.

William Wilkerson, a former Trump Media executive who was fired in October after he said publicly that he had filed a whistle-blower complaint with the Securities and Exchange Commission, said in an interview that the company was using up about $1.7 million in cash each month. Truth Social recently began running advertising on its site.

But Mr. Wilkerson said if the deal with Digital World were to fail, a plausible alternative would be for Trump Media to consider a merger with Rumble, a conservative video-sharing alternative to YouTube, which has emerged as Trump Media’s main business partner.

Mr. Wilkerson, as well as a second person with knowledge of Truth Social’s operations, said about half the people working at Trump Media’s office in Sarasota, Fla., are Rumble employees. Rumble provides much of the back office operation to Truth Social. In August, Mr. Trump’s company joined the video-sharing company’s ad platform.

Rumble recently completed its own merger with a SPAC, giving it access to roughly $400 million in cash.

“It is a high probability now that Rumble is a publicly traded entity,” Mr. Wilkerson said during the interview, which he did while with his legal team of Philip Brewster, Patrick Mincey and Stephen Bell.

Trump Media did not address a potential future merger with Rumble. But in an emailed statement, the company blamed the S.E.C. for the delay in completing the merger with Digital World.

“Despite being chartered to protect retail shareholders,” Trump Media said, “the S.E.C. is willfully damaging them with its illicit political targeting scheme — and should expect severe consequences for doing so.”

A combination of Rumble and Trump Media could present an imposing conservative alternative to Twitter, especially as Truth Social faces an increasing competitive threat from Elon Musk, who completed his $44 billion takeover of Twitter on Thursday. He has promised more lenient moderation policies that could draw some conservatives — including Mr. Trump himself — away from Truth Social. Ye, the rapper formerly known as Kanye West, also plans to buy Parler, in a deal that could draw conservative users.

“I like Elon, but I’m staying on Truth,” Mr. Trump said during a Fox News interview after Mr. Musk’s takeover.

But those risks have largely overshadowed a series of smaller victories for Truth Social, capped this month with the release of its long-delayed Android app, making the app available to about 40 percent of Americans who use that operating system. (Its iPhone app launched in February.)

“Did anyone happen to notice that Truth Social is Number One, ahead of TikTok, Twitter, Instagram, Amazon, and all others?” Mr. Trump asked on Truth Social this month after the Android app launched and received more than 100,000 downloads. “Just asking!”

A survey by the Pew Research Center conducted in May found that 27 percent of adults in the U.S. had heard of Truth Social, beating Gettr and Gab, along with the video streaming websites Rumble and BitChute. Only Parler, which launched six years ago, had more name recognition.

Mr. Trump remains the app’s raison d’être. While his four million followers are a shadow of the 88 million who subscribed to his frenetic Twitter feed before he was banned in January 2021 over fear that he would incite violence, his “truths” can resonate far beyond the confines of Truth’s ecosystem.

After Mr. Trump’s Mar-a-Lago home was searched by federal agents looking for classified documents, he made the unsupported claims on Truth that the Federal Bureau of Investigation was corrupted by Democrats, that the documents may have been planted, and that the documents were declassified the whole time.

“If he wants that message to break into the Twittersphere, he needs people to screenshot it or post it or write something about it,” said Jared Holt, the senior research manager for Institute for Strategic Dialogue. “That happens all the time.”

The day after the Mar-a-Lago search, web traffic to Truth Social more than doubled from earlier averages, according to data from Similar Web.

Days later, an armed man tried to break into an F.B.I. office in Cincinnati and was later killed by law enforcement. A Truth Social account bearing the name of the man identified by law enforcement, Ricky Shiffer, had posted about the Mar-a-Lago search and told followers to “get whatever you need to be ready for combat.” The same account also appeared to confess to an attack on the F.B.I.

“That was a tell that the platform was reaching a milestone,” Mr. Holt said. “Because the unfortunate truth is that any platform — once it gets big enough — has to deal with somebody doing something like that.”