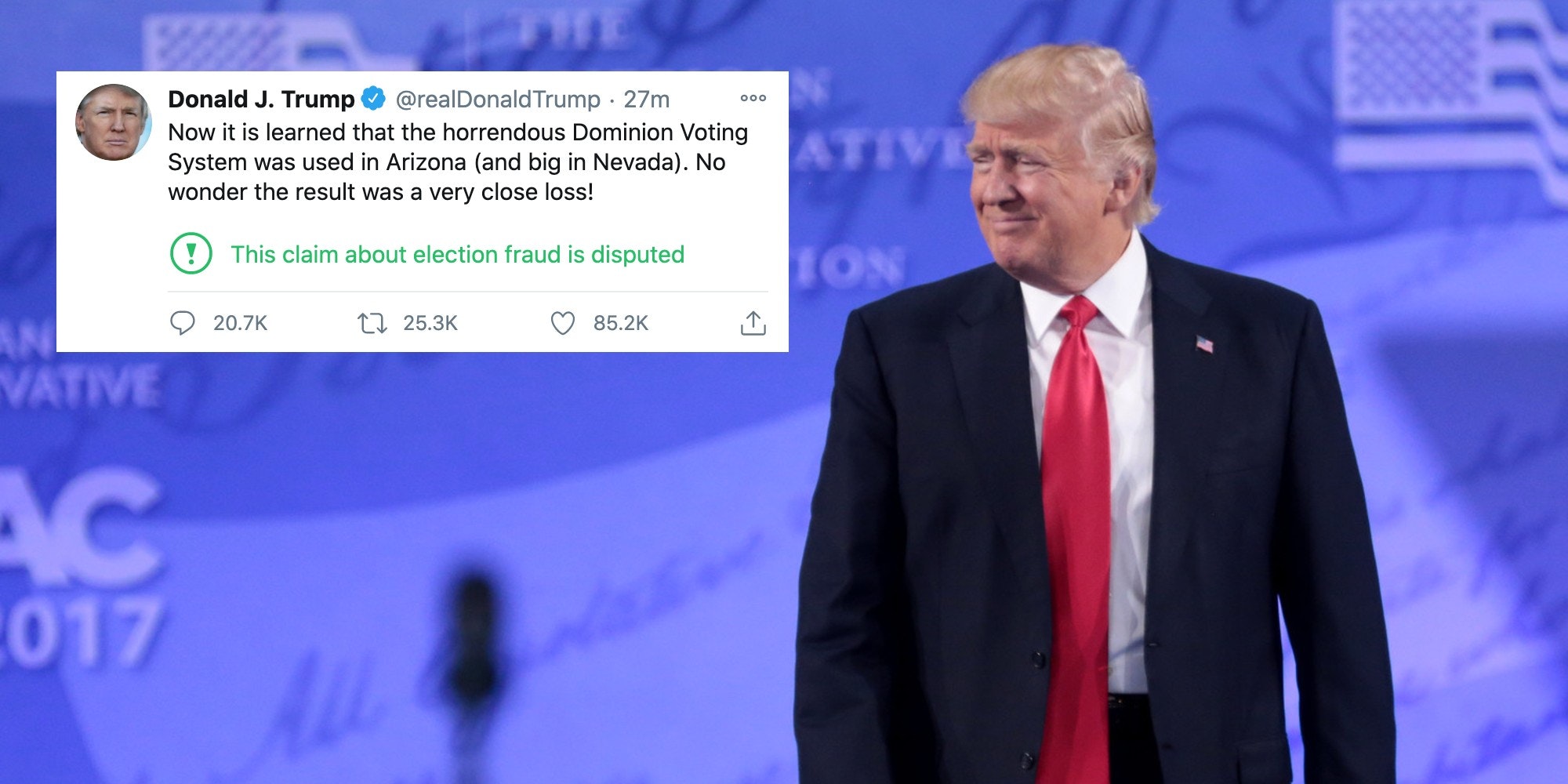 President Donald Trump continued to spread conspiracy theories on Friday that widespread voter fraud altered the outcome of the 2020 election.

In a statement on Twitter, the president appeared to blame his losses in Nevada and Arizona on Dominion Voting Systems.

“Now it is learned that the horrendous Dominion Voting System [sic] was used in Arizona (and big in Nevada),” Trump wrote. “No wonder the result was a very close loss!”

Dominion Voting Systems, an election technology company that provides both vote counting hardware and software, has been at the center of widespread conspiracy theories since Trump began falling behind in the presidential race.

The company was thrust into the spotlight after officials in Antrim County, Michigan, announced on Nov. 4 that human error had caused Dominion’s software to incorrectly report vote tallies.

Given the numerous safeguards in place, election workers were able to quickly spot and fix the issue, which at no point changed or altered actual votes.

But the minor human error convinced supporters of the president that Dominion was part of a grand conspiracy to steal the election from Trump.

Outlandish theories began circulating on far-right forums including 8kun and thedonald.win. The theories, which ultimately claimed that more than 2.7 million votes had been stolen from Trump, eventually made their way to former 8kun moderator and rumored QAnon poster Ron Watkins.

Watkins then passed on his theory, which provides no actual evidence of widespread voter fraud, to the militantly pro-Trump One America News Network (OANN) before it caught the attention of the president.

Trump’s latest claim that it had only recently been learned that Dominion’s products were in use in Arizona and Nevada is also false. Publicly-available information has long let voters know which technologies are in use at any voting location in the country. There is also zero evidence to indicate that Trump lost due to fraud.

Dominion has likewise come out and refuted the president’s allegations as well as popular conspiracies among conservatives that tie the company to former Presidential candidate Hillary Clinton and House Speaker Nancy Pelosi (D-Calif.).

The remarks are part of an apparent effort by the president to avoid admitting that he lost the election. And despite repeated claims from Trump and his allies that evidence of voter fraud is pouring in, the president’s own lawyers have been forced to admit in court that no such evidence actually exists.

Chris Krebs, the director of the Department of Homeland Security’s (DHS) Cybersecurity and Infrastructure Security Agency (CISA), even went as far as to retweet a message urging Twitter users not to share “wild and baseless claims about voting machines, even if they’re made by the president.”

Twitter flagged Trump’s tweet on Friday, putting a label on it that says: “This claim about election fraud is disputed.”

Despite his role as president clearly coming to an end, Trump has refused to concede the race to President-elect Joe Biden and has openly celebrated and encouraged his followers to march on Washington D.C. this weekend in protest of the election.