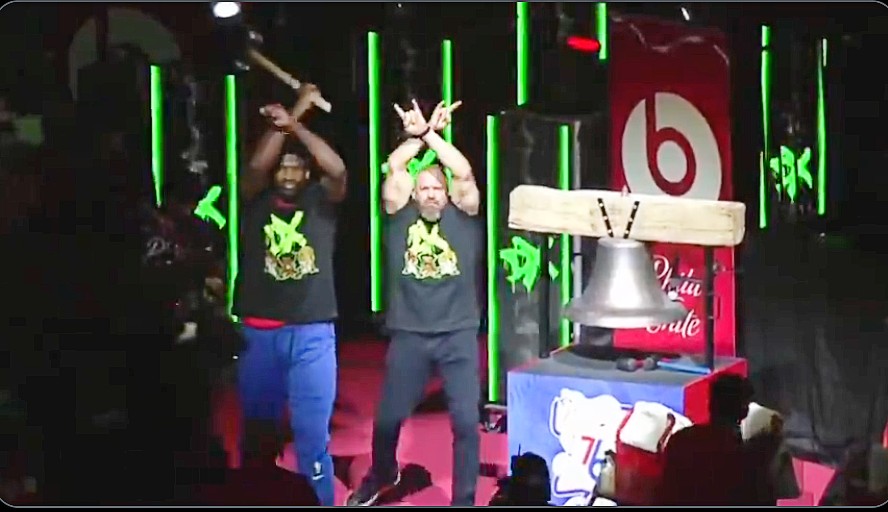 Sixers superstar Joel Embiid returned to the starting lineup on Sunday for Game 1 of Philly’s second round series with the Hawks after missing Game 5 of the first round with a small tear in his right meniscus. During that first round series, Embiid dominated prior to getting hurt in Game 4, and broke out his favorite crotch chop/thrusting celebration to the delight of many — including the WWE legends who inspired it, Triple H and Shawn Michaels.

Prior to Game 1, the Sixers had a surprise for the home crowd, as their nightly bell ringing was done by none other than Triple H, who came out with Embiid wearing DX shirts and crotch chopping at everything in sight.

The full intro was incredible as they came out to the DX theme, ran around doing crotch chops, and soaked up the crowd reaction before Triple H rang the bell with his sledgehammer.

The shirts they were wearing were custom “Thrust The Process” DX shirts with Joel alongside Triple H and Michaels that, if they ever go on sale, might become the most popular shirt in the city of Philadelphia.

Teams always try to dial up the energy and find ways to involve celebrities to get the crowd amped up a little extra before playoff games, and kudos to the Sixers for recognizing an natural opportunity to build off some first round social media chatter and make a DX intro a reality for Embiid.