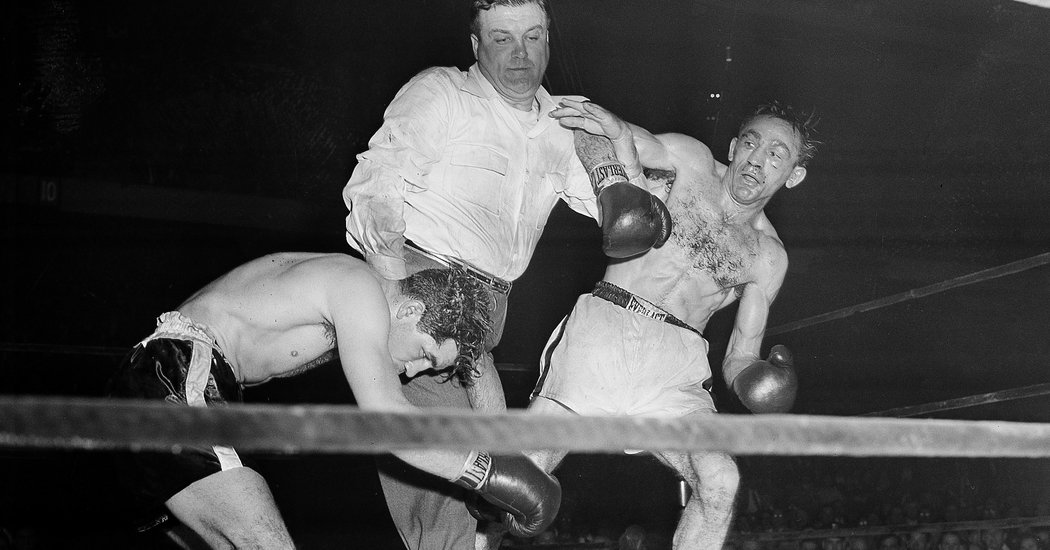 Tony De Marco, a slugging welterweight of the 1950s and the pride of Boston’s largely Italian North End, although he held a world championship for only 70 days, died on Monday in Boston. He was 89.

His death was announced by the International Boxing Hall of Fame, which inducted him in 2019.

Sometimes called the Miniature Marciano, for the undefeated heavyweight champion Rocky Marciano, De Marco was always sure to unleash a furious barrage of punches, win or lose.

“The boy drips courage and determination,” the Boston sports columnist Dave Egan wrote. “Like the Marines at Iwo Jima and the doughboys at Verdun. He’s so remarkably popular not because he’s the greatest prizefighter in the world, which he isn’t, but because he’s so damned courageous.”

De Marco took the world welterweight championship away from Johnny Saxton on April 1, 1955, at Boston Garden, when the referee stopped the bout in the 14th round with a dazed Saxton on the ropes after De Marco had knocked him down with a two-handed attack.

“As far as true boxing went, Tony showed no finesse,” The New York Times reported. “It is doubtful whether he used a left jab. He merely moved forward, hooking his left to the head and body and trying to pound the body in close.”

But De Marco’s most well-remembered fights were his brawls with Carmen Basilio.

Basilio captured De Marco’s championship on June 10, 1955, stopping him in round 12 of a furious fight at the War Memorial Auditorium in Syracuse, N.Y. He defeated De Marco again that November in a title defense at Boston Garden before a crowd of more than 13,000 in what Ring magazine called the Fight of the Year.

De Marco was ahead on all three cards after the eighth round of that second fight, and Basilio’s left hand had been broken. But De Marco was worn out by the flurry of punches he had delivered, and the referee stopped the bout after De Marco was knocked down in round 12 and was unable to get back up.

De Marco scored victories over leading welterweights like Chico Vejar, Kid Gavilán, Gaspar Ortega (who also beat him twice) and Don Jordan. He retired in 1962 with 58 victories (33 by knockout), 12 losses and one draw.

De Marco was born Leonardo Liotta on Jan. 14, 1932, in Boston. His father, James, who had a shoe repair shop in the North End, and his mother, Giacomina, were Italian immigrants.

When he was 11, Leonardo, as he was known then, began boxing for a Boston boys’ club and won the state boys’ championship for 100-pounders. At 15, he was sparring with pros, but he was three years too young to obtain a professional license. He solved that problem with help from a priest and an 18-year-old friend whose identity he took.

“I went down to the parish to see Father Mario, who gave me a fake baptismal certificate and I ‘borrowed’ the name of another kid named Tony De Marco for the certificate,” he told the Cyber Boxing Zone website in a 2011 interview.

“Of course, Father Mario — good man that he was — thought I was using this to get a job, not to become a professional fighter at the age of 16.

“Anyways, shortly after that the real Tony De Marco tells me he was going pro. I said, ‘What name are you fighting under?’ He said, ‘Tony De Marco.’ I tell him, ‘You can’t have it! Pick another name.’ So he took the name of another kid named Michael Termini, who also wanted to turn pro, but he had to take his brother’s name. So there was three of us fighting, all from the same neighborhood, all using someone else’s name.”

His idol as a teenager had been the middleweight champion Jake La Motta.

“I tried to fight like him, just bullying and crowding,” De Marco was quoted as saying by Boxing.com. “I’m not a boxer. Never was and never will be. I just don’t feel right jabbing and countering and trying to be fancy. I tried it when I first started and nearly got killed.”

De Marco was a liquor salesman for several years after retiring from the ring, then moved to the Phoenix area, hoping that the hot, dry climate would ease his 8-year-old son Vincent’s asthma. He opened a cocktail lounge there.

In June 1975, Vincent, then 14, was stuck and killed by an automobile while riding his bicycle. De Marco later returned with his family to the Boston area and became a security officer at the statehouse.

His survivors include his wife, Dorothy, according to Boston Boxing Promotions.

De Marco wasn’t forgotten in the North End, where there’s a Tony De Marco Way. In October 2012, a bronze statue depicting him throwing a left hook was unveiled there, a creation of the sculptor Harry Weber.

De Marco told the crowd honoring him that day, “Never in my wildest dreams did I ever think that all of this would happen to me.”