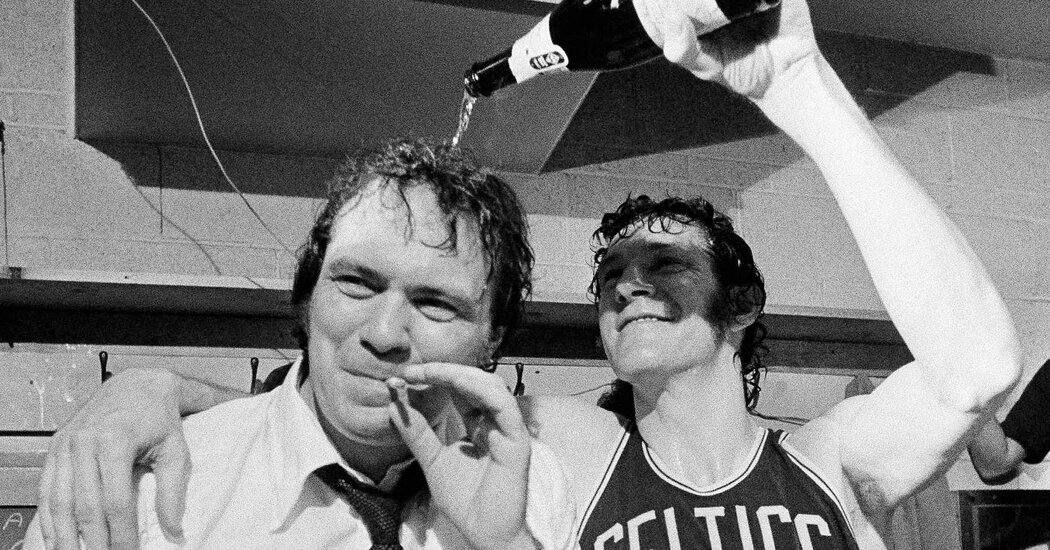 Tom Heinsohn, the Hall of Fame forward who played on eight N.B.A. championship teams with the Boston Celtics, coached them to two titles and became their passionate broadcaster for more than three decades, has died at 86.

The Celtics announced his death but gave no other details.

Playing on the parquet floor of the old Boston Garden from 1956 to 1965, Heinsohn brought a superb shooting touch to the dynasty engineered by Coach Red Auerbach. He loved to shoot, most famously hitting flat-trajectory jumpers, and he had a deadly running hook.

Heinsohn was the N.B.A.’s rookie of the year in 1957, capping the season by scoring 37 points when the Celtics defeated the St. Louis Hawks for the first N.B.A. championship in their history, and he was a six-time All-Star.

Coaching a rebuilt team after the retirement of Bill Russell, who had become a player-coach with the Celtics after revolutionizing the game with his defensive prowess at center, Heinsohn took Boston to N.B.A. championships in 1974 and ’76.

As the Celtics’ TV color analyst, he bemoaned referees’ calls that went against Boston while exulting, “That’s the basketball I’m talking about!” when they scored off fast breaks the way the Celtics of his playing days had done. He gave the Celtics players “Tommy points” for hustle and toughness.

Apart from his intensity behind the microphone, Heinsohn endeared himself to Celtics fans by showing a softer side, telling how “the redhead in Needham” would have reacted to particular plays — a running tribute to his wife, Helen, who was being treated for cancer. (She died in Needham, Mass., in 2008 at 68.)

Heinsohn found a serene world as an accomplished painter, pursuing his love of art while playing and coaching. His works, most notably watercolors of the New England seashore, were displayed in shows and at museums.

He was bemused by that calling, spawned in his grammar school years in New Jersey.

“I was probably the least likely artist,” he once told The New York Times. “As a coach I was the Ralph Kramden of basketball, always stomping and screaming.”

Thomas William Heinsohn was born on Aug. 26, 1934, in Jersey City. After his family moved to Union City, N.J., he became a basketball star there at St. Michael’s High School.

In college Heinsohn was an All-American at Holy Cross in Worcester, Mass., taking the Crusaders to the 1954 National Invitation Tournament championship as a sophomore and averaging 27.1 points a game as a senior. He scored 1,789 points in three seasons to surpass his future teammate Bob Cousy as the school’s career scoring leader.

The Celtics made Heinsohn a first-round draft pick, and he won rookie of the year honors at a milestone time for the team — its first championship after the midseason arrival of Russell, who had played in the 1956 Summer Olympics in Melbourne, Australia, after leading the University of San Francisco to two N.C.A.A. titles.

He played at varying times with Russell, Frank Ramsey, Tom Sanders and John Havlicek up front, and Cousy, Bill Sharman, K.C. Jones and Sam Jones in the backcourt.

But Heinsohn became the target of Auerbach’s ire over his conditioning.

In his memoir “Second Wind” (1979, with Taylor Branch), Russell said that Heinsohn had not always gotten the most out of his talent.

“Though Red yelled at him for about an hour every day, it wasn’t enough,” Russell wrote. “Tommy should have been a much better rebounder than he was, and he never got into peak condition.”

But as K.C. Jones told Dan Shaughnessy in “Ever Green” (1990), “You couldn’t intimidate Heinie ’cause he was too busy shooting the ball and thinking, ‘My shot, my shot, my shot.’”

Heinsohn got revenge on Auerbach when he turned a practical joke back on him, handing him an exploding cigar — Auerbach had once given him one — which the coach lit, only to have it blow up in his face.

Heinsohn was president of the N.B.A. players’ association when a pension dispute delayed the players taking the floor at Boston Garden for the start of the 1964 All-Star Game. They did come out of their locker rooms, and the issue was eventually resolved.

Heinsohn retired because of a foot injury when he was only 30 years old, having averaged 18.6 points and 8.8 rebounds a game. He was elected to the Basketball Hall of Fame in Springfield, Mass., in 1986.

Coaching Celtics teams built around center Dave Cowens and guard Jo Jo White, along with veterans like Havlicek, Paul Silas and Don Nelson, Heinsohn had a string of winning seasons. In addition to winning two championships, he was the N.B.A.’s coach of the year in 1973, when the Celtics had a league-best 68-14 record, though they lost in the playoffs to the Knicks, the eventual league champions.

Auerbach, who put those Boston teams together as the general manager, replaced Heinsohn with Sanders in January 1978 when the Celtics were 11-23, but called it “the most traumatic experience in my 32 years in the N.B.A.” He complained that the players had been around Heinsohn so long that they didn’t seem to be listening to him any longer.

But Heinsohn was very much a Celtic for decades to come as their TV analyst. Playing off his longstanding fury with referees’ calls, he once did a Miller Lite commercial in which the former referee Mendy Rudolph ejected him from a bar in an argument over whether the beer was less filling or tasted great.

Heinsohn is survived by two sons, Paul and David, and grandchildren.

Mike Gorman, Heinsohn’s longtime partner as the Celtics’ play-by-play announcer, viewed him as a Celtic for life.

“Tommy doesn’t really do color,” Gorman told The Boston Globe in 2005. “In his heart he’s still coaching the Celtics and always will be. If it was possible to still be playing for this team, he would be.”