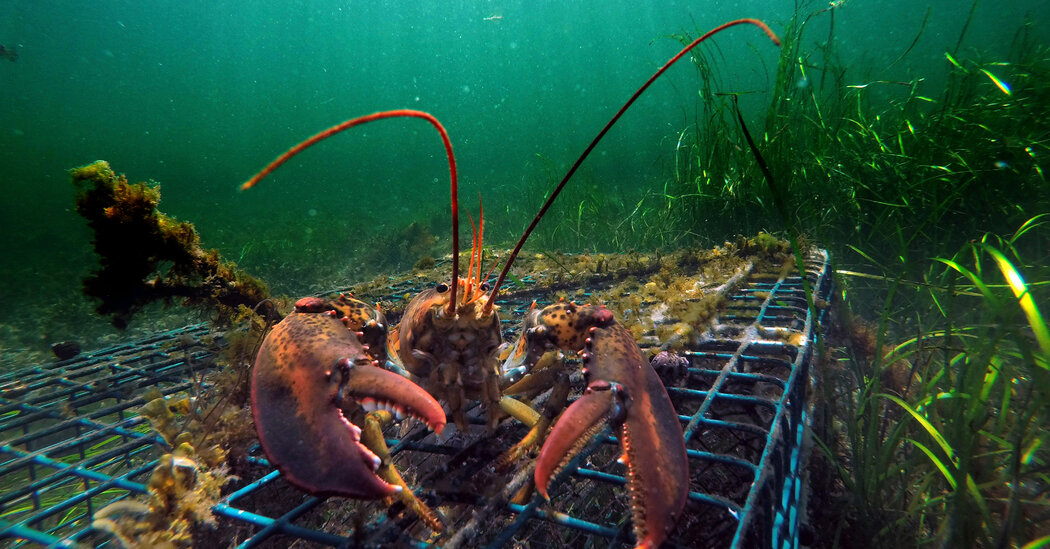 American lobster may be a beloved and delicious splurge, but it is no longer a sustainable seafood choice and consumers should avoid eating it, according to Seafood Watch, a group that monitors how fish and other seafood are harvested from the world’s oceans.

The organization made the announcement last week, motivated by concerns that the ropes used to fish for lobsters and some other seafoods often entangle critically endangered North Atlantic right whales. The marine mammal’s population has fallen to the low hundreds, and federal wildlife authorities say it faces extinction in the near future.

Seafood Watch is part of the Monterey Bay Aquarium in California and provides scientific guidance to businesses, including formal partnerships with some of the country’s major seafood buyers, about what seafood they sell to customers. The organization also provides seafood recommendations directly to consumers. Its credit card-size seafood purchasing guides can be found sitting next to packets of oyster crackers or stacks of wet wipes at seafood markets and in restaurants across the country.

Seafood Watch put American lobster, as well as some species of crab and fish, on its red list because of the effect fishing for the species has on North Atlantic right whales.

The organization hopes that telling people to avoid American lobster, which is harvested off Maine, Canada’s maritime provinces and in other parts of the Northwest Atlantic, will raise awareness about the right whale’s condition and put pressure on fishery managers and lawmakers to do more to protect the imperiled mammals.

“I think consumers need to understand the impacts of the fishing practices used to catch the food that they consume,” said Mark Baumgartner, a senior scientist at Woods Hole Oceanographic Institution in Massachusetts who studies North Atlantic right whales but is not involved with Seafood Watch. “I think that if people knew more about the plight of right whales, and the role that roped fishing plays in that, there’d be more of a demand for solutions.”

Lobster fishers and their allies in Congress say that Seafood Watch’s decision is unfair given the industry’s consistent compliance with state and federal laws aimed at protecting the whales. It is unclear whether Seafood Watch’s actions will have the intended effect because major sellers and distributors of American lobster may be hesitant to halt sales of the beloved seafood.

While there are several types of lobster, such as the clawless spiny lobster and the blue European lobster, American lobsters are the most popular among consumers. Men and women have been catching the big-clawed crustaceans along the east coast of the United States and Canada mostly the same way since the 1800s.

A vast majority of commercial lobster fishermen still use pots, also known as traps, to catch their quarry. Pots are loaded with bait and lowered to the seafloor, where they are left to soak. To make the pots easy to recover, they are connected to a buoy floating at the surface by a vertical line of rope.

Whales can easily become entangled in these ropes, which can prevent them from reaching the surface to breathe or from diving deep enough to find food. Entangled whales that don’t drown or starve right away may drag gear for years, causing deep lacerations and sapping energy that would be used for reproduction and growth.

“It is a heartbreaking sight to see as they often are under significant stress, frantically thrashing and desperately trying to shake the gear off of their bodies,” said Amy Knowlton, a senior scientist at the New England Aquarium who has been studying right whales for almost 40 years.

Scientists estimate that fewer than 350 individual North Atlantic right whales still live, fewer than 100 of which are breeding females. “Entanglements are now the leading cause of serious injury and mortality for this critically endangered species,” Ms. Knowlton said.

Scientists with the National Marine Fisheries Service determined that in order for the North Atlantic right whale population to avoid extinction, the average number of whales killed by human-related activity needs to be less than one whale per year.

In 2021, the fisheries service announced new rules for catching American lobster in U.S. waters that aimed to reduce the number of vertical lines in the North Atlantic right whale habitat and weaken the lines that are used so entangled whales can more easily break free. The agency also implemented two new seasonal fishing ground closures.

Seafood Watch and other marine conservation organizations said the new regulations were a step in the right direction but didn’t go far enough to help the whales recover.

“On average, 7.7 whales per year are dying due to human causes that we know about,” said Sam Wilding, who is the Seafood Watch fisheries program manager and has been involved in creating the new assessments. “5.7 of those are due to fishing entanglement and the other two are due to vessel strikes.”

Mr. Wilding acknowledged that state and federal fishery managers and industry leaders have been working to address the issue for more than two decades. But the efforts have not been enough to save the whales. “The rate of impact from fishing is far higher than we originally anticipated,” he said.

Drastic measures need to be taken for the North Atlantic right whale to avoid extinction, Mr. Wilding said. Yet, workers in the fishing industry believe that Seafood Watch went too far by encouraging consumers to avoid American lobster.

“The way we manage our fishery has always been one of the best,” said Kristan Porter, a commercial lobster fisherman and president of the Maine Lobstermen’s Association. “As a fisherman, all I can do is go by the rules that are in front of me.”

“There’s not a fisherman in Maine that wants to hurt a whale,” said Steve Train, a commercial fisherman based in Maine who has been lobstering for over 40 years.

Because a vast majority of American lobster fishers play by the rules set out for them by fishery managers and federal agencies, Mr. Porter says he and his fellow fishers should not be punished for the decline of North Atlantic right whales.

One proposed solution to this problem is a transition to ropeless fishing gear, which is used in Australia and is being tested in American fisheries. It works like a traditional crab or lobster pot, but it can be brought to the surface using a remote-controlled float, no rope required.

“This could very easily allow fishermen to fish right around right whales in a way that is not endangering their lives,” said Caroline Good, a large whale ecologist with the National Marine Fisheries Service.

However, such gear is not yet widely available, and each ropeless trap can cost $2,000 to $4,000, while a traditional lobster trap costs between $50 and $180. Earlier this year, Democrats in Congress introduced a bill that would put millions of dollars toward the development and testing of ropeless gear and other technologies that have the potential to protect North Atlantic right whales. It has yet to go to a vote.

However, whether its advice will be heeded remains uncertain. A spokesperson for Whole Foods Market, which partnered with Seafood Watch in 2010, said that it has no plans to stop selling American lobster, but that the company is “closely monitoring the situation” and is “committed to working with our suppliers, local fisherman and fisheries, fishery managers and environmental advocacy groups as the situation develops.”

Experts concerned about the whales hope industry and political leaders will look beyond their immediate criticism of Seafood Watch’s decision and see an opportunity.

Dr. Baumgartner at Woods Hole says that the fishing industry and United States and Canadian governments need to develop solutions that preserve fishing opportunities and protect the whales — quickly.

“It seems like a no-brainer to me to pour all the resources you can into this,” he said.