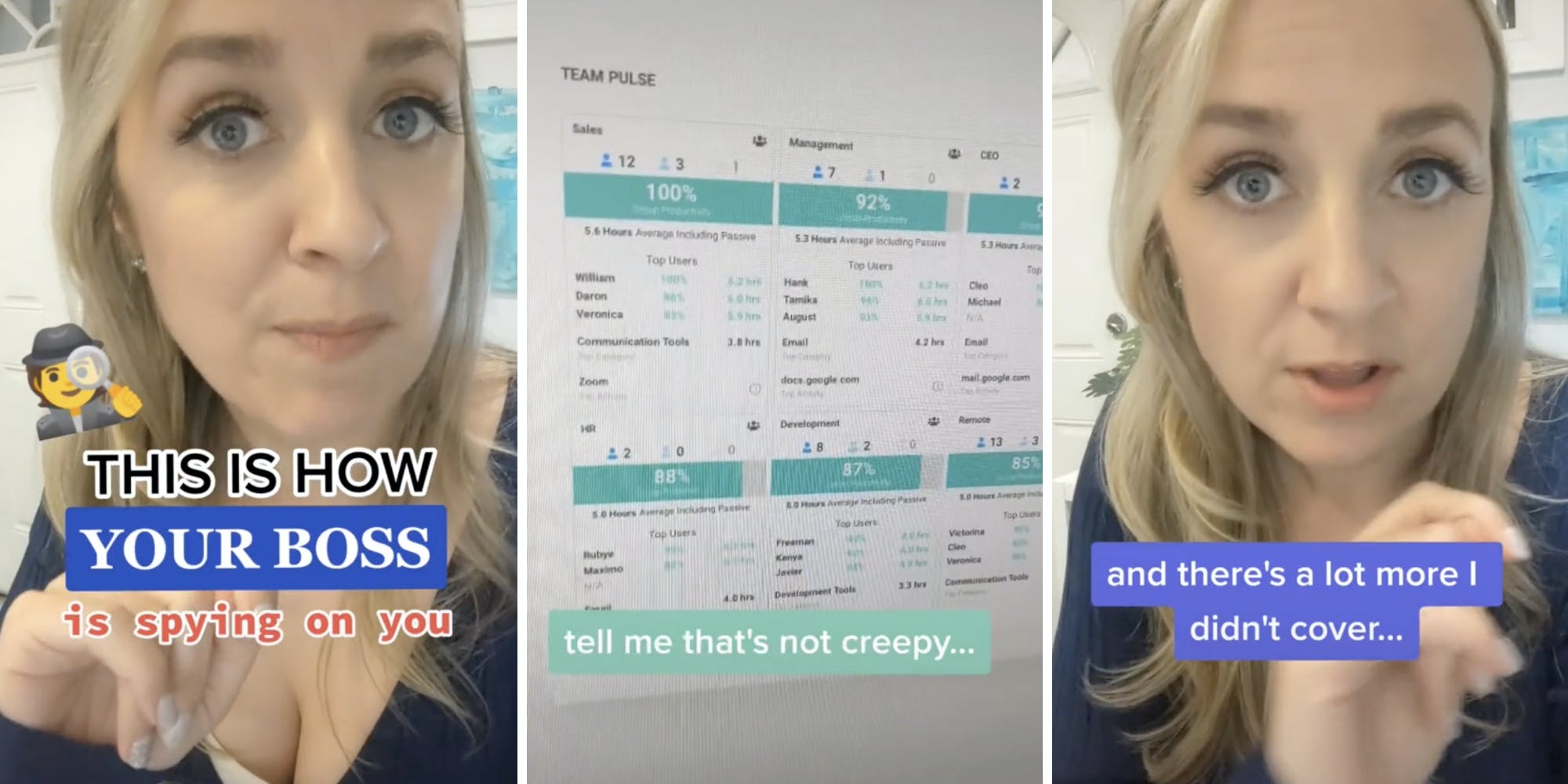 A TikToker shared in a viral video how employers may be spying on and collecting data from their own workers.

In a series of text overlays in the clip, Jennifer Brick (@jenniferbrick) wrote: “This is how your boss is spying on you…”

She goes on to click on what she claims is the “top-paid ad for employee Monitoring software on Google,” software company ActivTrak’s website. “Good news… IT’S FREE,” she claims in the text.

@jenniferbrick do you think this is creepy too? #career #9to5 #spying #corporate ♬ original sound – Jennifer Brick

She points to the website’s terms and conditions that claim the “agent collects your data.”

Brick says she works with a security software company that “functions the same way.”

“But our customers couldn’t access these tools, it was for forensic analysts to find device theirs and worked with local law enforcement to make arrests… it was actually really cool,” she says.

She then goes on to show thumbnails of people on Zoom calls that look like downloadable files.

“That’s not creepy,” Brick sarcastically says. “Not creepy at all.”

Jennifer urges viewers to use webcam covers if they are already not doing so in the video. She adds that in addition to “monitoring your web usage,” the app’s promise to “uncover hidden potential” is corporate speak for “time wasters to punish.”

Jennifer adds that there are ways to “uncover” whether or not applications like the one mentioned in the video are installed on devices that people use for work.

In a follow-up video, Brick aims to share how to tell if one’s boss is spying on them.

She says that the apps won’t show up in their list of installed applications. She says if one is using a Mac OS X-based device, they should head on over to Activity Monitor, Windows, Task Manager. Then, she says, they should start looking for processes that are currently running on that computer that they “don’t recognize.”

This might require a bit of leg work because the processes may show up as file names that don’t exactly spell out what they’re doing, she says. ActivTrak on Windows for example, as Jennifer points out, shows up as scthost.exe. Brick encourages viewers to do a bit of Googling to find out what all of the process names mean.

Jennifer promised a part three of the video as to how one can go about stopping these trackers.

Some TikTokers highlighted Jennifer’s video as a strong reason for why some employees should never use their work computer for anything other than work.

“Don’t even use the work wifi for your phone or personal computer,” one urged.

“Stuff like this is why I have SEPARATE devices and email accounts for fun vs business,” another said.

Others said that they aren’t too worried about their employers knowing how to install and/or monitor activity using applications like this.

“My boss can’t figure out SharePoint, I think I’m safe,” one quipped.

Others were a bit worried about their current employers discovering that they were looking for other job opportunities… on their work device.

“Well I’m applying to jobs at work on my work computer sooooooooooooo,” another said.

The Daily Dot has reached out to Brick for comment via email.

Jack Alban is a freelance journalist for the Daily Dot covering trending human interest/social media stories and the reactions real people have to them. He always seeks to incorporate evidence-based studies, current events, and facts pertinent to these stories to create your not-so-average viral post.