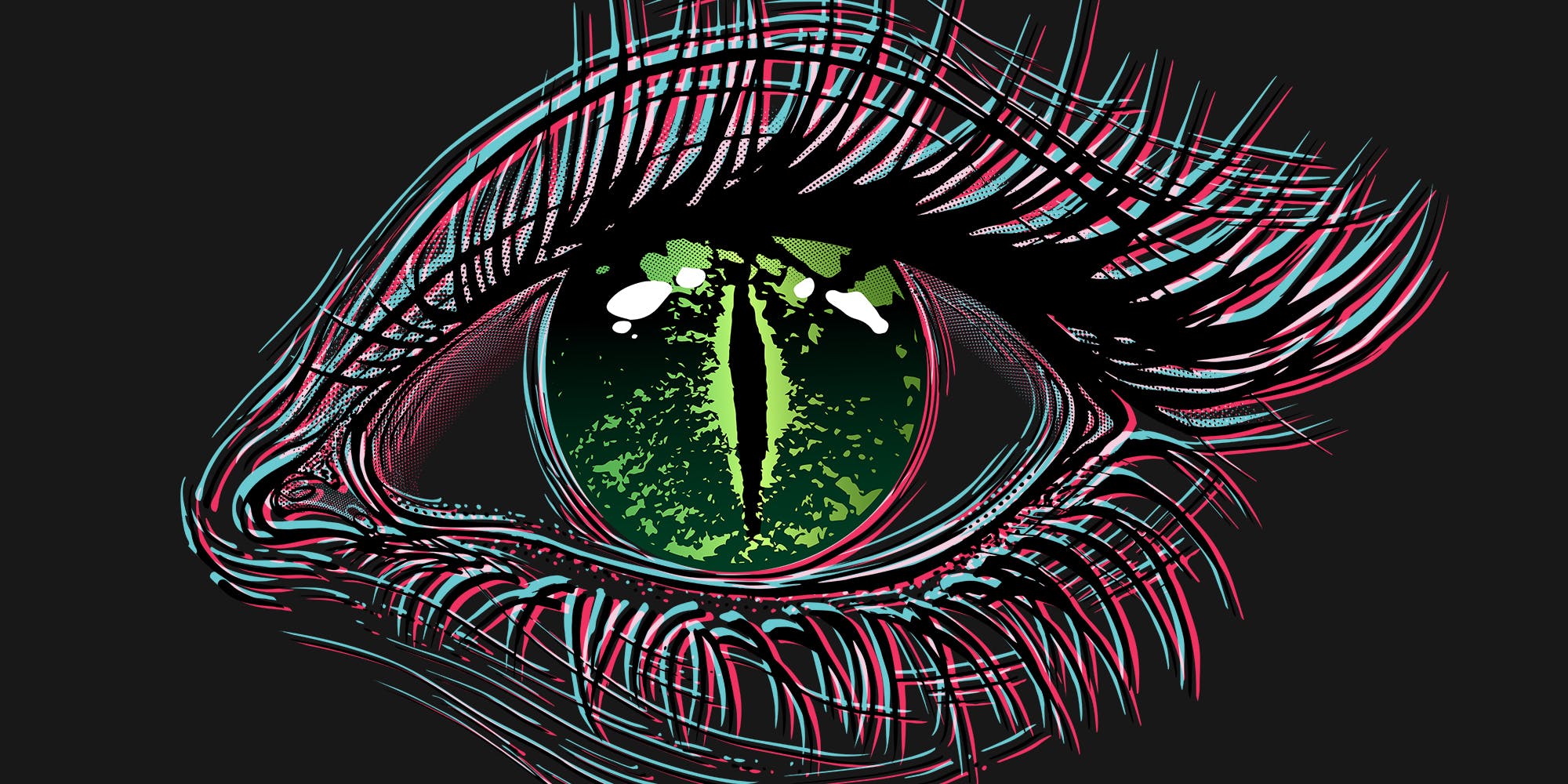 The longer a conspiracy theory lasts, the more it enmeshes in mainstream culture and discourse. The “lizard alien” or “reptoid” conspiracy, which holds that reptile aliens are taking human form to influence global politics and altering humanity with their genetic code, is a perfect example. The idea of human/alien hybrids or extraterrestrial lizard men with extensive powers has been part of western pop culture for a century. It’s also been intertwined with antisemitism for decades.

But even though it’s a distinctly old theory, it’s been embraced now by social media influencers on TikTok. And many are pushing it without being aware of its vile roots.

Variations on the theory have hundreds of millions of views on TikTok. Just videos marked #lizardpeople have over 72 million views. One from “RealHorrorTok” showing Prince Harry and Meghan Markle waving to a crowd with odd expressions on their faces has over a million likes. There are also clips alleging that both President Joe Biden and Vice President Kamala Harris are secretly lizards people in human masks and several claiming Mark Zuckerberg is a reptile alien.

Under #reptoid, there are multiple videos that have millions of views highlighting an interview with conspiracy theorist Randy Cramer who claims to have killed “countless … indigenous reptoids on Mars.” And allegations that Queen Elizabeth, Lady Gaga, Barack Obama, and various entertainers are wearing fake human masks to cover up their lizard form have all gone viral. Videos not specifically about “reptoids” but about other concepts in that realm, such as “starseeds” and reptilian DNA rewriting the human genetic code in the service of Satan, are also popular.

So why is such a distinctly 20th-century conspiracy theory with no supporting evidence and quite a bit of harmful baggage taking off on a site favored by younger content creators?

While most of these videos don’t mention the theory’s link to antisemitism, there is a slew of other videos found using searches like “reptilian jewish” that explicitly make the connection between “reptoids” and Jews. This is partly an effect of how readily conspiracy theories tie back to historical hatred of the Jews, but also an effect of who exactly popularized the reptile people theory in the first place—one of the most prolific and notorious antisemites in conspiracy media.

The idea of reptile aliens that have taken human form to manipulate events on the planet is an offshoot of already existing cultural concepts about lizard men. Lizard men have been a stock trope of science fiction since the Conan the Barbarian novels of Robert E. Howard in the late 1920s and have since appeared in TV, movies, and video games, usually with shapeshifting or mind-controlling powers, bent on world domination or using humans for evil purposes.

They’re a huge part of ancient mythology, as many different cultures have depicted winged serpents, man-snakes, and lizard people as part of their creation myths.

But even with all of the pop culture and pseudoscience depictions of lizard men, it was prolific conspiracy theorist David Icke who first cemented the idea of a powerful lizard/human “Babylonian Brotherhood” pulling the strings on the human race in his 1998 book “The Biggest Secret: The Book That Will Change the World” and greatly expanded on it in the follow-up book “Children of the Matrix.” Taken together, the two books form the core of the modern reptilian theory, a thousand pages of unevidenced claims about the lizard people, their origins, their “war” against grey aliens, and their goal of enslaving humanity.

The basics of Icke’s “biggest secret” are that reptile aliens from the star Sigma Draconis came to our world in ancient times to interbreed with humans, spawning dozens of royal bloodlines as reptilian DNA slowly took over human genetics. These hybrids now make up virtually every powerful dynasty, most wealthy families like the Rothschilds and Bushes, musicians, bankers, scientists, and nearly three dozen presidents. They are said to control unimaginable wealth, power, and military might, using humans as food sources, slaves, soldiers, and experimental subjects for their various medical horrors.

“They’re feeding off humanity,” Icke told VICE in 2012. “They’re turning humanity into a slave race. They demand human sacrifice—that’s where Satanism comes in. They feed off human energy. They feed off the energy of children.”

Icke’s reptilians have since been embraced by legions of conspiracy theorists and authors, often combining them with other conspiracy theories about underground bases, the Illuminati, the secret space program, and QAnon. Reptoid beliefs have also powered a slew of crimes, including the bomber who blew up his RV in Nashville on Christmas Day 2019, and the QAnon believer who murdered his brother

Naturally, most of these conspiracy theories made it to TikTok as well, with videos trying to find the “real” cause of the Nashville RV explosion, secret operations on the moon, and “signs you’ve been marked by grey aliens” all racking up hundreds of thousands of views. All of it shows how easy it is for TikTok videos to spread conspiracy theories to people who have never heard of them, something that’s even more troubling when dealing with a theory that’s as explicitly antisemitic as the reptilian elite theory can be.

Openly Jewish TikTok creators have struggled with the popularity of a theory that seems like a joke, but is actually deeply enmeshed with classic anti-Jewish tropes.

“It may start as a joke about lizards in many people’s eyes, but conspiracy theories are too often a pipeline that starts as a joke,” TikTok creator Zara told the Daily Dot. “Then [they] lead to things like blood libel and Holocaust denial, and when Jewish people try to educate on the harm this causes, we are often shut down and told we are exaggerating our marginalization and cannot take a joke, when in truth, conspiracies like this cause real physical danger to us.”

Icke himself claims not to be antisemitic, and told journalist Jon Ronson that the reptoid conspiracy “is not a plot on the world by Jewish people.” But Icke has also embraced Holocaust denial, endorsed expressly antisemitic theories, and in his book “The Truth Shall Set You Free,” wrote “I strongly believe that a small Jewish clique which has contempt for the mass of Jewish people worked with non-Jews to create the First World War, the Russian Revolution, and the Second World War.”

Looking at Icke’s version of reptoids, it’s easy to see them as an otherworldly representation of the supposed financial and political control that Jews have exerted over Christian society since the Middle Ages.

Like Jews, Icke’s reptoids have come from somewhere else in vast hordes to assimilate with our genetic purity and ultimately take control of those they deem inferior.

His descriptions of the lizard elite as shape-shifting, blood-drinking, power-hungry aliens match up with classically antisemitic descriptions of Jews. And like many other antisemitic conspiracy theories, the reptilian elite has been extremely lucrative for its creator. “The Biggest Secret” has been reprinted six times since its publication and Icke has lectured all over the world, promoting dozens of books and videos.

Since TikTok has become a hotbed of conspiracy theories in general, it’s not surprising that the reptoid theory took off there, with videos embracing it going viral. Given these videos rarely touch on the antisemitic aspects of Icke’s theory, they can be seen more as a reaction to pressing social issues like the pandemic, climate change, and the hoarding of money and resources by billionaires than a concerted effort to perpetuate anti-Jewish tropes.

“The young people who make up TikTok’s largest demographic feel powerless and disenfranchised in society at large,” said Richards. “When people feel especially anxious about the state of the world, conspiracy theories are going to increase in prevalence to meet their psychological and emotional needs. If you’re a young person, coming of age in a pandemic, feeling like climate change gets worse with each year of your life, and you’re constantly surrounded by an onslaught of bad news on a global scale, it makes sense your brain will be attracted to escapist conspiracy theories that scapegoat these problems.”

While the majority of TikTok creators making reptoid videos probably don’t consider themselves antisemitic, the easy embrace of the lizard alien trope is still troubling. As conspiracy theories infect every aspect of western politics, culture, and medicine, Icke’s vision of a reptile/human elite controlling the world continues to serve as an easy entry point to a wide range of other hoaxes and hate.

Sure enough, many of the creators who have made lizard videos have also made videos on other conspiracy theories—many of which are also historically antisemitic.

The danger is that these videos, while mostly innocuous, could be indoctrinating a new generation of followers, many of whom have no idea who Icke is or the roots of the theory in ancient mythology and pulp science fiction. As Richards puts it, the combination is “a mix of the technological and the sociological which create a perfect storm for the revival of one of our favorite historical scapegoats.”

Ultimately, the reptoid theory is like most other antisemitic tropes—forged by cranks and embraced by people looking for someone to blame for their problems. Whether it’s secret societies, lizard aliens, or secret societies made up of lizard aliens; they’re all variations on the same theme: the Jews did it.