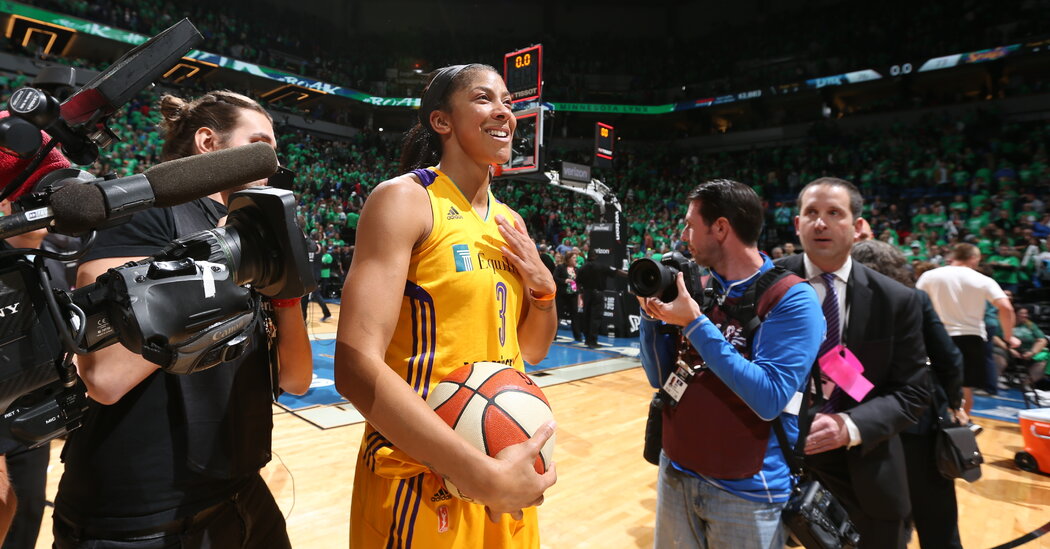 Candace Parker’s storied tenure with the Los Angeles Sparks is over. On Monday, she signed a two-year deal with the Chicago Sky, one of the most shocking decisions ever in W.N.B.A. free agency. Parker, who was drafted No. 1 over all by the Sparks in 2008, is headed back home, not far from where she grew up in Naperville, Ill.

Parker’s move is seismic for its basketball implications. She won the Defensive Player of the Year Award in 2020 and will now play for a team stacked with Courtney Vandersloot, Allie Quigley and Diamond DeShields. But for longtime fans of the W.N.B.A., her departure marks the end of one of the most impressive runs any player has ever had.

Few phenoms like Parker, who entered the league awash in astronomical hype, ever live up to their potential. For her, it took 38 minutes. In her W.N.B.A. debut, against Cappie Pondexter and Diana Taurasi’s Phoenix Mercury, she scored 34 points, sinking 12 of 19 field goals, and had 12 rebounds, 8 assists, 2 steals and 1 block. No rookie has ever scored more in a debut. The 6-foot-4 point-forward even outshined two star teammates — the Hall of Famer Lisa Leslie and DeLisha Milton-Jones, a two-time Olympic gold medalist — in the Sparks’ win.

“Man, Candace was ballin’,” Milton-Jones said recently. “She was hoopin’ and, you know, we saw things in practice. I saw her in college. And when we got her there in training camp and practicing everything, we were like, ‘OK, this kid’s special.’”

Opponents waiting for Parker to hit a rookie wall are still waiting. The coups kept coming from the league’s do-it-all forward, who finished her first season averaging 18.5 points per game on 52.3 percent shooting from the field, 9.5 rebounds, 3.4 assists, 2.3 blocks and 1.3 steals per game. She became the league’s only player ever to win the awards for rookie of the year and most valuable player in the same season.

Parker’s transition from the nation’s most popular college basketball player at Tennessee to L.A. superstar was seamless. The stars aligned when the Sparks, one of the most successful franchises in one of the W.N.B.A.’s biggest markets, won the draft lottery for the No. 1 pick in 2008. With Leslie, a career Spark with three M.V.P. awards and two championships, creeping toward retirement, the keys were ready to be handed off.

Parker shared the floor with Leslie for two seasons, and ever since, the Sparks have been her team. In 13 seasons, she made the playoffs 12 times, was named to five All-Star teams, earned six All-W.N.B.A. first-team honors, won two M.V.P. awards, and in 2016 won her first championship.

“I think that the league should definitely be talking with the Sparks franchise to immortalize Candace in front of the Staples Center regardless of where she ends her career, because she was just that huge,” Milton-Jones said. “Candace should be the freakin’ emblem, you know, for the W.N.B.A. because, man, her being born when she was born to enter the league when she did — it was monumental.”

Basketball will forever remember the four heartbreaking words Parker spoke after her teammate Nneka Ogwumike hit the game-winning bucket in Game 5 of the 2016 finals against the Minnesota Lynx. “This is for Pat,” Parker said through tears during the celebration, referring to Pat Summitt, the legendary Tennessee coach who had died less than four months earlier.

When Parker retires, her reel of greatest on-court moments will include many against the Minnesota Lynx from their yearslong rivalry with the Sparks. The 2016 and 2017 finals between the teams starred four future and current M.V.P.s — Los Angeles’s Parker and Ogwumike, and Minnesota’s Maya Moore and Sylvia Fowles. And it was far more than just a W.N.B.A. squabble: It was perfect league-to-league synergy, pitting Parker’s Volunteers fan base against Moore’s UConn Huskies’ fans as well.

Those series moved the W.N.B.A. forward in more ways than one. Game 5 in 2017 was the most-watched finals game since 2003. Parker cemented her legacy by winning her first championship and the finals M.V.P. award in 2016. With the pressure at its highest, she had a double-double to close out Game 5, scoring 28 points with 12 rebounds.

Parker’s basketball lore is only part of what made her time with the Sparks special. Last season, Parker balanced raising her daughter, Lailaa, while inside the league’s bubble at IMG Academy in Bradenton, Fla.,; leading the Sparks on the court; and broadcasting N.B.A. games for TNT and NBA TV. In the midst of one of her best seasons ever, at age 34, Parker devoted nights off from playing to talking about basketball on national TV.

“I think it just talks about her work ethic,” said Ticha Penicheiro, a former teammate. “And sometimes I wonder, does she have 24 hours in one day? Or does she have more? She bought some extra hours on Amazon or something? Because how can she do all of that? You know, and to be able to do everything so well.”

Every team wants to find its Candace Parker. Her game was so ahead of its time: Look closely and you can see traces of her fast-paced flare in the league’s newest crop of positionless forwards, such as Breanna Stewart, Jonquel Jones, Napheesa Collier and A’ja Wilson.

Parker’s story is still being written. If the 40-year-old Sue Bird and the 38-year-old Diana Taurasi are any indication, she could have half a decade or longer to play. And Parker just might be the missing piece that helps earn the Sky — a team accustomed to losing its top-tier talent — their first-ever championship.

A second ring would put Parker in another echelon of basketball winners. But that doesn’t mean she has anything left to prove. At this point, she is playing for herself.

“I mean, as long as she’s playing, yes, that’s going to be important,” Milton-Jones said. “But if she finishes her career with just one, hell, her body of work speaks for itself. It speaks for itself. At least she won’t be Charles Barkley.”

Even if great moments might be ahead for Parker, Los Angeles will be the city where her professional career was made. The Sparks franchise has a lot of thinking to do without her, though she is still attached to the area as a part-owner of L.A.’s Angel City F.C., a planned National Women’s Soccer League expansion team, along with her daughter.

For now, it’s time for Parker, a three-time Ms. Basketball of Illinois, to come home.