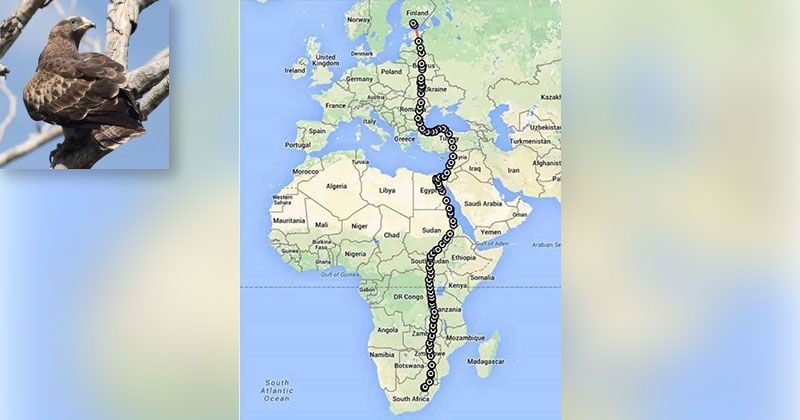 A European honey buzzard (Pernis apivorus) was outfitted with a satellite tracking system, and its remarkable 10,000 km journey was mapped from Reitz, South Africa to Finland.

According to the South Wiltshire Local Group:

She left Reitz in SA to start heading north on 20 April and on 2 June she finally reached Finland where she will probably spend the boreal summer before probably returning again this autumn to South Africa.

It is incredible how she took a straight line north except for when she flew along the seaward edge of Sudan or had to fly over water. Apparently she turned right at the source of the Nile and followed it. It is fascinating that after that deviation she returned to the same longitudinal line she started on and continued until she reached her destination. [source

That’s an average of roughly 240 km a day! An astonishing feat for any animal. Being a long-distance migrant, the honey buzzard relies on magnetic orientation to find its way south, as well as a visual memory of remarkable geographical features such as mountain ranges and rivers, along the way. It avoids large expanses of water over which it cannot soar. [source]