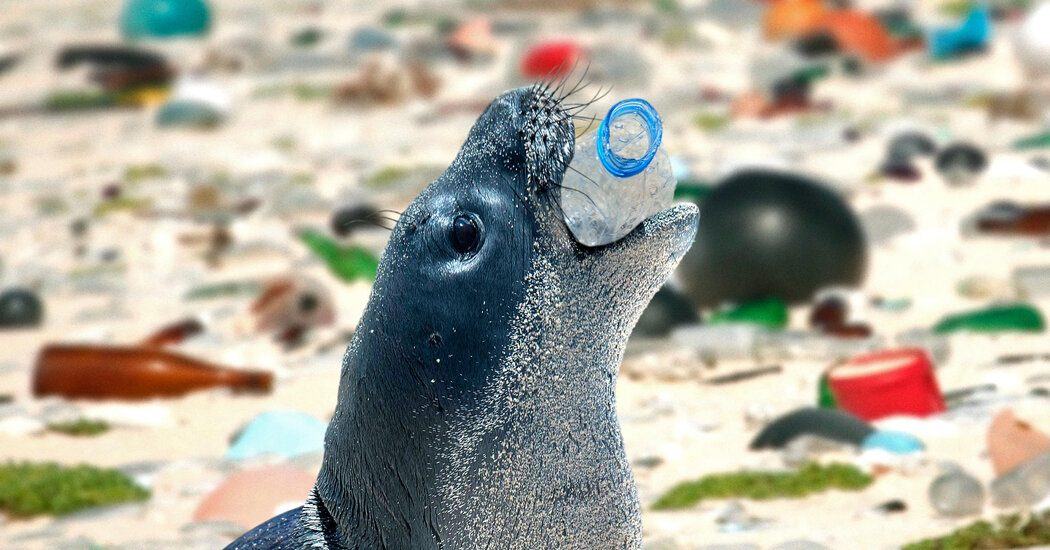 How severely the world’s plastic waste crisis is affecting marine wildlife is not fully understood, despite decades of research and gruesome images of whales’ bellies filled with plastic and a turtle with a straw lodged in its nostril. A new report by Oceana, a conservation group, illustrates some of what we know about how plastic affects sea turtles and marine mammals in United States waters.

The findings offer a glimpse of a larger problem.

The authors focused on sea turtles and marine mammals for practical reasons. These animals are federally protected, so when they are found in distress or wash up dead on a beach, responders are required to document it. By collecting data from government agencies and marine life organizations around the country, the authors found almost 1,800 cases of plastic entanglement or ingestion affecting 40 species since 2009.

But the report notes that the number is “a gross underestimate” because humans observe a tiny fraction of animal deaths in the ocean. Even so, of the nation’s 23 coastal states, it found cases in 21.

“This is the first time we’re looking at the problem from a U.S. perspective,” said Kimberly Warner, the report’s author and a senior scientist at Oceana. “This brings the problem home.”

In 2016, the United States produced more plastic waste than any other nation, and more of that plastic entered the ocean than previously thought, according to a recent study. As of 2015, less than a tenth of the world’s cumulative plastic waste had been recycled.

The Oceana report found that in the reported cases, 90 percent of the animals had swallowed plastic, and the rest were entangled in it. Necropsies often showed that the animals had died from blockages or lacerations. Other times, ingesting plastic may have simply weakened the animal or played no role in its death. Overall, in 82 percent of the cases, the animals died.

The culprits go beyond the usual suspects.

In the 1980s, environmental activists warned of the devastating effects of six-pack rings ensnaring sea animals. People started dutifully cutting them before disposal, and in 1994 the Environmental Protection Agency mandated that six-pack rings must be degradable, though the process may take months. Consumers have also been warned about releasing balloons, which can harm marine animals.

Recently some municipalities, counties and states have banned single-use plastic bags, one of the biggest contributors to ingestion and entanglements, according to the report. Plastic packing straps were found constricting the necks or bodies of seals and sea lions, naturally curious animals who may have gotten entangled while trying to play. Manatees ingested lots of fishing line.

But the report also found many more surprising items caused harm. Along the Gulf Coast, mesh produce bags were found in the guts of sea turtles and also entangling their bodies. In 2015, a loggerhead turtle in Georgia was found with a toothbrush and fork in its digestive tract, among other items. Two years later, another turtle was found in New York with a plastic dental flosser inside it. Food wrappers, sandwich bags, sponges, and even decorative plastic Easter grass were among the items discovered. A bottlenose dolphin in North Carolina had its head stuck in the hole of a flying disc. In Virginia, a DVD case lacerated the stomach of a sei whale.

Many of the victims are endangered or threatened.

More than a dozen species at risk of extinction — including sea turtles, Hawaiian monk seals and sei whales — ingested or were tangled in plastic. Manatees, those gentle, slow-moving giants that graze on seagrass, made up 700 cases. The report quotes Brandon Bassett, a biologist at the Florida Fish and Wildlife Conservation Commission, describing part of what he found inside one dead manatee: “Imagine a ball of plastic bags in the stomach, about the size of a cantaloupe, and then a bunch of plastic bags that were wrapped and almost like a rope that was about 3 feet long.”

Scientists are learning more about why animals consume plastic. To sea turtles, a floating plastic bag may resemble a jellyfish meal, but that doesn’t explain the bottle caps and hard plastic shards found in their digestive tracts or stool. One study suggested that plastic starts to smell appetizing as it becomes coated in algae and microorganisms.

In South Carolina, one ailing loggerhead passed almost 60 pieces of plastic through its digestive system during its rehabilitation at a sea turtle center. Juveniles are more at risk because of their size and undeveloped gastrointestinal tract. More than 20 percent of the sea turtles that had ingested plastic were just months old. Some were only a few days old. A recent Australian study found that just 14 pieces of plastic in their digestive tracts significantly increased sea turtles’ risk of death.

Still, plastic waste is not the biggest killer of marine life.

“Plastic in and of itself may not be as big of a threat as we’re led to believe,” said Jesse Senko, an assistant research professor and senior sustainability scientist at Arizona State University. “The scientific community has not done a good enough job of really assessing these questions, looking beyond how it affects an individual animal.”

He believes that images of decomposing sea birds with bellies full of plastic lead the public and media to focus on plastic even when other threats are more significant.

Ultimately, plastics and rising sea temperatures are connected; after all, the vast majority of plastic is derived from fossil fuels.

The Oceana report calls on national, state and local governments to restrict the production of single-use plastics and it asks companies to offer consumers plastic-free options.

“I’m old enough to remember a time when it didn’t permeate everything in my life,” Dr. Warner said. “And yet it’s built up at an alarming rate.”