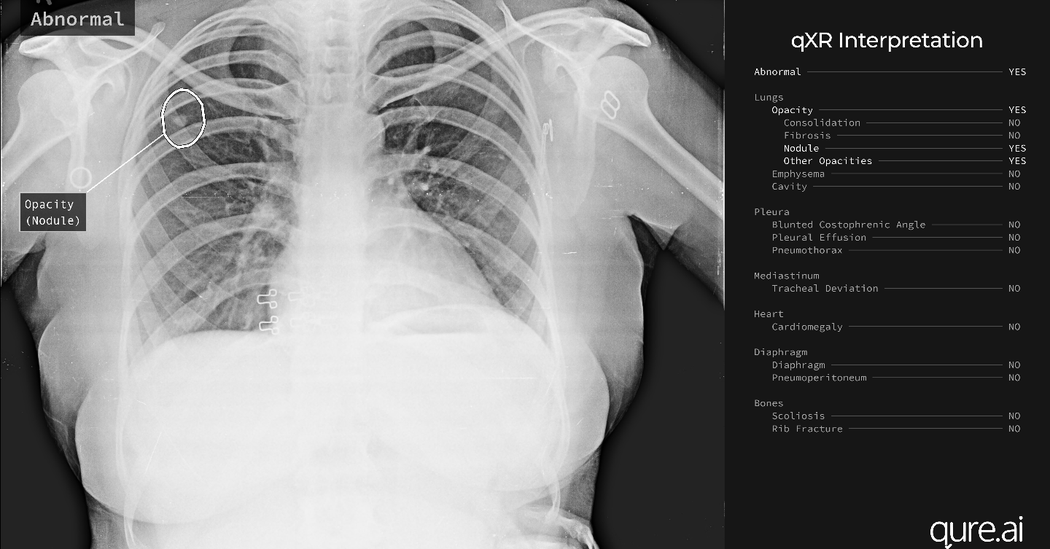 In some of the most remote and impoverished corners of the world, where respiratory illnesses abound and trained medical professionals fear to tread, diagnosis is increasingly powered by artificial intelligence and the internet.

In less than a minute, a new app on a phone or a computer can scan an X-ray for signs of tuberculosis, Covid-19 and 27 other conditions.

TB, the most deadly infectious disease in the world, claimed nearly 1.4 million lives last year. The app, called qXR, is one of many A.I.-based tools that have emerged over the past few years for screening and diagnosing TB.

The tools offer hope of flagging the disease early and cutting the cost of unnecessary lab tests. Used at large scale, they may also spot emerging clusters of disease.

“Among all of the applications of A.I., I think digitally interpreting an image using an algorithm instead of a human radiologist is probably furthest along,” said Madhukar Pai, the director of the McGill International TB Center in Montreal.

Artificial intelligence cannot replace clinicians, Dr. Pai and other experts cautioned. But the combination of A.I. and clinical expertise is proving to be powerful.

“The machine plus clinician is better than the clinician, and it’s also better than machine alone,” said Dr. Eric Topol, the director of the Scripps Research Translational Institute in San Diego and the author of a book on the use of A.I. in medicine.

In India, where roughly one-quarter of the world’s TB cases occur, an app that can flag the disease in remote locations is urgently needed.

The Chinchpada Christian Hospital in Nandurbar, a small town in northwest India, serves members of the Bhil tribal community, some of whom travel up to 125 miles to visit the center. The 50-bed hospital has eight doctors, and only the most rudimentary medical equipment.

Clear across the country, Simdega, one of the 20 poorest districts in India, is isolated from the nearest town, Rourkela, by nearly five hours of travel on bumpy roads. The tribal population in the district lives in tiny hamlets surrounded by dense, evergreen forest. Simdega’s medical center, which has 60 beds and three doctors, is in a clearing of the forest — “literally in the middle of nowhere,” said Dr. George Mathew, the director.

The meager staff has to manage everything that comes its way, “from malaria to myocardial infarcts to convulsions to head injuries,” Dr. Mathew said. Over the years he has taught himself to read X-rays, and when he is stumped he appeals to the radiologists among his far-flung friends and former colleagues.

Though Nandurbar and Simdega are separated by more than 800 miles, their populations are startlingly similar. Malaria, sickle cell disease and TB run rampant among them, compounded by poverty, reliance on spiritual healers and alcoholism — even among the children.

“TB tends to get neglected and diagnosis is delayed often,” said Dr. Ashita Singh, the chief of medicine at the Nandurbar hospital. By the time people arrive at these medical centers, they often “are very, very ill and have never even been evaluated anywhere else,” she said.

But in some patients, the X-rays carry signs that are too subtle for a nonexpert to detect. “It’s in that group of patients where A.I. tech can be of great benefit,” Dr. Singh said.

The arrival of the coronavirus — and the lockdown that followed — cut off these remote hospitals from the nearest towns, and from radiologists, too. It also further delayed and complicated TB diagnoses because both diseases affect the lungs.

A few months ago, both hospitals began using qXR, an app made by the Indian company Qure.ai and subsidized by the Indian government. The app allows the user to scan an X-ray. If it finds evidence of TB, it assigns the patient a risk score. Doctors can then perform confirmatory tests on patients with the highest risk.

At the hospital in Nandurbar, the app helped diagnose TB in 20 patients in October, Dr. Singh said.

Apps like qXR may also be useful in places with a low prevalence of TB, and for routine screening of people with H.I.V., who are at high risk of contracting TB, as well as for those who have other conditions, experts said.

“Most chest X-rays for people who are suspected of having tuberculosis are read by people who are not remotely expert at interpreting them,” said Dr. Richard E. Chaisson, a TB expert at Johns Hopkins University. “If there were an A.I. package that could read the X-rays and the CT scans for you in some remote emergency room, that would be a huge, huge advance.”

qXR is among the more promising of the A.I.-based apps for detecting TB. The company that made the app didn’t realize that potential until a doctor at an Indian hospital suggested it a few years ago.

In studies comparing different A.I. applications that were conducted by the Stop TB Partnership, all of the A.I. apps outperformed experienced human readers, and qXR seemed to fare best.

The app identifies TB with an accuracy of 95 percent, according to Qure.ai’s chief executive, Prashant Warier. But that level of precision is not based on real-world conditions, which Dr. Topol called “a common problem” with A.I.-based apps. A TB program may be less precise in the United States or Western Europe than in India, because the prevalence of the disease is lower in those places, Dr. Topol added.

The app has only been tested in adults, but it is now being used in children 6 and above. Chest X-rays are particularly useful for pediatric TB because about 70 percent of the cases in children cannot be confirmed by lab tests, said Dr. Silvia S. Chiang, an expert in pediatric TB at Brown University.

“There is a huge shortage of trained professionals who feel comfortable interpreting pediatric chest X-rays,” she said, “so developing and validating computer-assisted X-ray reading technologies in children would greatly help.”

Qure.ai said that it was testing its app in children in Bangladesh, and that it would publish the data early next year. In the meantime, qXR and other apps will keep improving because they learn as they go.

“The more X-rays you feed the beast, the better it gets,” Dr. Pai said.

The experts were optimistic over all that A.I.-based apps could make an enormous impact on the control of TB, especially in countries like India that lack medical resources.

“I’m just dreaming of a time when something like this would be available to all the little primary and secondary health care centers in the government sector who hesitate to do X-rays because they don’t have the confidence to read them,” Dr. Singh said. “If this was to be made available to every X-ray center in rural India, I think we could beat TB.”