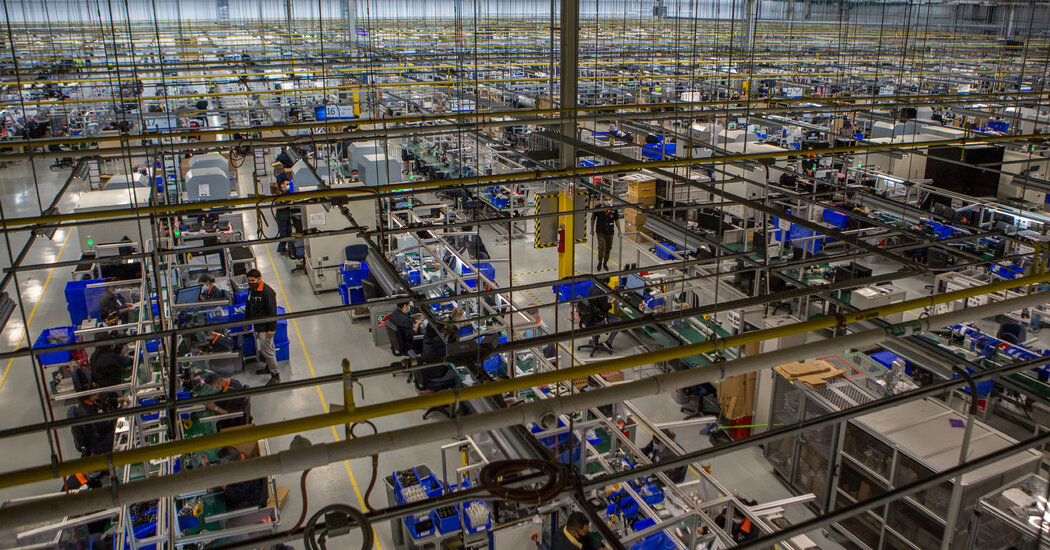 MEXICO CITY — Biden administration officials on Monday touted the benefits that a coming wave of investment in American manufacturing could have for Mexico, saying that new factories making semiconductors, clean cars and other products in the United States could look to Mexico for raw materials and assembly.

In meetings with President Andrés Manuel López Obrador and other high-ranking Mexican officials on the economic relationship, Secretary of State Antony J. Blinken and Commerce Secretary Gina Raimondo discussed how the countries could together capitalize on newly passed legislation that will direct tens of billions of dollars of new investments toward U.S. facilities in the semiconductor and green technology industries in the coming years.

Economists say that Mexico is missing out on billions of dollars of potential foreign investment as companies look to diversify their operations beyond China and East Asia over supply chain problems spurred by the pandemic.

But the nationalist policies of Mexico’s president have spooked investors, economists say, and foreign investment levels have yet to return to prepandemic levels at a time when foreign companies — particularly American — are looking for near-shoring opportunities like Mexico to relocate their factories closer to home.

U.S. officials pointed to the deep integration of the countries’ auto industries as a platform for manufacturing clean cars. Ms. Raimondo said that, with semiconductors, the opportunity for Mexico would be in testing, packaging and assembly, which she said was a $60 billion industry in China and Taiwan, but only $3 billion in North America.

“This is a big door opening for Mexico, for the Mexican economy,” Marcelo Ebrard, Mexico’s secretary of foreign affairs, said in translated remarks.

Yet, even as leaders from both countries expressed optimism about their future partnership, an ongoing trade dispute over the Mexican government’s interventions in the energy market continues to cast some doubts over Mexico’s reliability as a destination for foreign investment.

Mr. López Obrador has tried to strengthen the dominance of Mexico’s state-owned energy companies in what he describes as a push for energy sovereignty. But some U.S. energy companies have complained about the less favorable treatment they face on issues like pricing, emissions standards and contract terms.

The United States has challenged Mexico on their behalf, taking initial steps toward bringing a trade dispute under the countries’ free trade agreement. The action could ultimately result in the United States imposing tariffs on Mexico if the issue is not otherwise resolved.

Still, in remarks on Tuesday, Mr. López Obrador was optimistic about the discussions, saying the United States had adopted a more respectful approach.

“I was very struck by the proactive, friendly attitude of the secretary of commerce,” who said “nothing about punishing Mexico for its energy policy,” Mr. López Obrador said during a news conference. “The word ‘tariff’ or ‘sanction’ wasn’t even used.”

Officials from both sides said Monday that the dispute was being handled under that formal process. But Tatiana Clouthier, the Mexican secretary of economy, said in a news conference that the topic was discussed on Monday afternoon as part of a two-hour conversation between the Mexican president and his American visitors.

Ms. Raimondo said the two sides didn’t discuss the energy conflict “extensively,” but added, “What businesses are seeking is predictability, fairness and transparency. And I think that that is true of every business everywhere in the world.”

The remarks followed a day of high-level meetings at the National Palace and economic ministry in Mexico City that also touched on cybersecurity, regional competitiveness, efforts to address climate change and supply chain resilience in areas like pharmaceuticals, among other issues.

But the excitement of the meeting centered around the opportunities that will arise as Biden officials disburse billions of dollars in the coming months to try to revitalize American manufacturing.

The CHIPS Act, which devotes $50 billion to semiconductor manufacturing and research, and the Inflation Reduction Act, which offers $369 billion of incentives to mitigate climate change, are aimed at stimulating U.S. domestic investment.

But both have provisions that could benefit Mexico, including funding for the United States to work with partner countries to make the semiconductor supply chains more secure, and incentives for consumers to purchase clean cars with parts made in countries with which the United States has a trade agreement, such as Mexico.

While Democrats and Republicans have protested U.S. jobs being sent to Mexico, many economists have argued that the country’s economy is complementary to that of the United States, given its large pool of lower-wage workers that can do more labor-intensive jobs that aren’t economical in the higher-wage United States.

One argument in favor of a closer U.S.-Mexico partnership is that it would allow North America to produce better quality and lower cost products that could better compete on the international market with products made in China.

The United States and Mexico have a vibrant trade in the raw materials and inputs that go into a variety of products, and many companies have designed their supply chains to run back and forth between the countries, taking advantage of natural resources, worker skills or favorable government policies.

Still, the economic partnership between the two countries has not always been as smooth as some have hoped. At the onset of the pandemic, American automakers protested Mexico’s shutdowns of its auto parts factories. Mexican cartels have also expanded their reach, muscling into licit trades for limes and avocados.

The spat over energy has added to tensions, and some businesses have found it easier to continue importing products and parts from Asia, despite the greater distance.

Officials have not given any timeline for when the energy dispute might be resolved. In July, the Biden administration said it believed Mexico’s actions violated the terms of the United States-Mexico-Canada Agreement, which went into effect two years ago and bars its members from discriminating against each others’ businesses. Canada subsequently joined the United States in saying that Mexico’s actions violated the agreement.

If the dispute is not resolved by early October, the United States, under the trade agreement, is allowed to request a panel of trade and legal experts to examine the issue. And if the panel rules in favor of the United States, American officials say they could impose tariffs on Mexico, though their goal is to resolve the dispute before that point.