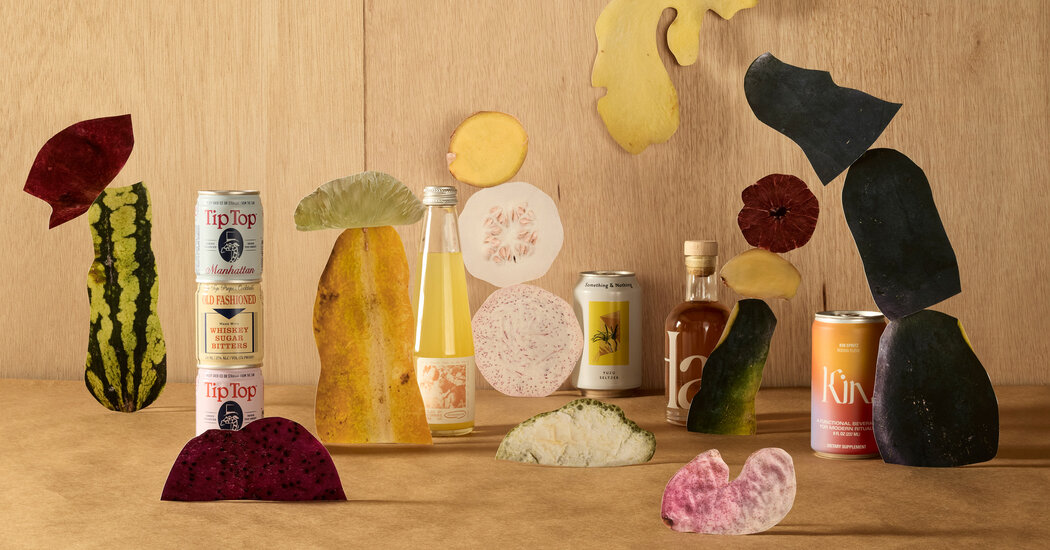 But reports of the death of the boozy cocktail may be exaggerated. The family-run, California-based boutique aperitif company Haus, which also bottles its drinks rather than canning them, has grown rapidly since launching in 2019. Its range blends fruit wine with everything from star anise, cloves, lavender and citrus to cinnamon, strawberry and elderflower. Flavoring wine in this way might have the vignerons of Burgundy rolling their eyes, but it produces a drink versatile enough to be consumed neat or in mixed drinks. Best of all, the relatively low alcohol by volume (ABV) means you can make your way through more of the stuff without falling off your stool or alienating your party guests. At 8 percent, the McBride Sisters range of canned California-made rosé spritzers has a similar quality.

Zuzu, an alcoholic “sparkling cocktail,” launched in 2019 by old friends Ali Schmidt and Greta Caruso, prides itself on a philosophy of “less is more delicious.” The pair’s original calamansi lime flavor includes just five ingredients: lime juice, agave spirit, agave syrup, sparkling water and a dash of salt. And as with most of these new drinks, which speak to customers raised on a doctrine of “Coke is bad,” care has been taken to avoid excessive sweetness. It has a summery, citrusy flavor. Where Zuzu’s branding and simple glass bottles are deliberately low-key, the packaging of the canned Onda is loud, emblazoned with bright surfing-inspired lettering. The drink consists of a mix of tequila, sparkling water and fruit juice — either lime, grapefruit, watermelon or blood orange — and, with just 5 percent ABV and no more than 100 calories per can, seems targeted at the younger day drinker. (One of Onda’s co-founders is the actress Shay Mitchell, a star of the teen drama “Pretty Little Liars.”)

The Atlanta-based brand Tip Top, another purveyor of alcoholic options, looked further back for inspiration for its premade cocktails. Meant to be drunk straight or poured over ice, they come in charmingly dinky 100 milliliter cans printed with a logo of a monocled giraffe and fonts that echo Prohibition-era posters. They also have throwback ABVs of up to 40 percent. While the margarita lacks some of the life zest of fresh lime, the classic Manhattan, old fashioned and Negroni are all

Advertisement
a treat, with a welcome bitterness and unapologetically strong liquors. “We felt there wasn’t the simple baseline satisfaction for cocktails that are familiar,” says co-founder Neal Cohen, who launched the company in 2018 with his childhood friend Yoni Reisman. “The discerning drinker, who generally steers clear of canned cocktails, understands we are coming from a different place.”
Advertisement

On the one hand, this new wave of portioned drinks is a logical, enjoyable extension of other prevailing trends. The beverages cater to generations whose members are more fastidious about what they put in their bodies, even if it’s in search of a buzz. The transition away from plastic packaging makes aluminum more persuasive, even if its recycling credentials also deserve scrutiny. And the pandemic has boosted the appeal of drinks that are easy to consume alfresco. But with every new can or small bottle comes, too, the implication that we are increasingly more wary of communal drinking, less willing to split a bottle, as it were. With their carefully calibrated mixes of adaptogens or craft liquors, these offerings align with a consumerist fantasy that even our pre-dinner drink might be tailored exactly to our preferences and ours alone. There’s something antisocial, maybe even faintly lonely, about that. After all, if there’s one thing McCarthy’s bleak but redemptive novel and Coca-Cola’s marketing have agreed on, it’s that while a can of Coke might be delicious and transporting, the act of sharing it is more precious.