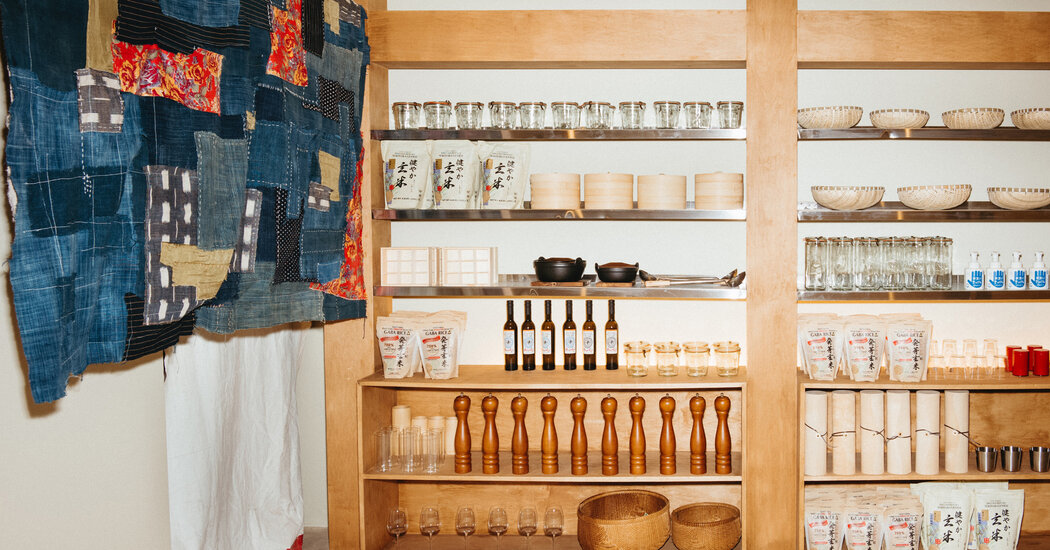 Welcome to the T List, a newsletter from the editors of T Magazine. Each week, we share things we’re eating, wearing, listening to or coveting now. Sign up here to find us in your inbox every Wednesday. And you can always reach us at [email protected].

Friday will see the opening of a new kind of general store in downtown New York, one informed by nostalgia and empathy as much as function. The fashion stylist Beverly Nguyen’s first foray into retail, the two-month pop-up shop Beverly’s NYC, will offer a tightly edited, affordable selection of household essentials — including the perfect martini glass, pepper mill and cast-iron pan, as well as olive oil she produced in collaboration with a family-owned company in Santa Ynez, Calif. — in a Chinatown space that conjures the same feelings of warmth and intimacy as the dinner parties that, before the pandemic, she threw regularly at her Manhattan apartment. The interior was a collaboration between Nguyen and two of her close friends, the architect Louis Rambert, known for his work with the firm Rafael de Cárdenas, and the film producer Kelly McGee (Nguyen’s partner in the project), and features floral wallpaper by the New York-based Superflower Studio, as well as a custom kidney-shaped ceramic cash wrap by Fefo Studio in Brooklyn. But Nguyen’s biggest influence was perhaps her grandmother, who owned a hardware store in Bien Hoa, Vietnam, in the 1960s; it was only after praying to her spirit, when a previous location fell through, that Nguyen secured the venue. Her family is also represented in a line of simple, supersoft towels and table linens that Nguyen developed with her parents, Vietnamese immigrants who began manufacturing apparel after arriving in the States as refugees in the 1980s. She hopes the space, which was previously a Chinese temple, will feel equally welcoming to her Chinese neighbors, many of whom have lived in the neighborhood for decades, and to newcomers to the city looking to make a home here. As she sees it, “the shop is really for anyone who wants to build their own conversation and their own community.” Beverly’s NYC, 22 Ludlow Street, New York, N.Y. 10002, beverlys.world.

For anyone wanting to eat more sustainably and mindfully, the discovery of Pyscis, a gourmet tinned-fish company from Vienna, will be a welcome one. Created by Marwan Saba, the owner of Hans Reh, a local grocer that specializes in fish conserves, and his daughter, Song-I Saba, Pyscis sells seasonal pelagic fish responsibly sourced from Spanish waters and packaged in limited quantities. Its offerings include blue mussels, bullet tuna and two types of sardines, each tinned in a high-quality olive oil specifically chosen to pair well with the fish. “None of the subspecies we use have been overfished,” Song-I explains of the brand’s sustainability efforts. “These fish, like with the bullet tuna, are lesser known in the industry, but they’re actually healthier: Because they’re younger, they don’t accumulate as many toxins.” Each tin comes wrapped in white parchment paper adorned with a drawing of the fish inside and held together by a natural-rubber band. While methods of preserving nonrefrigerated foods have remained largely unchanged since 1809, when Napoleon awarded Nicolas Appert — known as the Father of Canning — 12,000 francs for winning a contest to find the best method of storing rations for his troops, Pyscis’s subtle touches are what make each tin uniquely delicious. On a recent cold night, I rolled back the lids on the sardines, the hand-shucked mussels and the tuna. I made a quick salad, softened some butter and ripped apart some good bread. I wasn’t feeding an army, but as I assembled tartine after tartine, I felt my resolve return — at least for the evening. From about $9, pyscis.com.

An Art Installation That Pays Tribute to Mall Culture

In the folklore of suburban girlhood, the mall persists as a symbol of freedom and fantasy. Or so believes the multimedia artist Maggie Lee, whose latest installation, “Daytime Sparkles,” debuts at Nordstrom this week in partnership with the Whitney Museum’s emerging artists program. Lee, who grew up visiting her mother after school at the New Jersey department store where she worked, describes her time in these spaces as being dominated by pop music, ever-changing displays and shop-specific fragrances. For her installation, she drew on those memories, as well as her own Y2K girl-power style and the 1996 DJ Screw mixtape “Ballin in da Mall,” to create a piece that speaks to teenage self-discovery and independence. Located on the fifth floor of Nordstrom’s New York flagship, on West 57th Street, the work includes two rust-colored couches that frame a low table, within which Lee has stored a range of Nordstrom merchandise, and atop which sit two analog televisions playing D.I.Y.-style commercials that the artist filmed herself. The high white walls that surround the scene are adorned with sparkling shapes, colorful LED-lit windows, “No Loitering” signs and a massive projection of a candelabra dripping in necklaces, while a custom pop song that Lee created in collaboration with the composer and artist Stefan Tcherepnin

Advertisement
plays in the background. Shoppers are meant to engage with the installation — to recline on the sofas, bop their heads to the music — becoming one with the artwork and showcasing precisely what Lee is nostalgic for: a public gathering place, where the younger versions of ourselves can run free. “Daytime Sparkles” will be on view through May 16, 225 West 57th Street, New York, N.Y. 10019.

From Lemaire, a Collection Inspired by a Self-Taught Artist

Born in the Mexican state of Jalisco, the artist Martín Ramírez left for California in 1925 to work on the railroads and in the mines. When the Great Depression hit, Ramírez, who didn’t speak English, found himself without a job or housing, and was picked up by the police and admitted against his will to a state hospital; he was eventually diagnosed with catatonic schizophrenia. He would spend the last 30 years of his life in psychiatric facilities, where he kept to himself but produced a body of drawings that incorporated images of Catholic saints, cowboys and train tracks, as well as complex geometries. Since his death in 1963, he’s been widely recognized as a self-taught master and has been made the subject of various major museum shows. Now, he’s being celebrated by the French fashion label Lemaire, which, having partnered with the artist’s estate, sent cotton-linen, dry silk and cotton voile garments printed with Ramírez’s work down the (virtual) runway last fall. Sarah-Linh Tran, the co-creative director of the house, says that the artist’s tragic story resonates with our time, but it isn’t what she sees first: “What’s striking is that he had the power to transcend isolation and create an intimate topography.” And surely the works’ earthy tones and precise draftsmanship were a natural fit for Lemaire’s aesthetic. The brand honored the latter by eschewing a copy-and-paste approach and instead allowing Ramírez’s vivid line work to inform the silhouette of each piece, as with a shirt with an askew button that seems to create a step for the subjects of “Horse and Rider” (1953), heightening the sense that they are on the move. Tran’s favorite design is a parachute dress emblazoned with a Mexican Madonna. “It’s as though she’s playing hide-and-seek around the wearer’s body,” she says. The capsule collection will launch April 2. From $295, us.lemaire.fr.

Monument Lab, a Philadelphia-based creative studio founded in 2012 by Paul Farber and Ken Lum to facilitate the community’s engagement with public art through exhibitions and research initiatives, recently launched a free augmented reality app: OverTime. Developed in collaboration with the production company Dream Syndicate and supported by the Knight Foundation, the software allows users to embark on free historical tours of the city. The app’s inaugural journey begins on the steps of the Philadelphia Museum of Art and is led by the local poet and activist Ursula Rucker. Scan the ground with your smart device and Rucker appears onscreen, welcoming you to Philadelphia. From there, users choose from three different tour options: There’s the virtual Living Timeline, which moves users from 10,000 years before the Common Era to 2021; City Sightlines, which maps Philadelphia’s development from an early “green country town” to a thriving city; and Statue Stories, which delves into the history of the Rocky Balboa statue and other memorialized figures. Each route enables participants to explore the hidden narratives underfoot, like the fact that the museum’s steps — and part of the building itself — were designed by the African-American architect Julian Abele in the early 20th century, or that before the arrival of William Penn in 1682, the land was inhabited by the Lenape, the Indigenous people of the area. Throughout the tour, Rucker asks users to answer three questions: “What has happened here? What can you see from here? What does this statue mean to you?” Submitted through the app, the responses become, according to Farber and Lum, part of the city’s collective memory. It’s a gesture Rucker herself agrees with: “Should we even call them monuments anymore?” she says of public statues and institutions. “All of our memories matter. We are our own monuments.” Download the app here for iOS. An app for Android users will be available later this year.

In Southampton, a Pool Amid the Dunes