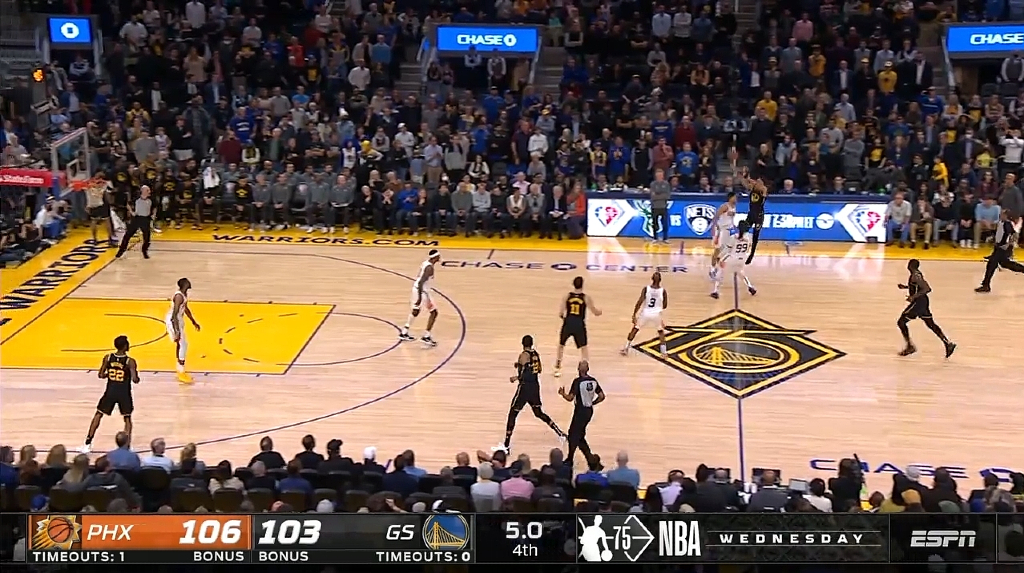 The Phoenix Suns picked up yet another crunchtime victory on Wednesday night in San Francisco, beating the Warriors on the road in a 107-103 thriller.

It was an exceptional game to watch and a potential preview of the Western Conference Finals or Semifinals. Both teams showed why they’re among the league’s best on the defensive end, and the individual offensive star of the night was Warriors guard Jordan Poole, scoring 38 points to go along with nine rebounds and seven assists, as he continues to fill up the stat sheet in Stephen Curry’s absence. Unfortunately for Poole, it was one of the few shots that didn’t go down for him that will be the most memorable of the night, as he got baited into a wild game-tying shot from halfcourt by Devin Booker and the Suns.

After a pair of Chris Paul free throws put Phoenix back up by three, Poole brought the ball up, with Jae Crowder pushing him towards the sideline and Booker stepping up to the halfcourt line with his hands out threatening to foul in order to keep the Warriors from having a shot to tie the game. Poole tried to circumvent that by putting up a halfcourt heave, but didn’t wait quite long enough, as Booker calmly dropped his hands and let the young guard fire a wild shot with five seconds still on the clock.

It was a shot that looked more ridiculous in real time, as the replays show Booker’s great work in baiting Poole into that effort, but it certainly wasn’t the final shot the Warriors would’ve hoped for. It wasn’t terribly far off, which is fairly impressive, but Phoenix was happy to see him fire one up from 42 feet away and calmly pull down the board to ice their 62nd win of the season.

The loss dropped Golden State to fourth in the West by virtue of Dallas owning the tiebreaker with them, which means if things hold as is, it’s possible we get this matchup in the second round, which would immediately become the marquee series in the West.