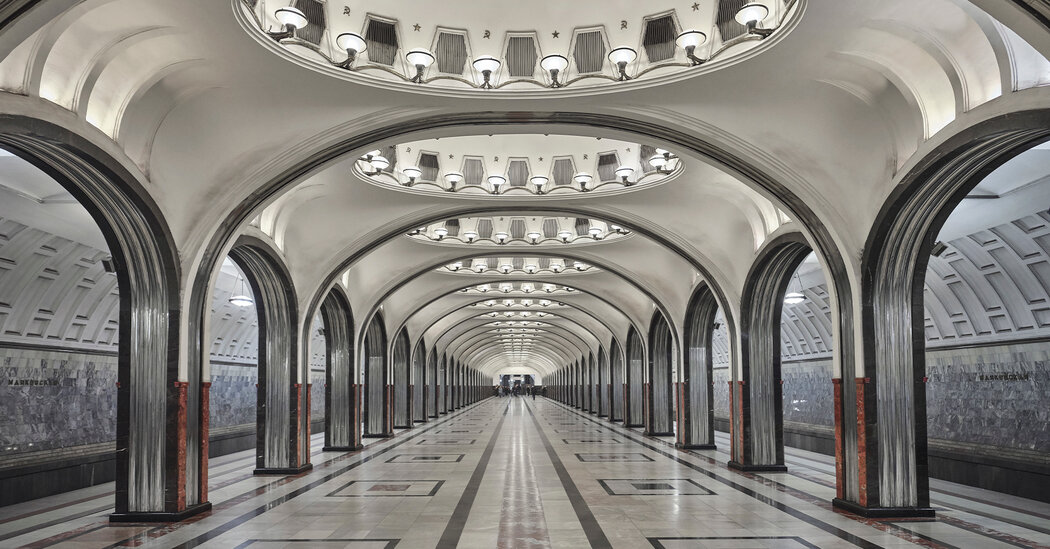 It was a cold day in December 2014, and I was waiting for the train at Shchukinskaya, a station on the Tagansko-Krasnopresnenskaya Line of the Moscow Metro.

Though the subway trains in Moscow are celebrated for their punctuality, this particular train was running late, giving me longer than usual to gaze at the scenery around me.

There, in a utilitarian station not typically celebrated for its beauty, I noticed the uniformly sculpted aluminum panels along the track. Their patterning was mesmerizing. I snapped a few quick photographs.

A moment later, my train arrived. I boarded a car along with the rest of the crowd and departed the station.

My experience at Shchukinskaya was a fleeting and seemingly insignificant event, and yet it launched me on a project that I had been considering for years — one that would occupy more than half a decade of my professional life.

Between 2014 and 2020, I photographed all of the existing Soviet-era metros, ultimately visiting more than 770 stations in 19 cities. My goal was to create as close to a full archive of the metros as I possibly could.

It wasn’t just the individual stations that captured my imagination — though many are undeniably stunning in their own right. Rather, it was the entire underground system, both in Moscow and extending out to other former Soviet cities, that inspired me: the mystique, the immensity, the pervading sense of colossal authority.

I was also drawn to record countless details: lamps, benches, tiles, ornaments, mosaics, staircases, elevators and other handmade artworks of marble or wood.

For a long time the project seemed impossibly daunting. The number of stations felt endless, each full of transecting passengers and decorative features.

The Moscow Metro alone, which opened in 1935 and serves as a propagandistic model of Soviet might, has more than 200 stations and spans hundreds of miles.

Capturing many of the stations devoid of passengers imbued the photographs with a sense of timelessness. But doing so wasn’t easy; it meant that most of these pictures had to be taken either before 6 a.m. or after 11 p.m.

Restrictions on photography, once commonplace in Russia and throughout the former Soviet Union, have changed dramatically, even in the last decade. (Authorities in Tashkent, the capital of Uzbekistan, finally lifted the ban on photography in its metro stations in 2018, for example.)

Still, metro authorities weren’t always pleased with my presence. More than 50 times, inside various stations, I was told that photography was not permitted. Once, in Tashkent, I was forced to hand over my camera’s memory card.

Often the project felt like a game of cat and mouse. At certain moments I felt like a criminal, despite the fact that my only intentions were to capture the stations’ beauty.

Sometimes I came back to a single station again and again, having studied when its attendants or police officers had lunch breaks or shift changes.

There were, however, welcome exceptions. At Elektrozavodskaya, a stop in Moscow, a policeman offered tips on how to capture the station’s most stunning facets. He also gave me the contact information for metro staff who could help adjust the lighting.

After photographing Moscow’s stations, I moved on to St. Petersburg, whose metro — its construction long delayed by the brutal siege of Leningrad — opened in 1955.

From there I began venturing farther afield — to Ukraine, Belarus, Azerbaijan, Georgia, Armenia, Uzbekistan. Eventually I also visited a handful of cities whose metro systems, while not formally attributed to the Soviet Union, were either built or substantially altered during the Soviet era, or even partially built by Soviet architects and engineers. These included the metro stations in Bucharest, Budapest and Prague.

I faced the same question in almost every city I visited: “Why are you photographing here?” people would ask.

Many couldn’t understand why a seemingly tedious project centered on such common spaces would be interesting for me. These stations, after all, were places that most commuters passed through every day — by necessity more than choice.

But sometimes a passer-by, seeing me see a station they’ve seen a thousand times, would notice something anew, something I’d aimed my camera at: a beautiful ceiling, a carved handrail, an ornately decorative lamp. And then, I knew, they understood.

Frank Herfort is a documentary and architectural photographer based in Moscow and Berlin. You can follow his work on Instagram.