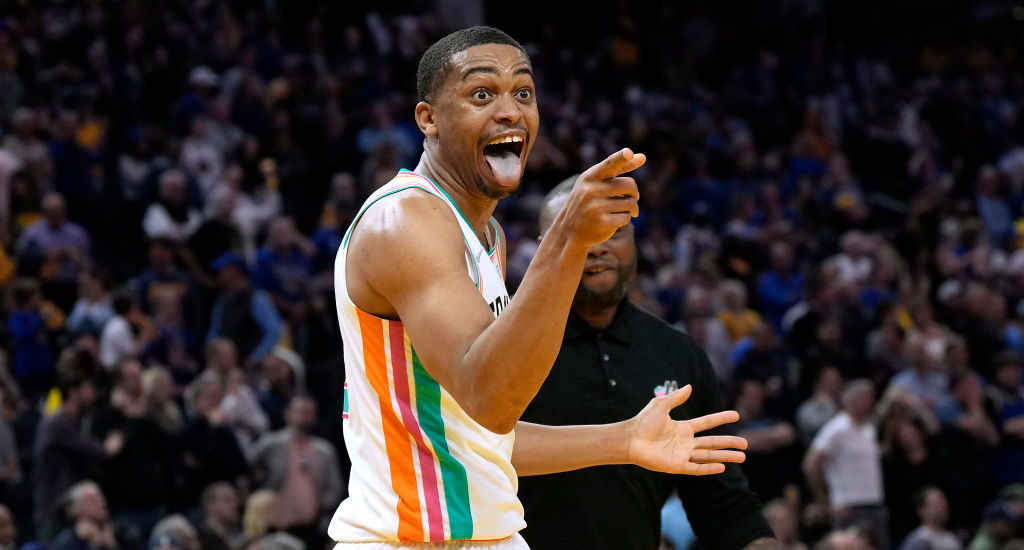 While much of the focus of the basketball world is on the chaos of the NCAA Tournament, the NBA is in the midst of its stretch run, with the play-in tournament bringing some delightful drama to the end of the regular season.

The fight for seeding in both conferences is extremely tight, and on Sunday the Warriors hosted the Spurs in a battle of one team trying to hang on to a top-3 seed and another hoping to claw its way into the play-in. After the Spurs jumped out to a huge first quarter lead, the Warriors steadily reeled them in and took a one-point advantage into the fourth quarter, but quickly fell behind by as many as nine in the fin al period.

Golden State would again rally to tie things up at 107-107, which is when things went a bit haywire at the end. The Warriors missed a pair of go-ahead jumpers, but managed to get an offensive rebound after each and ultimately got fouled, as Andrew Wiggins went to the line with three seconds to play. Wiggins would make the first and miss the second, with Kevon Looney fouling Jakob Poeltl on the rebound effort, sending the Spurs big man to the line with 2.4 seconds to play on the other end.

Andrew Wiggins converted the first free throw to give the Warriors a one-point lead. But, after missing the second, Kevon Looney was called for a loose-ball foul. The rest was history. pic.twitter.com/KZ5WW7msWA

Poeltl would, like Wiggins, split his free throws by making the first and missing the second, which popped off the rim and somehow got tipped into the hands of Keldon Johnson, who threw up a wild hook shot that banked in for the game-winner with 0.3 seconds to play.

KELDON JOHNSON CRASHES THE GLASS FOR THE @spurs WIN! pic.twitter.com/KqEPj6N8I9

With the win, San Antonio pulled to within 2.5 games of the freefalling Lakers for 10th in the West (three back in the loss column) with 10 games to go. While it’s a long shot, it will certainly make things interesting to the end if L.A. continues to struggle as it has and San Antonio can find its way to a few wins to further close that gap. For Golden State, the drops them to just two games up on Utah for the 4-seed, which would earn them a first round series with Luka Doncic and the Mavericks, currently holding down the fifth spot — the 3-seed would face Minnesota as of today, as they are tied with Denver in the standings but hold the tiebreaker.