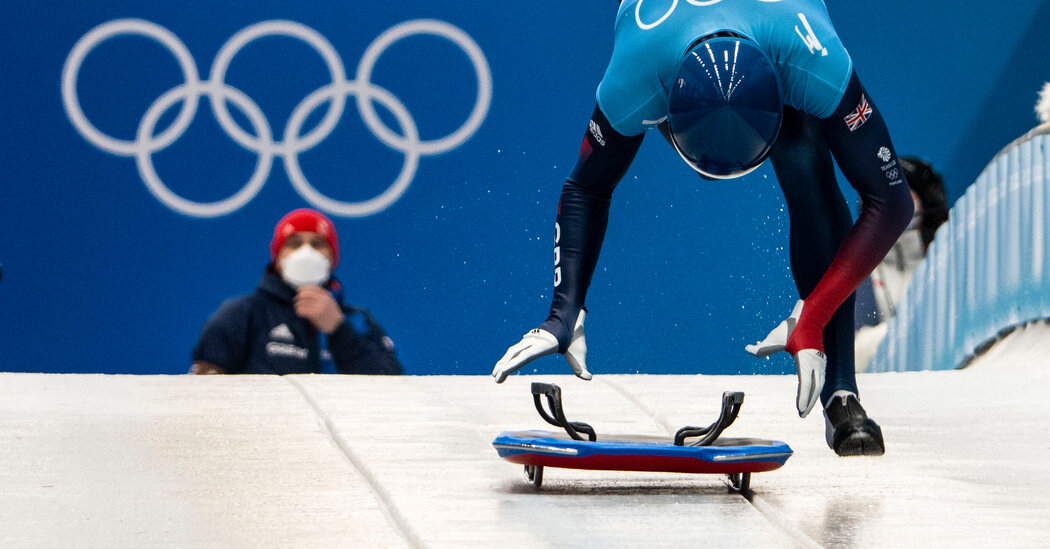 Many Winter Olympic sports have ancient origins, dating to times when humans invented new ways of getting around in the harsh, white wilderness. Skiing may have first emerged 10,000 years ago in Altay, China, and the Indigenous Sámi word for skiing (“čuoigat”) is estimated to be 6,000 to 8,000 years old. Thousands of years ago in Northern Europe, people strapped animal bones to their feet to skate around on ice. And the First Peoples in Canada used toboggans to transport goods.

The sport called skeleton has no such hallowed origins in the practical transport of humans or goods, despite technically taking place on a sled. Life was hard enough without central heating; there was no reason to hurdle face-first down a frozen chute on a brakeless sled.

Yet for all the modernity of skeleton — it was reintroduced to the Winter Olympics lineup only in 2002 — scientists are still deeply puzzled by it.

The other sliding sports provide clearer paths to victory. Bobsled drivers steer by pulling on two pieces of rope attached to a steering bolt. Lugers steer by flexing their calf muscles and gripping the sled’s handles. But skeleton racers can guide themselves with only the subtlest of shoulder shrugs or foot taps. The slightest twitch can help or hurt by altering the athlete’s aerodynamics in ways that athletes, coaches and researchers are still trying to decode.

“There are even times when I just use my eyes,” Katie Tannenbaum, a skeleton athlete from the Virgin Islands, told The Times in 2018.

Skeleton was invented on a bit of a whim, according to the International Bobsleigh & Skeleton Federation. The sport started in the late 19th century on the Cresta Run, an icy outdoor track used for sledding in St. Moritz, Switzerland, when recreational sledders began careening down headfirst. And although the name “skeleton” fits a sport that would seem to invite death head-on, it has murky origins; it may have arisen from a poorly Anglicized Norwegian word or the steel sled’s sparse, skeletal appearance. The sport appeared in the Olympics in 1928 and 1948, when the games were held in St. Moritz.

The physics of the sliding sports — skeleton, bobsled and luge — are simple. “It’s gravity that pulls you down the track,” said Timothy Wei, a mechanical engineer with expertise in fluid dynamics at Northwestern University, who works with skeleton athletes. “And all the drag forces are slowing you down.”

Much of the sparse, nonproprietary research on skeleton concerns the sprinting phase of the sport, where athletes run to generate velocity while pushing their sled across a short distance before jumping aboard. Scientists have investigated the ideal number of steps, the ideal step length and frequency and even the ideal angles of the hips, knees, ankles and thighs during the running phase. But scientists know far less about the mechanics of the more terrifying phase of skeleton.

There are many reasons.

The sliding is physically brutal: Athletes endure four to five G-forces of pressure around turns and must withstand the rattling vibrations of the track. In luge, athletes wear a neck strap to hold up their head under high G-forces; bobsled athletes, seated, are enveloped by their vehicle. In skeleton, athletes experience the elements face-first, all while tucking their heads down to remain streamlined, chins hovering just inches above the hard ice and eyes straining upward to visualize the track.

“You can’t do more than two to three runs per day,” Dr. Wei said. “And by the end of the season, for one or two months you just can’t think clearly.” So while a runner can practice running whenever they like, a skeleton athlete is able to skeleton for only a few cumulative hours per year, if that; with few opportunities for testing, skeleton runs are logistically difficult to study.

It’s not easy to get to a track for practice. The International Bobsleigh & Skeleton Federation lists just 17 tracks around the world, all located in the Northern Hemisphere. This exclusivity creates economic and environmental barriers for sliders from other countries hoping to train, let alone make it to the Olympics.

And the tracks are often serpentine, winding like roller coasters, making it difficult to keep a continuous eye on an athlete as they barrel down the track. The track at the Yanqing National Sliding Center in Beijing, also called “the Snow Dragon,” has a 360-degree turn. From Dr. Wei’s experience, watching a race means “you just watch these guys sprint and disappear into a tunnel and they’re gone.” He added, “There’s no way to know exactly what the athlete is doing along the entire track, and to get data off it.”

But in a race where victory margins are typically a few hundredths of a second, it’s crucial for athletes to understand the aerodynamic forces slowing their slide, in order to minimize them. With your face pointing toward the ice, it can be hard to know whether tweaking the position of your foot or sliding up or down on the sled actually shaves off precious time.

Enter the humble wind tunnel. More than a decade ago, Dr. Wei built a system that simulated the drag resistance that athletes experience in an actual skeleton run. He constructed a mock section of a track at the exit of an open wind tunnel with sensors embedded in the floor, near which he mounted a mock sled. The sensors tracked the drag forces and weight distribution of the athletes.

Athletes mounted a mock sled, braced themselves against the gusts of wind, and were able to view in real-time how slight adjustments of their body affected their speed through a plexiglass window on the floor of the tunnel.

Dr. Wei also conducted tests using a theatrical fog machine and illuminated by a green sheet of laser light. He tracked the movement of the fog particles to reveal how air swirled over the athletes’ bodies and heads, in the hopes of gaining insight into further ways of reducing drag.

Ms. Tannenbaum, who is set to compete for the Virgin Islands this week, worked with Dr. Wei’s wind tunnel to prepare for Beijing. (There are no bobsled tracks in the U.S. Virgin Islands.) “Where is the drag coming from?” Dr. Wei wondered. “How much of it is from the sled itself, and how much is from Katie?”

A wind tunnel cannot replicate the surprises of a real track, where certain elements — the tiny bumps on the ice, the wind conditions, the outdoor temperature — will always be out of the athlete’s control.

Part of the beauty of skeleton, compared with the other sliding sports, may be that it asks athletes to relinquish total control over their destiny on the ice.

“Even though it looks completely insane, in many ways it’s the safest of the sliding sports paradoxically because you have so little steering control,” Dr. Wei said. Oversteering in these sports can often lead to a crash. Luge, where speeds can top 90 miles per hour, is considered one of the most dangerous sports in the Olympic Games.

Until the Olympics opens to the undead, the sport of skeleton remains in the domain of the living. And though the athletes may look as still as corpses, there is nothing more resolutely alive than clinging to a steel plank, sliding 80 miles per hour toward the center of the Earth, over and over and over again.