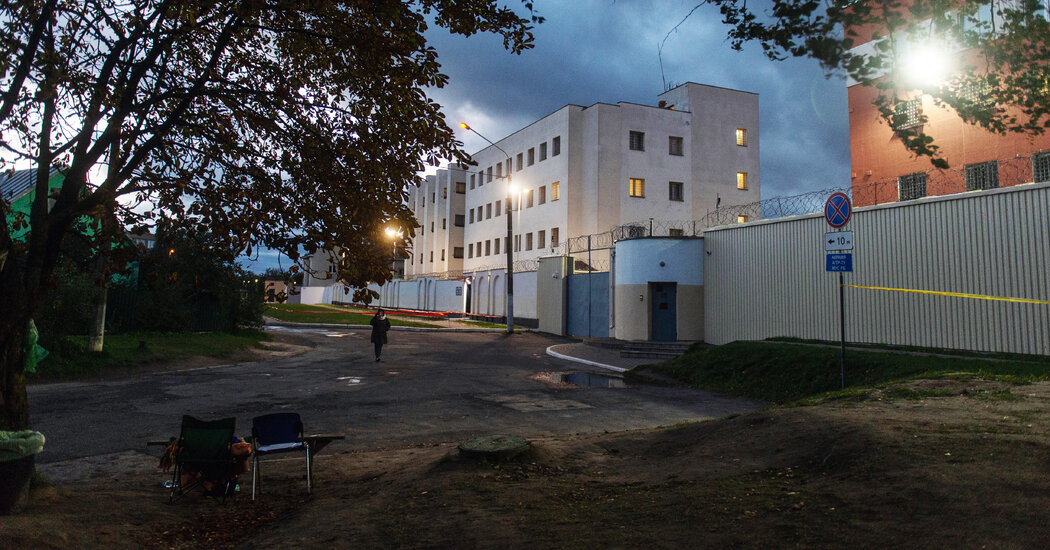 MINSK, Belarus — Appalled by savage police violence at the start of Belarus’s would-be revolution, the host of a popular morning show on state television quit his job in protest and declared that his country’s veteran leader, no matter how brutal, would never “force Belarusians back into the box they existed in for these 26 years.”

Arrested soon afterward and held in a grimy prison, the broadcaster, Denis Dudinsky, reappeared a few days later — this time with a video message calling on opponents of President Aleksandr G. Lukashenko to stop protesting.

Asked what made him change his mind, Mr. Dudinsky declined to go into details, just remarking obliquely that “these people know how to formulate their requests in such a way that you cannot say no.”

After nearly three months of protests that began with widespread anger over a rigged election, Mr. Lukashenko seems to be surviving the challenge to his power. He has managed this not just through harsh police tactics, hollow promises of reform or the passage of time. Rather, he has relied on a more insidious and often invisible machinery of persuasion, coercion and repression: a domestic security agency little changed from the Soviet era that, indeed, still uses its old Soviet name, the K.G.B.

“Over the past 26 years, Lukashenko has created a system of suppressing dissent in Belarus that instills the feeling of animal fear in people,” said Pavel P. Latushko, a former culture minister and onetime ambassador to France, Poland and Spain.

It controls a network of spies and monitors — known as “curators” — who oversee every establishment in the country, from schools and businesses to the presidential administration. Its agents collect compromising materials on just about anyone suspected of disloyalty and eavesdrop on the conversations of senior government officials to make sure they toe the party line.

Workers at factories and other state-run operations, which employ more than 40 percent of the country’s work force, risk losing their jobs if they are suspected of being disloyal, one of the reasons Mr. Lukashenko maintains a quasi-Soviet economic model.

“You understand well that if you express your point of view, you will be held responsible,” Mr. Latushko said. “You can be reprimanded, or face an administrative or criminal case. In the worst scenario, you can be destroyed physically.”

Some of those who get arrested refuse to submit to the constant physical menace. When Mr. Lukashenko met a group of high-profile political prisoners recently during a visit to a K.G.B. prison, he was shouted at by one of the inmates — Sergei Tikhanovsky, the husband of Svetlana Tikhanovskaya, the opposition leader who ran in the presidential election in his stead after he was jailed.

“You, release me now!” he exclaimed.

But others took a softer line. After two months in the hands of the K.G.B., Yuri Voskresensky assured Mr. Lukashenko that he was seeking compromise and ready to act as a mediator.

Quickly released from a prison he described as “hell,” Mr. Voskresensky began hailing Mr. Lukashenko as a “strong leader” and an “open person,” and said the K.G.B. saw “a great potential” in him. In a stunning about-face, Mr. Voskresensky, who suffers from chronic diseases and had to receive regular treatment while in prison, urged opposition activists to stop protesting.

“We have two systems of law in the country, the one for normal crimes, such as murder or rape,” said Andrei V. Sytko, a former high-ranking prosecutor. “The second parallel system is driven by politics. The whole vertical of power from a police officer to the prosecutor general and the Supreme Court is working to defend the current political regime.”

And while Mr. Lukashenko does not manage that system from day to day, people within it pursue their tasks with a zealotry born of fear of the president.

“Officials are afraid of his righteous anger and are ready to commit punitive actions voluntarily,” said Mr. Sytko. “For them it is better to punish and overdo.”

In order to cement their loyalty, security officials get stable, if not lavish, salaries, with subsidized apartments and mortgages.

But there is a catch. Police officers and investigators who quit lose their pensions and are forced to pay back the bonus they received after their last contract renewal and tuition fees if they graduated recently.

A graduate of the Interior Ministry Academy owes about $10,000 for each year of study, a sum that is written off with every year of service, said Andrei I. Ostapovich, a former senior investigator and graduate of the academy.

“It is difficult to get there, but much more difficult to leave it,” said Mr. Ostapovich, 27, referring to the law enforcement system.

Following a violent crackdown on protests after the Election Day in August, Mr. Ostapovich wrote a resignation letter in which he said that riot police members “were the only people who provoked violence” and that they executed “criminal orders.” Shortly after, he fled to Russia, but was warned that he might be arrested there too.

He decided to flee to Latvia but was detained by Russian security services and driven back to Belarus in handcuffs with a dumbbell attached, he said. Once in Belarus, he escaped detention and had to walk through forests and marshes for days to reach Poland.

Law enforcement members also get brainwashed, said Yevgeny I. Babak, a former assistant prosecutor in Minsk. Every week, he says, he had to attend “political information” classes where he had to sit through state-run propaganda news shows and fill up an “ideology notebook” with the main takeaways.

Despite the brainwashing, many law enforcement officials still faced a difficult choice: whether to take part in the brutal crackdown on protests in August or step down and face the risks. In June, Yevgeny M. Yushkevich, a former senior investigator, launched a project to help mitigate these risks, offering financial help and training for law enforcement officers who wanted to quit.

While working as an investigator, Mr. Yushkevich, 31, was asked to launch criminal investigations against political activists and journalists. (He says he refused.) One of the more common tactics was to find a link to a pornographic website in a target’s phone and charge the person with its distribution, a criminal offense in Belarus, he said.

Judges routinely make politically motivated rulings. Aleksei V. Pasko, a judge in the Pinsk district in the country’s west, quit his job after he realized how many “political” cases he would have to hear after thousands of protesters were detained.

“I just got tired of all this,” said Mr. Pasko, 32. “I just decided that my moral compass wouldn’t allow me to do this in such circumstances.”

Lawyers, the only actors in the system with some semblance of independence, are regularly threatened and harassed and sometimes have their licenses revoked. Maria Kolesava-Hudzilina, an acclaimed lawyer who has been defending jailed protesters, says she was often warned during visits with her clients that she “might not be able to leave the building.”

“If we take the 20th century in Europe, we are dealing with one of cruelest regimes that existed,” said Sergei Chaly, who worked with Mr. Lukashenko at the beginning of his career and is now an analyst of Belarusian affairs. “This is the type of evil that Europe hasn’t seen for decades.”

As of this writing, weekly protests against Mr. Lukashenko are continuing, with more than 1,000 people detained at a demonstration in Minsk this past Sunday. For some, like Anatoly A. Kotov, who worked in the presidential affairs office until late August, the opposition has been eye-opening.

The party line “has come down to a very simple idea that we don’t serve the Belarusian state, we serve Lukashenko personally.”

However, most members of what he termed the “semi-military regime” that Mr. Lukashenko built still cannot afford to take the side of the protesters.

“If you leave this system, you have nowhere else to go,” said Mr. Kotov, 40, speaking from Poland, where he was forced to flee.